1. �I have probably been on DToid longer than you

People like it when you gloat right off the bat, right? �Well, I am figuring its probably true, given how many people I recognize from my early days. �I learned about the site through my roommate freshman year of college in 2006, so I have been a member at least 7 years. �I remember Retroforce Go, Rev Rants, Rose Tinted, 2 reviewers reviewing one games, and drunken developers melting in the comments section after receiving a 1 out of 10 from 2 reviewers. �It was good times, and for a while it really did feel like the soul of Destructoid has left. �I do want to say that after the real talk moment from Dale, I have been enjoying the site a lot more. �DToid has gotten me through many a boring day at work, school, and home! �I have apparently written about 130 blogs, with my first being on 7/21/2008 (and it is currently hidden, due to my deep shame of my earlier works). �I stuck around because there is a fantastic community, especially off the front page. �I�m not super active in any part of it, as I live too far away from civilization for NARPs, Cons, and other such events, and I am too shy to get involved in the forums.

2. �I worked in a Chinese Restaurant in High School

This is just because I like to talk about this job - it was pretty insane. �The owner paid all staff under the table, so the job was 100% cash. �Most of the reason why the other wait staff were around is because they owed money to the boss. �Why did they owe money? �One of the regulars was their drug dealer. �I saw a lot of drugs in that freezer. �I also learned a few casual phrases in Chinese to yell at the chefs, including �you don�t know me� and �I own you� as well as picking up some conversational Spanish from the other chefs - �your mother is a whore�, etc. �We were constantly understaffed, even on critical days. �One year for Valentine�s Day we had 2 waiters staffed for 50 or so tables, so 25 each. �Eventually it stopped being service and started being triage. �Oh yeah, the other waiter spent some time panicking in the bathroom while shooting up heroin. �But at the end of the day, a good paying job and free Chinese food were well worth the cost of admittance, and I actually had a good time overall. �If you want a link to videogames, the owner has an obsession with the band ABBA and would play it all the time. �I would be forced to listen to it over break while playing the manager�s copy of...Ghosts and Goblins. �It was two kinds of hell.

3. �I voluntarily live in Des Moines (and its pretty great) 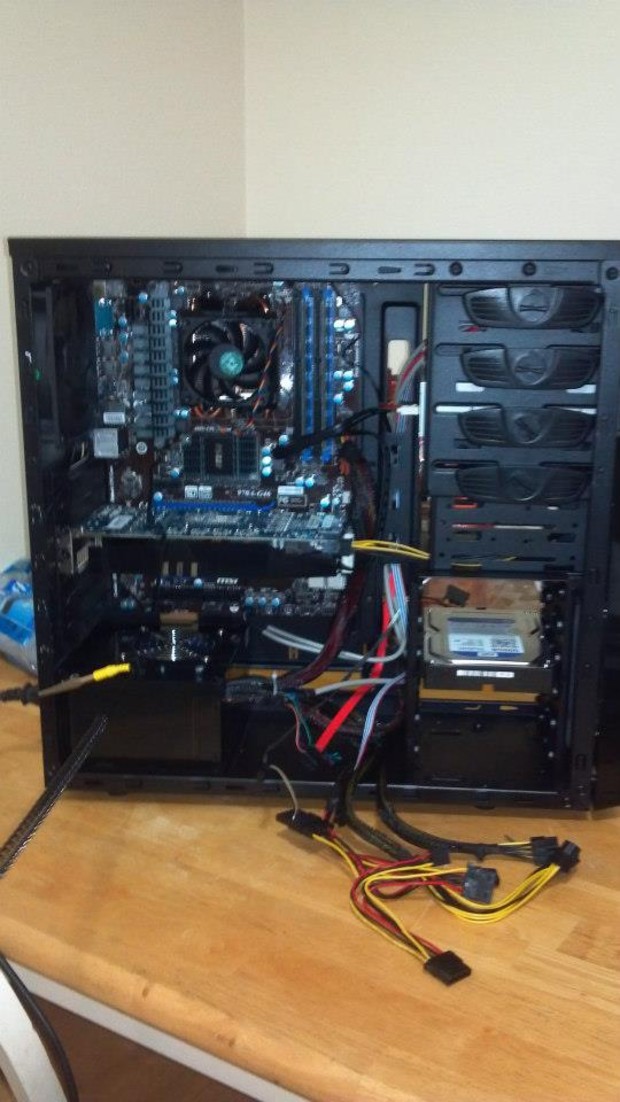 They grow up so fast!


Speaking of computer magic talk, I build my own PC last year and much my surprise, it hasn�t caught on fire yet! �I started looking at getting a gaming PC two years ago, but I kept getting annoyed at the cost and the specs. �I decided to be really diligent about the research at stores like Best Buy. �I learned about the metrics that were important (MHz, Visual memory, RAM). �I didn�t know what any of it meant, but I could tell you which pre built had more of one than another pre built, thats for sure! �Eventually, I found a benchmark site that I would use to compare the specs. �But I realized they all sucked, and I could build it for cheaper myself, if only I knew how. �Protip? �Real talk? �YouTube is the best. �There are thousands of experts at our fingertips for the most insignificant of all problems. �Newegg had a series on how to build a computer, so I watched that multiple times. �I settled on a build. �As they shipped, I took apart an old laptop to get a feel for what a processor looks like, how it goes into the slot. �Then I put together my entire rig with my laptop on instructions on my left, South Park on the Wii U on my right, and Seagrams 7 in front of me. �It wasn�t easy, but I really think with enough research anyone can do it!

7. �I know a joke for almost any occasion

I think over my life I have memorized thousands of jokes, but any time I get put �on the spot� to say something funny, nothing comes to mind. �However, if people are talking about almost any subject matter, I think I know a joke that is related to it. �Recently in the comments there was a demand for a vampire/menstruation joke, and I actually know of one! �As long as you can deliver jokes properly, it doesn�t matter how nerdy or awkward you are, you have something that you can do at parties. �Some of my favorite memories from events in college were when we just had a group of us outside, sipping on beers, taking turns trying to outjoke one another. �And yet is always amazes me when I hear a new one! �I think my go to favorite is usually �a man walks into the doctor�s office. �Can�t stop singing the Green Green Grass of Home. �Doc says �well that sounds like Tom Jones Syndrome� �Man asks: �Is that rare? �Doc: �Well, Its Not Unusual�. �Its so esoteric. �I love it. �

Most of the video views are me


You can watch it if you want. �I don�t like to advertise too much with it, but Ill probably throw more stuff up there if there�s love for it. �I played through all of EDF: IA, most of Dark Souls (lost the passion in two separate runs right at the end), Sniper Elite: Nazi Zombie Army 1 and 2. �I think in my mind I want to be a �someone� on the internet. �There are a lot of big names, even on Destrucoid alone, and I just want to feel like I am one of them. �But, as I said, I don�t like to advertise much because it feels pushy, so for now Ill just post the videos to all the twelve people who want to see them. �Love you guys, forever and always! �I also have a twitch, but that is really awkward. �With youtube you know that someone will be watching, and wants to hear you talking. �With twitch, it feels like you have to be �on� the whole time, but you know that people aren�t watching and you are just talking to yourself. �With momentum it could be good. �I would like to get together with one of my friends to commentate scrub tier level DotA matches for fun, and I also would like to have a Destructoid radio game show going...but those require motivation and scheduling and man, that is a hassle!

A lot of people, myself included, think its pretty silly to be proud of your heritage, but I figured this would be something interesting to talk about here. �My great grandfather, and I think my grandfather, moved over from Denmark and brought a lot of traditions with them. �There was a lot of odd Danish phrases thrown around in my youth, but mostly its just down to using it for silly arguments. �We still carry over a lot of strange traditions, especially around the holidays. �There is a cucumber dish that is basically pickles, but not quite pickle-y enough to be real. �And plenty of stink fish that no one really eats. �Overall though, it has gotten me into a few tasty foods (pumpernickel bread), a few fun words (frikadillers), and some tasty alcohol (kijafa), so I�m pretty content with it.

10. �I used to swordfight in High School

In choir, nonetheless. �We had a medieval dinner kind of thing for choir, so we included all kinds of juggling and swordfighting things to amuse the people who showed up. �We had the bamboo swords to go over what it would look like with real steel swords later, so it was really common to good off with those. �We played a game where if you got hit in a limb, you couldn�t use it for the rest of the fight, and you were dead if you were hit in the chest. �It was super fun. �We also had some foils, so we did a smaller amount of fencing as well, but not in any kind of professional manner. �That kind of one on one fighting has really made me appreciate tournament fighters, because it reminds me of those days. �The biggest similarity that I see between the two is that the technical execution is significantly less important than the mental aspect of it...reading your opponents, knowing the right counter at the right time, being one step ahead. �Although, I never could get past the technical aspect of those games, so I mostly like to sit on the sidelines and pretend like I�m knowledgeable.
#Off-topic
Login to vote this up!