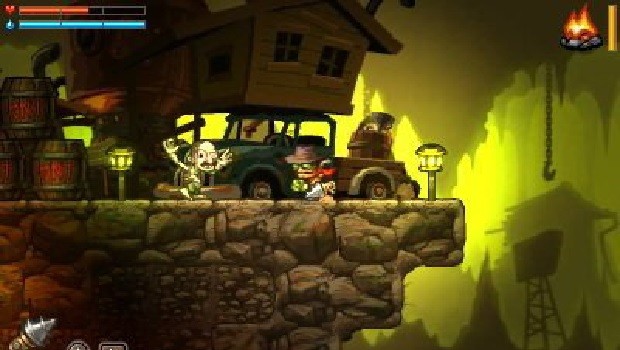 Side-scrolling action games have seen a resurgence in recent years, and games with any sort of mining theme are continuing to push their way into the market the wake of MineCraft. So it's only natural that a game other than Terraria would come along and combine the two. The execution here is sound, opting for a use of non-linear level design over total random-generated freedom.

Though overwhelming at first, you'll soon find yourself exploring the mostly-destructible world with ease. Jumping up any wall makes moving a breeze, and money you earn from mining is used to purchase upgrades that help you progress further and further into mine. Some of the limits placed on you can make progression move slowly, but the game feels so nice to control that I didn't really mind having to backtrack to a way to escape to the surface. It did get annoying at times though, especially if you're like me and turn back every time your inventory of minerals fills up so you can sell them off and buy upgrades.

While it's easy to move around and progress through the mine, the game will make you pay if you don't think about what you're doing. Though frustrating at first, I soon came to appreciate the game's ruthlessness. It's never unfair, and really it's not even particularly hard, but it doesn't cut you any slack. You learn the game's rules, you learn how to deal with the enemies, you learn what will kill you. You have to, or you'll die. It ramps up nicely, though I did find that the second half of the game got easier as it went.

Overall, SteamWorld Dig feels like what could have been a successful game in the heyday of the GameBoy Advance. In 2003, this game could have been selling in stores for $40 and it would have been a good purchase. In 2013, it launched on the 3DS for considerably less and it's worth every penny. Though not a perfect game, I found enough to like that I have no problem recommending this game to anybody that can appreciate a good 2D action/adventure title.