As a longtime fan of the series, I was excited to see Square Enix revitalizing the series after so long a time. Unfortunately, the newest entry in the series fails to meet the high standards set by previous entries. 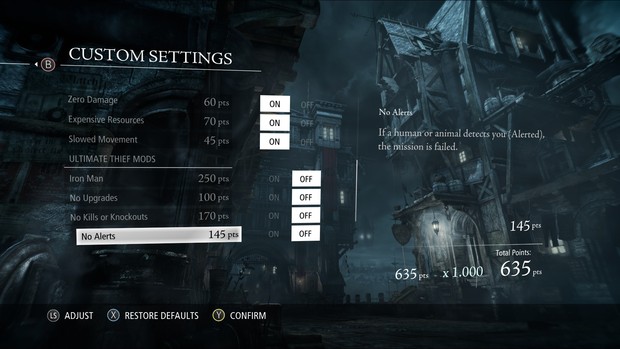 Each story mission and client job gives you a score at the end of the level. You can go back and play each mission whenever you want which adds a lot of replayability. Or you can set up a custom difficulty for a new playthrough that will give you higher points than any of the default difficulties.

One of the saving graces of the games are the client jobs. These missions are a series of non-story related missions that take place on their own maps. Currently there are a handful of client jobs to complete for a sideshow owner and an Engineer. The engineer has Garrett steal a series of parts to create his perfect automaton. While the sideshow owner has Garrett recover some of the attraction that were stolen from him after the Watch impounded his boat. Both clients have missions with level designs, dialogue, and treasure which are all better than any of the story missions. It�s simply unfortunate that the levels themselves are so much smaller than the story levels. The bank job DLC is also well done and a joy to play if you decide you want to check it out.

Overall, Thief is not a terrible game, it�s just a terrible Thief game. If you�re a fan of the series, you�d be better off setting aside expectations that this might meet the grandeur of the previous three games. It does not. If you can treat Thief as its own individual product, you�ll find a decent stealth game with some fun stealing thrown in.

Thief has some good ideas and the client jobs hint at how good the game could have been.� In all honesty, I hope Thief gets a sequel. Even with its missteps the Thief reboot is still salvageable, but the odds are that Square Enix will push this series back into the shadows.