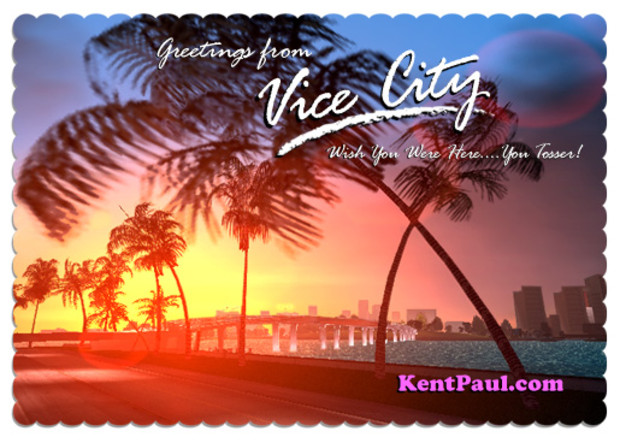 I couldn’t very well end this list without a shout-out to the GTA series. The children of the incredible men over at Rockstar Games, they are unrivaled masters of world-building and Americana parody. My main problem was trying to decide which of their many offerings truly characterized the best example of their work within the series. In the end, I decided the only clear option was the one that best showcased their own talents by matching up equal parts of real-world location with a heavy dose of their own imagination, serving to heavily romanticize and exaggerate that time and place: the Miami-inspired ‘Vice City’ in the year 1985.

A neon-drenched metropolis of bright colors, towering buildings, beautiful beaches and moral ambiguity, Vice City represents the glitz and glamour everybody thought that the 1980’s was. Much like the real Miami, it’s a boiling soup pot of Haitians, Latinos, drug kingpins, shady politicians and beautiful women that’s just ripe for the taking by anti-hero Tommy Vercetti. It’s not the biggest or the most grandiose of the GTA worlds, but just as with the other two GTAs of the PS2 generation, every nook and cranny of the world had something to find and every square inch was full of an incontrovertible character. A lot of people who lived their most formative years in the 1980’s are still utterly in love with that time period, and this massive virtual playground, filled with almost endless diversion and entertainment, exemplifies the best qualities of that entire era in a way that made many of us younger kids fall in love with it, too.

Even eleven years and now two generations removed, we still can’t get the beautiful memories of our time in Vice City out of our heads, which is a special mark of greatness in the gaming world.

What game worlds based on real-world locations are your favorite, or do you feel deserve more credit? Sound off in the comments below!

[Mr. Popadopoulis writes for the fledgling gaming news site GamingDeath.com under the name Kaleb Medel. You can check his and his friends' other articles and stuff here.]
Login to vote this up!