Game Controls Once Intimidated And Confused You As Well

11:00 AM on 03.10.2014 (server time)    0
In this age of "everybody is gamer" or "nobody is a gamer, the word is stupid", depending on who you ask, one of the things that often comes up is the complexity of modern controllers, which would would be "intimidating" to newcomers. In response many gamers typically sneer at the assertion. I mean, WTF, right? What's so terribly complicated about a few buttons and a couple of analog sticks? Surely nothing that any moron can't learn with some effort, right?

How a standard controller probably looks to a non-gamer.

I wasn't too fond of the notion myself, and it is true that, really, anybody CAN get used to it with some effort. But then I realized that, looking back, not only did I have the privilege to learn games since their infancy, when inputs were super simple, and then organically follow the evolution in control methods, I too was confused by changes to controls I was familiar with. If I had never played a game before, I'd most likely be one of the "morons" who are "afraid" of controllers.

This is how I used to play FPSes.

The above image, a keyboard (duh!) is all I used to play Doom 2, my very first FPS. If memory serves, I moved with the arrow keys, strafed by holding alt, and shot with left ctrl. Are you missing anything? Yep, no mouse. This was the standard for me and I didn't question it for a while. When I started to play online and went looking for tips to improve my game, one of the first and most common advices was to play with a Keyboard AND a mouse, AKA standard FPS controls today. A mouse, WTF? Sounded weird, but sure, if the pros  suggest it, I might as well try it. How hard could it be?

Pretty damn hard, as it turns out! It was confusing and disorienting, and to put it mildly, I sucked at it. So I was faced with a choice: I could persevere with those horrible new controls and put up with not having fun with the game in the hope that I'd be awesome at it if/when I mastered this new monstrosity, or I could retreat to the sweet, warm embrace of familiarity. Guess what I did? Yes, I probably don't have what it takes to win a Nobel Prize, but oh well.

And for as long as the games allowed me (Duke Nukem 3D, Quake!), I played FPSes exactly the way I played Doom. Only when such controls were so outdated that games not only didn't include them anymore but were designed with mouse controls in mind (for instance, the height of your shot was no longer automatically adjusted) did I force myself to learn the "new" (by then pretty old, I'm sure) controls. I sucked at it, and hated it at first, but eventually I mastered it, and in time it became second nature. Most of my earlier game life, however, was't on PC, it was on consoles, and a SEGA Master System was my first, thanks to my Strabism and an eye doctor that recommended my parents give me a "Atari" (meaning any videogame) to train my bad eye. That doctor either gave me an amazing gift or ruined my life, lol, but anyways... see how simple it was? Two buttons and a D-pad. That's it. Instantly accessible to literally anybody, pretty much zero learning curve. The SNES controller was the next step, and it adds plenty of new inputs to master. This time we have 4 face buttons AND two triggers! I remember marveling at the time how amazing it was that a videogame controller had "so many buttons". However, I already had years of practice with my trusty Master System, so I had little trouble adjusting to the SNES. 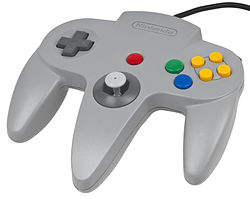 WTF IS THIS STICK IN THE MIDDLE?!?

After the SNES, my gaming life was dominated by the Playstation, but I also had a N64 (for which I owned less games in its entire lifetime than I already do for the Wii U. Kids these days have no idea what a real "drought" is lol!!). The Playstation controller was, at first, exactly like a SNES controler with 2 extra triggers, so I didn't need to learn anything. However, the N64 came with that awful monstrosity in the middle that is known as an "analog stick".

When my wife first tried a videogame with me many years ago, she was frustrated that she couldn't even keep "little Zelda" (aka Link. I think I told her, but I'm not sure she really registered that "Zelda" isn't the kid in green!) on a straight path. Funny as it was to watch, I remember having the exact same problem, to the point where I avoided the analog stick whenever possible. I distinctly remember having trouble playing International Superstar Soccer 64 with the analog stick and sticking to the good old D-Pad instead, no pun intended. Again, in time the analog stick became the default move control and I got used to it, but it wasn't love at first sight by any means.

Holy shit, now there are two of them!

Not long after, that one analog stick had an offspring, and some maniac somewhere thought it would be a good idea to make me use two of them! Worse, they expected me to use them AT THE SAME TIME, like, walking with one and moving the camera with another. What the heck do they take me for, a bloody computer?!?!?

In the beginning, the few console shooters tried to make it work with no analog sticks. Even those who did use both, like Medal of Honor on the Playstation, had a simplified control scheme that worked similar to how Doom did without a mouse, and that's how I got used to them. None of that move with the left, aim with the right nonsense!

Guess what happened? Eventually, a game came along that forced the now standard controls on me, and I had to really learn them. I hated it at first, but eventually they became second nature. Again.

Someone who fits the description I gave in the first paragraph might read this and say "aha! see? You (and most of us) had to make the effort to learn, but you did, why can't those filthy casuals"? Well, of course they can and do learn if they really try, but the crucial difference is that, when a new controller or control scheme came along and gave me a hard time at first, I was already in love with videogames.

When I tried my first videogame, it was instantly accessible. There was no friction, no steep learning curve, no effort required, it was literally pick-up-and-play. And as videogames grew more complex, not only did I have the benefit of having years of practice with what came before, I was doing something I loved. It is a very different scenario from someone trying out a modern videogame for the first time. They don't have fun because they suck at it, and we never like sucking. And they don't "love videogames", so  don't have much of an incentive to put up with it. Maybe they'd really get into it once they learn it, maybe not, but that's often not enough motivation. And looking back at my own history, if the very first game I played used all the resources of a Dual Shock 3 instead of a D-pad plus 2 buttons, I might have been easily put off as well. None of this is to say modern controllers are "wrong" or should be redesigned to look like a NES controller for the sake of the new audience, not at all. Some people do seem to make the case that dualshocks are "a problem to be solved", which is frankly stupid. Game controllers aren't complex as they are to make sure no infidel outsider stains our exclusive community, they are as they are because the games themselves require them. Plenty of games use every single input available in a dualshock, including L3 and R3, and would never work without serious compromises with anything less.

What it does mean is that it is perfectly okay to accept that modern controllers are off-putting to newcomers, and it's perfectly okay that some games have simple control methods hoping to attract that new audience by lessening the barrier of entry. We don't need to be hostile to people who don't see a videogame controller as an extension of their limbs, and we don't need to attack games that cater to those people. They don't threaten our Dark Souls, they don't threaten our Lollipop Chainsaw. We can all happily coexist.

In other words: next time you're having a good time saying that only stupid people would struggle with something as "simple" as a videogame controller, remember that you were once new at this whole videogame thing too, and no different than any of them.
Login to vote this up!