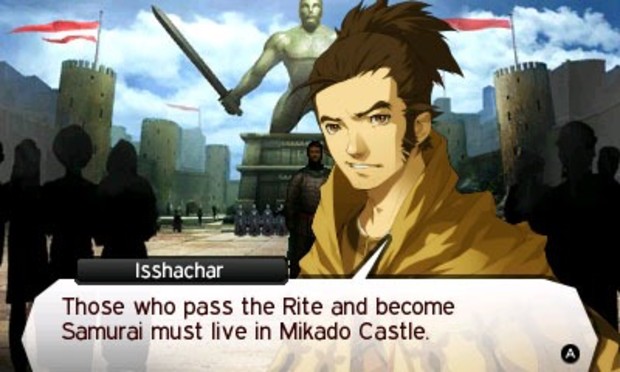 Bravely Default came out. I played the demo, liked it a lot, and got a JRPG itch I knew the full version would probably be able to scratch. But I only have so much time, and only so much money. It didn’t make sense to run out and buy Bravely Default when I have a perfectly good copy of SMTIV to scratch that itch. They may be very different games, but they both still let me visit a world filled with turn based encounters and dungeons to explore.

So I went back to Shin Megami Tensei IV. I was in the forest area near the start of the game, and couldn’t remember which way to go. After a few minutes, and a few fights, I got my bearings and trudged on. I played through the story event in the forest, and things got interesting. It was an easy fight, I had been grinding a bit before I stopped playing months earlier and didn’t really have any trouble at all. The game was just how I remembered and fairly seamless to jump back in to.

There was one difference though: the look of the game didn’t bother me anymore. I don’t know what it is, maybe just having time away from it then returning? That’s the only thing I can think of. I no longer saw the single-image-demons as a single image. I saw it as a tool for your imagination. Like a picture from a Dungeons and Dragons book. It was starting to click.

The whole game, really, has a lot in common with a D&D campaign. Mechanically they don’t share much, but you do have to use your imagination in SMTIV. It does some of the work for you, but there aren’t many moments where you witness cinematic action or even any sort of animation that isn’t just overlayed effects. You essentially need to use your imagination to picture what these battles may actually look like, what it might be like to actually walk through Mikado. Still, I was hoping for the game to eventually let me move around and explore in 3D.

“Don't get discouraged by the early town navigation, which relies on menus.” Dale North wrote in his review for Destructoid. “Trust me -- it really opens up in a big way.” With this in mind I continued on, coming across what is considered the first real boss battle in SMTIV. I died. I spent 2 hours leveling up my character and main demons. I still died. I figured out an element the boss was weak against, though, and that was what I needed. I needed to breed a demon at a high level (high for that point in the game) that had an elemental spell of the correct type. So I did, and the fight became easier. This was another “click” for me, learning where SMTIV differed from other RPGs. RPGs where weaknesses do matter, but they’re rarely this make-or-break. It’s rare in other RPGs that you get completely annihilated if you don’t make sure you’re doing the most efficient things. And the buffs! They matter this much in this game? He makes my accuracy drop and now I can’t hit him at all? What?

So I learned. And I’m keeping on learning, even with 30 hours under my belt. The game requires some serious strategic thinking, and punishes you when you make mistakes. But with save-anywhere and the ability to buy your progress back (with in-game currency or Play Coins… which I always have a lot of), it never feels like it wastes your time. Honestly, it’s brilliant. I love it. Dale North may have overestimated how long it would take someone like me to look past the simple presentation, at least in this case, but his promise of a more open experience kept me motivated to push forward. Now I love the game mechanics so much, I don’t think I’d even care if it was all just menus. Maybe after I finish this game I’ll go back to that copy of Persona.
Login to vote this up!