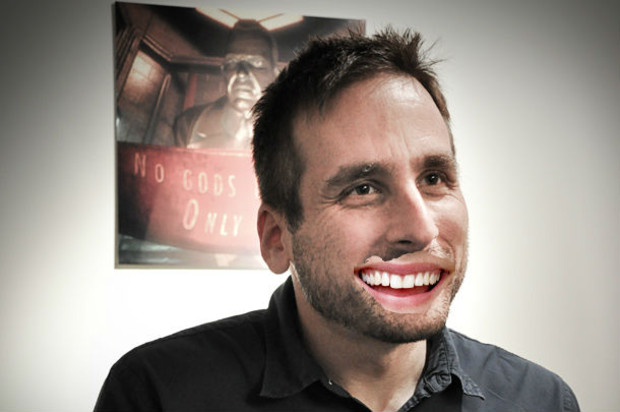 CB:�Thanking ye, Kenster. Where do you see the�Bioshock�series heading, now that 2K have declared they will continue to develop the series in your absence?

KL:�I have nothing but admiration and respect for the fact that 2K will continue to milk the fine, doe-eyed heifer that is my beloved life's work until they squeeze out every last atom of creamy goodness from its succulent teats.

During restless nights when I cannot beddy-byes no matter how tightly I squeeze Teddy No-Shoes, I have considered what the next�Bioshock�would look like.

I have envisaged a pattern played not above, nor below, but upon the waves, in a scenario where humanity is not thriving, but struggling.

The world is nearly fully covered in water, the society they once knew is totally destroyed. The last remaining hopes for the species have found sanctuary upon ramshackle settlements using technology salvaged from the distant now.

But then, I realised that I was describing Kevin Costner's�Waterworld.

I once thought of the main character as an outsider in a world in which he feels out of place and under constant scrutiny� but the city is on a vast electronic database that half the world are plugged into� abilities are downloaded into people electronically� because it's all�digital, you could slow down time� you slowly uncover that many elements of the environment are under your control, for your benefit�and the big twist is, that the whole experience is controlled by one person, voiced by Ed Harris�you know? From�Apollo 13? That would be pretty sweet. I hope they do that.

CB:�Ken Hom, you are a legend. If I could have one final question?

The twist is� the steak is actually you, who died in the future and was brought back to the past, cooked, and filleted! You are eating�yourself!�Delicious!

CB:�Kenny Rogers, 'tis been a pleasure.

KL:�The pleasure was all ours. Or�was it?�I'll leave that for you to decide.
Login to vote this up!