There were a fair amount of excellent titles I didn�t get to touch until December or January, and I had to give them some time to see if they earned a spot on this year�s list.

Getting into fighting games consumed a large chunk of my 2012. As less of those came out in 2013, I got to spend some more time exploring older titles in my �I Suck At Fighting Games� series. I even went to my first tournament! It was incredibly fun, and I learned that I�m not as bad as I thought�but still pretty dreadful.

I didn�t get my hands on any new consoles or handhelds, but 2014�s lottery numbers are looking pretty good.

Luckily for me, a ton of great games came out on the few platforms I do own. So here�s fifteen games that made me smile. Not to play favorites here, but these are in order from worst to best, and those �Honorable Mentions� are really just there to keep up appearances.

I'm joking. Play them all!

I enjoyed these five games, but not quite enough to stick them on my list. I still recommend them all.

Why I Like It: Grant Kirkhope�s soundtrack is excellent. The game has the sense of whimsy of old Mickey Mouse cartoons. The platforming is challenging, but doesn�t get overly difficult. Great difficulty curve overall.

Why It Didn�t Make The List: It�s a little short. Some of the bosses cause unfair deaths due to screwing up the camera.

Why I Like It: Fantastic art style, especially the character design. The facial animation is great! The story is paced so well, and built up in a way that had me almost begging to know the secrets of the world. The ending is poignant and stuck with me, even with all the nutso sci-fi stuff going on.

Why It Didn't Make The List: Just like Bioshock 1, I rarely found the combat enjoyable. They limit the salts so much that I couldn�t experiment with vigors as much as I wanted to. You end up shooting bullet sponge enemies with a small variety of guns, which got boring early on. The boss fights and encounters against larger enemies like Handymen were thoroughly frustrating.

3. Brothers: A Tale of Two Sons

Why I Like It: Visually gorgeous. They successfully build up the characters and the story without any actual dialogue. The rope-swinging section was one of my favorite segments of the year. They use the mechanics of the game to build up to an ending sequence so powerful that it made me cry.

Why It Didn't Make The List: I got hit by a pretty bad glitch that forced me to restart a chapter. The controls never felt 100 percent natural and even got frustrating at some points.

Why I Like It: It has a great training mode, good tutorials, and individual character tutorials to ease in fighting game newbie like me. There�s a good difficulty curve that lets you mash early on but rewards you a lot for learning actual combos. I mean it REALLY rewards you, as a good punish can chew up 50% of your opponent�s lifebar in an immensely satisfying combo. The cast is huge but somehow the characters all play uniquely. It kept me thinking about new combos to try or teams to experiment with, even when I wasn�t playing it.

Why It Didn't Make The List: The game came out in 2012, so I legally cannot add it. The gem system is overly complex, and the online mode seems to lag even in ideal situations.

Why I Like It: The dynamic score that changes in response to the action is pretty much the coolest thing ever. My favorite song is on the soundtrack. Sometimes, it�s really funny. The acting is top notch. Trevor Phillips is an unforgettable character. The heist missions are incredible. The visuals are far beyond any other game, and I love driving around just to look at stuff. When you put on flip-flops, you can see them flop and flip on your feet as you walk.

Why It Didn�t Make The List: GTA Online is not good. Some of the humor is really forced and obnoxious. There�s too much boring travel between missions and the fast travel options are inconvenient. Planning heists hints at having more depth than it actually has, which makes the heists a bit less impressive. 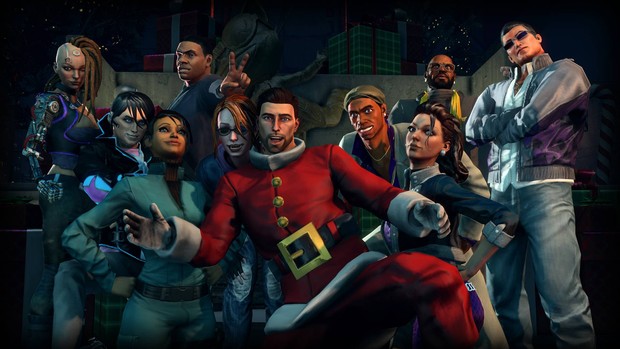 Aw man, it�s just like being in a Video Game! Wink!

Get comfortable, because there�s gonna be some story time with this one�

Saints Row: The Third was an awesome game, by far my favorite of 2011. It was also the most disappointing game I played that year when I compared it to its predecessor. A majority of the customization options were removed compared to Saints Row 2. The city of Steelport lacked the variety of Stilwater. The sequel hooks in the end of Saints Row 2 were ignored, and some of the main characters began to act weird. I still enjoyed the game, but I couldn�t stop thinking about how much it lacked compared to Saints Row 2.

Saints Row IV also doesn�t have the enormous suite of customization options of 2. The dark tone of Saints Row 2 is almost entirely gone, and any attempts at resolving the plot threads of that game were thrown away.

And you know what? I am completely okay with this.

Saints Row The Third started the turn away from darkness and toward sillier fare, and it has completely taken effect in IV.

The amount of call backs to every single game in the franchise had me smiling through the entire experience, to the point where any leftover bitterness I had about the series changing too much vanished after the first cutscene.

Saints Row IV is one of the funniest games I�ve ever played, even disregarding the self-referential stuff. The use of licensed songs for jokes and the more absurd jokes (see: QTE stripping minigame) are great, but what brings it all together is the sharp comedic timing. It�s surprisingly subtle humor, especially compared to how insane the premise is.

I love to laugh, and humor in games is so difficult to pull off because everyone might not experience the game the same way. The writers in this game got it totally right.

With the addition of loyalty missions and �romance� scenes, it�s easy to compare Saints Row IV to the Mass Effect series. IV feels like a game-length version of ME3�s �Citadel� DLC, being a tribute to the universe and the fans that have been with it for years.

But while Mass Effect 3 bored me halfway though, Saints Row IV�s gameplay is consistently entertaining and varied. It�s a �greatest hits� of modern open world games, refining the parkour and flight of Prototype, the super powers of Infamous, and its own solid shooting and upgrade system.

I can tell the developers and testers watched this game closely to make sure the players were doing something fun at all times. Sprinting and flying around feel great, making the simple act of traversing the city enjoyable. It gives new life to the reused city of Steelport because you�re exploring it in a completely different way.

This game allows you to break the balance early on and upgrade yourself to the point where combat is trivial. It may not be a difficult game, but I am perfectly fine with �make it fun� as a philosophy over �make it tough�. Most games don�t let you feel like an unstoppable badass in the way Saints Row IV does.

Most games don�t jam the world so full of stuff to do. I spent so much time hunting down the Crackdown orbs, audio files, and climbing up alien towers. There are sidequests everywhere, and they�re all so enjoyable that I would actively seek them out to complete them. It�s not a particularly long game, but it does such a good job of handing out fun stuff to do that every minute feels essential.

I�m not sure if there can be another Saints Row game after this, or if there even should be. But after playing these games for almost a decade, it completely fulfilled all my expectations.