For those that don't know/remember/blocked the experience from their mind and this will bring up some horrible repressed memories, Tony Hawk's Ride was the first Tony Hawk game that required the use of a proprietary skateboard controller and here is the beast now: 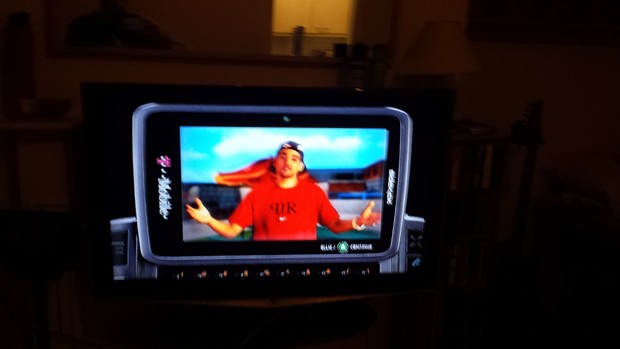 The maps are verts or some narrow corridor. WHY?! It's bad enough when modern FPS games shove you down corridors but a skating game? I want to explore, not be hand held, but as soon as you push off, hell breaks lose. The board isn't wide enough for someone with a size 12 UK foot which means it's hard enough to control as it is, but the sensors, oh lord the sensors.

You need more space than Kinect to really use the thing because those sensors will just go off at anything that comes even close to any of the sensors. Every ollie seems to result in an Indy grab... Wait, grab? That's right, something the tutotial didn't even touch on and with good reason. if you actually try to grab the board while leaning, your fingers will be crushed when you come back down on it which is a terrible design flaw.

In spite of all this, when you get a good trick run going finishing with a manual with a fingerflip, it feels really good for brief moments until you get the horrible visuals back in your face when you've stopped concentrating on the board. Then the next time you attempt a run and the sensors go mad again. That's where the anger comes in rather than just laughing at a bad game: It has potential. If that controller worked and they designed some levels worth playing, this could have actually been enjoyable, but nope, Activision had to churn it out as quick as possible.

Party mode could also be fun, but it's the same few modes and you just take it in turns. Why is there no HORSE mode? That was an obvious slam dunk.

Shred was also 50p and being delivered soon. I'll see if that's any better, but I don't think the problems are purely software based. Still, this time I'll try seeing if getting drunk first will add to the enjoyment.
#General-Opinion/Editorial
Login to vote this up!