4:37 PM on 01.09.2014 (server time)    0
A few weeks ago, I posted a response to a fellow gamer's blog on Spine Online on the perception of female gamers today.  While I understand what she was trying to say, I argued that her post was a myopic viewpoint on an ultimately dated issue.  However, the biggest point of contention I had with her blog was with her very first post, "Hardware Hardship."

What's worse than trying to promote a blog that goes to bat against the ways "we" judge a gamer? How about making a blog that generalizes these "rules," coyly draws passages from a work that doesn't even exist, gets one of these generalizations completely wrong, and uses a comic completely out of context to make a point.

Before you think I'm being harsh on some teenage blogger from high school, realize that this is the work of a 28 year-old college student promoting a journalism blog to further a career.  A blog she posted that's open for everyone on the internet to see.

A blog I just happen to disagree with.

Most gamers you see talking on websites or chatting online or speaking in real life don't make it a point to own every console - the average person usually sticks to one brand and maybe, if they can afford it, buy a second console sometime down the road.  Even then, why would you buy more than one console? The vast majority of games can be found on nearly all the major consoles at the same time.  The make-or-break point of which console you own depends mostly on the exclusives; you can't get Halo on Playstation, you can't play God of War on the XBox, and you only get to catch Pokemon on Nintendo's machines.

The actual problem arises from vocalizing over the internet what consoles you own.  Depending on where you go, you'll get a very wide range of results ranging from "i like playing the wii, love playing smash bros" to "the wii is a joke, only grannies and kids play it."  Fanboys/Fangirls exist because they subscribe to the brand (Nintendo fanboys, Sega fanboys, Sony fanboys, etc.) to justify their purchases and to fulfill the need to belong with like-minded people.  THESE are the people screaming about, spewing garbage about why their console is the best, insulting and arguing with everyone, and otherwise acting like spoiled children.

In fact, I doubt that these console fanboys/fangirls would even exist if they had the opportunity to own every console or, barring that, if every game was available on one console.

What about those who own every console? Does that make them more of a gamer than you or I? Of course not. Realistically, it means they (or their parents) had lots of money to burn, but I think we can all agree that a gamer is somebody who spends their leisure time playing games - nothing said about "what" games or "how many," but that they play games as a means of enjoyment.

It certainly helps, however, to foster a more open mind to the many different games and genres out there on the market by owning all the major consoles, because then there's no risk of blind fealty to any particular brand and you're able to try any game you want with the console-exclusive barrier-of-entry completely removed.  But good luck actually affording them all, let alone all the games you want with each.

And that's just it: you don't hear people saying they're "real gamers" because they own every console, but that they're "real gamers" for owning a Playstation or an XBox or a Wii. They can't afford them all, so they stick to one brand and proclaim it's the best thing ever, because they want to validate their purchase by any means necessary, as well as join with like-minded individuals who also seek validation for their purchases.  Even then, for those occasional few that brag about owning every gaming device on the market, the usual response is either "cool story, bro" or "nerd."

"But what about that comic that was posted?  The one with the Zelda-fairy and that cat?" 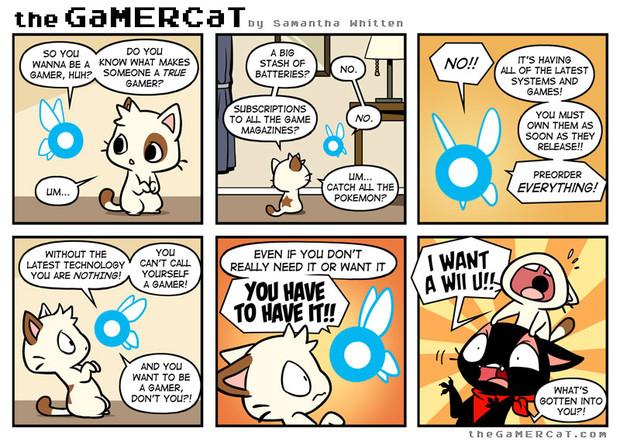 If you read "The GaMERCaT" (great comic BTW, wished it updated more frequently), you'll know that Annoying Fairy (styled after the infamous Navi from The Legend of Zelda: Ocarina of Time) does everything in her power to try to get GaMERCat (and eventually, Glitch) to buy stuff.  Not only does she play the role of the smart aleck and trickster in the comics, she also serves as a parody to the nature in which many businesses goad you into buying superfluous products (Doritos and Mountain Dew with bonus experience-point multipliers, I'm looking at you).

In the case of that comic shown, Annoying Fairy was just manipulating Glitch into trying to spend more money on things he didn't need.  Considering Glitch is new to the gaming scene and is very naive, this leaves him wide open for her trickery.  This isn't some commentary on some popular trend of gamers berating others for not owning gaming device, but yet another ploy by Annoying Fairy to coerce others (read: you) to buy into the game industry's schemes of having to buy everything to get the most out of gaming - something you actually don't need to do to have fun, much to the industry's chagrin.

Soon after the responses came pouring into her blog, she decided to delete the entire comment section.  Perhaps she was trying to save face in front of her peers; however, she didn't even respond to any of the comments that were made, let alone refute any of my claims.

That's fine.  However, I will not tolerate wannabe journalists manipulating sources and pulling out passages from non-existent works to prove a point.
Login to vote this up!

I enjoy many different games and franchises but, above all, I love talking about the PokĂ©mon series the most - so much that I started my own website after making a few blog posts here!