Holidays and the Wii U

8:43 PM on 12.29.2013 (server time)    0
Howdy everyone!  Hope you all enjoyed the holidays! Mine were, in a word, interesting.  First of all, you have to know that I live in Iowa, which is about six hours away from my original home back in Illinois, so I had quite a commute to go.  In addition, I wanted to see one friend who had some intense personal drama, had to deal with families, manage poor weather, and keep my sanity with my family for the week that I took off of work...meaning there’s going to be plenty when I get back.  So I thought, knowing my own Christmas list and plans for the week, that I would break out the ol’ Wii U for the trip, and get some more mileage out of the system.

I was actually a day 1 buyer of the Wii U, a decision which I don’t really regret because I have disposable income.  However, since I built my gaming PC in January (see above: disposable income) I was in no rush to play pretty much any console games.  Not to be elitist, but most multi platform games that exist will run better and be cheaper on PC.  Long story short, I played NSMB U, Rayman, and half played a few other games on the console, so I was actually interested in giving it a fair shake, especially with some of the stellar titles coming out this holiday.  I know I had asked for the new Mario and the Wind Waker remake, among other things, so I figured I would have some time. I needed something before the actual holiday, though, so I decided to pick up a game that I had previously played, hated, demoed, hated, and generally knew I didn’t care for:  Monster Hunter 3. 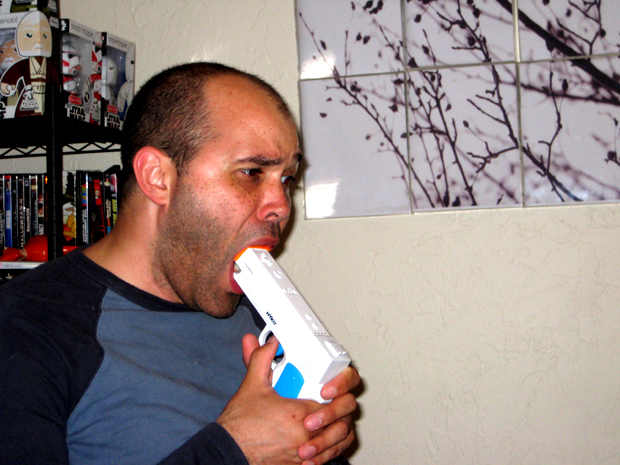 
So lets talk about the Gamepad, good and bad.  Bad?  Short battery life.  About 3-4 hours.  And when I get to 2 bars I worry about death in the middle of a long encounter, so I was at about 2 hour sessions, and then 1 hour of charging before I got sick of my family again.  Not ideal.  What was really nice about it though was that I was playing in the living room where my folks were watching TV, and was able to play entirely on the gamepad.  I didn’t have to lock myself away in a room, secluded during the holidays (as much as I would have liked to at some points), but instead I could carry half conversations!  The screen is a little bit too small to get some of the finer details visible, like your location on the minimap in MH3U, but the game was clearly designed to be played with gamepad only - there is a ‘zoom in’ feature for the minimap!  The controller is very conducive to ‘the claw’.  I often forgot where my fingers were resting moments before, but then remembered that the claw is simply the best way to play almost any 3d game.  Embrace the claw.  Love the claw.  Overall, I was very happy with how the off screen play worked in general.  Specific to MH3U and Wind Waker, it needs to be better communicated.  the Minus button in Wind Waker switches between gamepad and tv, and in MH3U, it is buried deep within the options.  Not impossible, but not intuitive.  Easier with the help of a full screen, a luxury that I didn’t have.

Then I went to my super Danish Christmas Eve celebration, which I will explain here because diversity and holidays.  We have some odd traditions, and odder family members.  For starters, the Christmas tree is decorated in red and white heart baskets made out of paper.  There are many patterns, and they range from a simple checkered style to some amazingly intricate designs.  It isn’t uncommon that my grandfather puts up a string of Danish flags going around the tree similar to how the lights are set up.  Dinner is more or less American style with the exception of dessert.  We have a dish called ‘citronfromage’ (citron from osh ah is how I hear it pronounced).  It is kind of like an orange flavored pudding, but a little firmer and lighter.  Whoever makes it hides a single almond in the dish while it sets, which is then the ‘object’ of the dessert:  whoever finds the nut wins a prize!  And just to be cruel, you hide the nut when you find it to make everyone stuff their already bloated selves trying to find it.  The traditional prize in our family is a marzipan pig.  After digestion and coffee, we then sing songs while dancing around the Christmas tree, ending with “Jingle Bells” because of reasons.  I really have no idea why...then gifts, and finally returning back home to feed the dogs - and play more video games!

We use a really far removed recipe for the citronfromage, so it doesn't look much like this, but this is what google gave, so hey.  There it is.


Even after receiving more games for the Wii U, I found myself drawn to Monster Hunter.  Mario was fun, Zelda was good as always, and Rayman is still a treat to play, but Monster Hunter was just...the best.  It is like a condensed Dark Souls.  Find the rare stuff, find the boss, kill the boss for a long, long time.  The game is rarely cheap - each move has a tell, and larger monsters only have a few moves.  All of your actions have to be deliberate as attacks have a very small area that they hit, and every single thing has an insane animation window.  Want to sharpen your sword?  You have to unequip it, find a whetstone in your inventory, then sharpen for what feels like 2 seconds (without getting hit), then wait a second while you admire your work (getting hit is annoying, but not end of the world).  It rewards caution and patience very well, basically, and isn’t something that many other games offer.  Granted, I am only at the 4 star quests now, so maybe it becomes a dick later, but I spent 17 hours over the course of a week playing it, and hell, that isn’t half bad.

I finally hooked up my Wii U to my normal TV today to see how it holds up on a larger screen.  First off, I had an issue with my HDMI cable, in that the Wii U and TV refused to talk to each other.  After trying to change every setting on both, I finally resorted to the stupidest idea that came to mind and switched which end was plugged into what device, and voila!  it was fixed.  By the way, googling support on this problem is infuriating.  It seems to be fairly common, but most people just ask questions like ‘is your tv HD?  Is it plugged in?  Are you sure its plugged in?’  People on gamefaqs forums aren’t 80, alright, internet?  C’mon.  After addressing that issue, I really like the way that everything looks.  I’m used to equating jaggies and Nintendo so much that how good MH3 looks in 62” HD glory made me smile.  And HD Wind Waker?  Yum!  Now I associate Nintendo with Jaggis!  Hah.  Monster Hunter humor.  The gamepad features on those two games are also wonderful in my experience so far.  Being able to check the map while sailing without pausing, switching items on the fly, and navigating a pouch full of items all on a touch device absolutely nail the simple possibilities that the gamepad offers, and maybe what smartglass or whatever the hell XBox/PS4 are doing these days.

So basically, what I’m driving at here, is that I think that the Wii U is pretty cool.  It works as advertised on the ‘not hogging the tv’ front, and is pretty comfortable to use.  While not a graphical powerhouse, I think that the HD looks plenty good enough to justify it.  The always excellent Nintendo exclusives, and some of the possibilities with control schemes (gamepad menus, wiimote for RTS likegames) are pretty dang cool.  Overall, after this holiday, I’m really happy to own a Wii U, and I’m hoping to see it shine.
#General-Opinion/Editorial
Login to vote this up!