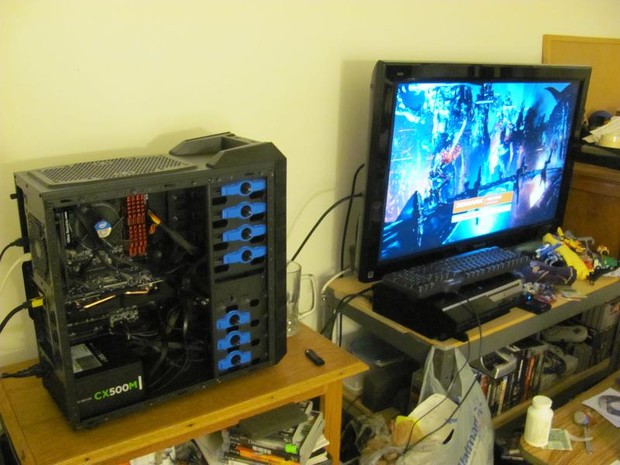 
So after years of saying it was something I wanted to do, I've finally gone and built myself a PC. For the most part everything is pretty great, apart from the fact that it intermittently refuses to recognize the SSD I have installed. So that will probably need to be replaced, and the fact that it occasionally (read: pretty frequently) just decides that it hates everything and restarts itself. Probably just needs a system repair, but we'll see. The joys of computing right? I'm also having a weird issue where certain games will refuse to output to the GPU, preferring instead to use the Motherboard's video output, which is really weird considering it's disabled. But that's what Saturdays are for right? All things being equal it runs great, throwing Metro 2033 at it has been a lot of fun and finally playing Mirror's Edge in the highest quality with amazing AA is really just beautiful. I've got really high hopes for the reboot/sequel/whateverthey'redoing over at DICE/EA. I really hope it isn't as fucked as Battlefield has been though.

I also timed it well and finished it right as the Steam Sale got going, BUY ALL THE NEW GAMES. Not really, but you know how it is. Doesn't really help that the mouse I just picked up came with $40 in Steam Wallet Credit. Yowza!

PS4 is pretty high on my list of new technologies to pick up, and will be the last HDMI Input I've got for my TV unfilled for that matter. But a few other things need to be paid off too. And I need a Wireless headset for the PC, anyone got any good suggestions?

Hope you all had a wonderful Christmas and that your New Year's Eve will be fun! I'll be staying in, mostly because whenever I go out on New Year's Eve I brush close with Death. Long story, well stories really. Needless to say I don't go out for the New Year anymore.

Welcome to the Playstation side of Destructoid's Friday Night Fights! Every Friday, members of the Destructoid community get together online to play games and all you need to join is a user account. Down below, you'll find a list of games that we'll play tonight along with the times they'll start, the people that you should hit up for invites, and any other information that you may need.

If you want to play, leave a comment with the games from the schedule you want to play and your PSN name. You should also send a PSN friend request to the host, including a message to say who you are here on Destructoid so they know you're one of the cool people and not just some random friend request.

Anarchy Reigns with Last Scion of the House of Blue Lions
Time 9pm
PSN Blue_Lion_Scion
I'm thinking that we'll go a few rounds, followed by a 16-player one (maybe two, it depends), probably with bots, and then some Deathball to top it off.

Killzone: Shadow Falls with Trev
Time 10pm
PSN ElZilcho
There's a free weekend going on for Killzone: Shadow Falls right now! Downloading the game through the PSN will download both sides of the game but you can specify the multiplayer first to get in on the action! Don't forget to send Trev a friend request (to ElZilcho on the PSN) and let him know you want to play with the crew!

Dragon's Crown with NeoShinGundam
Time 10pm
PSN NeoShinGundam
It's a good time, but y'all gotta talk! Oh, and seriously, slow down a little you're missing all the good treasure!

Warframe with Trev
Time 12am
PSN ElZilcho
In exciting news rumor has it that someday this will be cross platform compatible! So I can play with you even if it takes me awhile to update from my non-PS4 peasantry.

There Trev, are you happy now? ARE YOU HAPPY NOW?!
Login to vote this up!