4:03 PM on 12.06.2013 (server time)    0
Earlier today Dale North put up an article comparing the various pros and cons of the newly released Gran Turismo 6 and Forza Motorsport 5. The two big console exclusive racing sims that are currently going head-to-head. It's a pretty great article. Go read it, you incompetent nerf-herder. But since I share a passion for this genre too, I quickly felt the urge to write my own comparison too, sounding off on my take on each of Dale's points.


Although, usually I hate the mere mention of this topic. But then again, it's usually discussed by random idiotic fanboys on the internet. I may be just another random idiot on the internet, but I'm definitely not a fanboy of either series. Although I have my preferences, I enjoy both games. It doesn't matter to me what logo is on the cover, I just want to play a great game. But I will say that I've only played GT6 for a day so far, so this is only based on my first impressions of that game right now. I've been playing Forza 5 since release, not that it's been out for much longer, mind you.

The cars in Forza 5 are absolutely gorgeous. They look far better than the cars in GT6, and they certainly sound better too. One reason why I've always loved cars in Forza games is because of what you can do to them, and Forza 5 has loads to do to cars as well. They've blown things out of the water with how many different paint options you can have, and there's a bunch of new crazy engine and drivetrain swaps for cars. Aero customisation options are also far better in Forza than GT. While some cars have unfortunately lost some kits, most still remain. Hardly any cars in GT have kits at all. It seems none of the non-premium cars have them. Forza also has its brilliant livery editor tool, which GT lacks.

But the size of the car list in Forza 5 is a real disappointment. So many favourites are gone. Even though GT has always had more cars, there was still always more than enough in Forza to feel like you could explore a new car any time you wanted. You had a great range to pick from too. Not any more. While the variety and selection is still good, the low number overall really takes away from that feeling of having a sandbox of dream cars to explore and play around with. 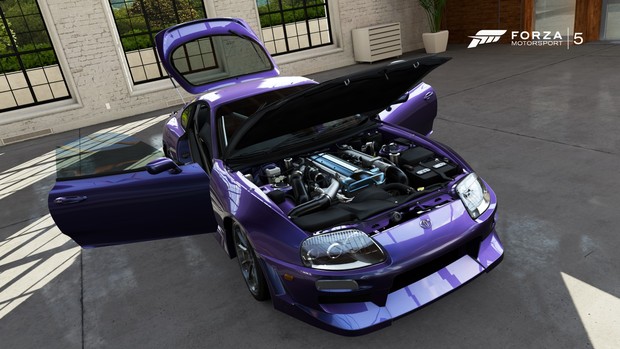 Like Dale, I think both games are pretty good. Despite both having problems, they both have their own values. But for me, Forza is the place I go to both race and drive. But I have a sneaking suspicion that Forza 5 may lose its appeal for me much sooner than previous games in the series have. By then, GT6 will probably continue to have appeal in its automotive toy box. Or maybe I'll be playing Forza Horizon 2, since that's probably coming. Or maybe Forza 4, because everyone else will still be playing that.

If I was to pick between GT6 and Forza 5 on a desert island, I would probably agree with Dale and pick GT6 though, because of its greater breadth of content. But if I had the choice, I'd probably pick Forza 4 over both of those.

P.S. Sorry about all the "left" stuff. Every time I tried to fix it, it just made it worse.
#General-Opinion/Editorial
Login to vote this up!