Seriously, this isn't a sarcastic, cynical “I don't care” post. I am genuinely looking forward this gen as it fully kicks-off now the Xbox One is out, as it's the first one I'll actually be paying attention to from the beginning.

When the 360 and PS3 released they were barely blips on my radar; last generation I was a late adopter, still playing my GameCube up until 2008 before I realised there were consoles other than those made by Nintendo. The same counted for the generation before that.

Nowadays I'm a fervent follower of the goings on in the video game industry as a whole, and new consoles are obviously a big deal. I will be a spectator for the beginning since there are still several PS3 games I've yet to play which will keep me using it well into next year. Also I think it is generally better to wait on getting new releases, be it games or consoles, especially in the current “patch it later” culture in game development.

Now just to be clear, yes, I'm ignoring Nintendo. Although I still love what Nintendo does, though my preference in hardware and games has largely switched to Playstation and PC, I don’t really count them as part of any “console war”. Though of course the Wii U is part of this generation, it's not something that has much of my attention.

Nintendo like to do their own thing, not really directly competing with other companies, which makes them interesting in their own right. But they've had their time in the limelight last year.

This time it's about Sony and Microsoft; a head-to-head rivalry between two juggernauts engaging in a cataclysmic battle, as a couple of Kaiju would in an unfortunate Japanese city. 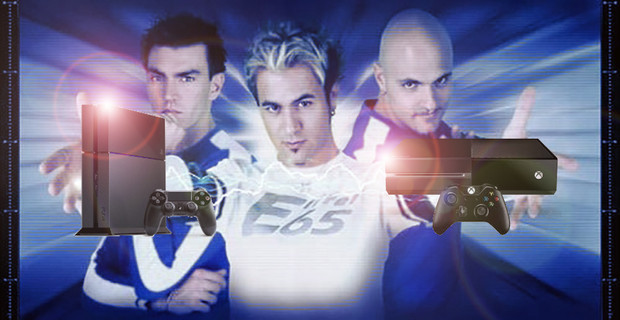