Virtue's Last Reward: What did you predict?

5:30 PM on 11.11.2013 (server time)    0
I finally finished Virtue's Last reward. First of all, it was great. Second of all, it wasn't as good as 9 Hours 9 Persons 9 Doors. Third, there are spoilers galore after the big bold warning below, so don't read past that if you haven't read/played any of the Zero Escape games, but address that deficiency at once! Please. For your own good? 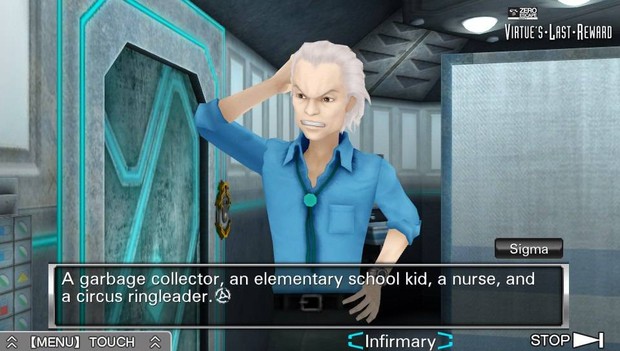 Anyway, I want to ask anyone reading this who has played the games: what did you successfully predict? What caught you completely by surprise?

Here's a list of the predictions I made, some correct, some wrong. (What's with all the lists in the CBlogs, lately?) Here there be all of the spoilers.

Things I figured out very early on:
1) Tenmyouji is Junpei: I figured this one out the first time Tenmyouji spoke to clover for more than a few moments. To be fair, I get the impression players were supposed to figure this out pretty easily.
2) Alice and Clover were in cold sleep: This follows from the previous one and the presence of the treatment pods. Of course, I also thought this was true of either Sigma or Phi, but I'll get to that later.
3) Dio set the bombs: again, fairly easy. Dio simply didn't seem to serve any purpose in the story early on other than screwing everything up, so I figured yep, that's the guy.
4) Dio killed the old woman: Same reasoning, though I couldn't figure out why until later.
5) The old woman is Akane: I figured this out simply because I knew Tenmyouji is Junpei. Again, the writers seemed to want this to be obvious to people who played 999.
6) The facility is not on Earth: I'm pretty proud of this one. I started to think about this when everyone started jumping around 20 feet in the air, and all of the moon related puzzles made me pretty sure. The idea that there needed to be a higher pressure inside made sense in light of the virus, but the many other hints were too much, and the pressure chambers just screamed moon base.
7) The purpose of the game is to stop the radical-6 pandemic: I assumed this to be true once the virus came up. Not really a prediction, just an arbitrary guess that happened to be right. Call it genre savvy.
8) Luna is a robot: I figured this out once I met GOL-M. I assumed someone in the group was likely a GAULEM, and thought K was too obvious a choice. As for the others, Dio didn't seem likely because he seemed to be trying to fuck everything up, Alice and Clover being robots would have been too stupid to justify, Sigma and Phi seemed too important to be robots, and I already knew what Tenmyouji's deal was. Quark I rejected because I hadn't seen a child-sized model.

Things I realized late in the game before they were revealed:
1) Sigma is old: I really should have figured this out sooner; I was assuming that the three cold sleep pods were for Alice, Clover and one other person, and that other person had to be Phi (or no one). It was clear that Phi was young, but we never get to see Sigma. On top of that, the way the other characters interact with him is a pretty big hint (though there was some misdirection courtesy of Alice). I only figured it out just before meeting Akane at the tombstone.

Things that totally caught me by surprise:
1) Sigma is Zero Sr.: Yup, just didn't see that one coming at all. I thought that Zero Sr. was related to the original Nonary game in some way, possibly one of the people who was with Akane, Light and the rest.
2) K is Sigma's clone OR Akane: In my defense, this is arguably the most convoluted part of the story (not to mention a dire misunderstanding of the Schrödinger's cat thought experiment).
Login to vote this up!