I touched some next gen kiosks!

I'd say both, but the Xbox One kiosk was really just the shell of a XB1 with a Blu Ray player in it. There were no games to be played, just a loop of videos to watch.�So XB1 confirmed it can do video things rather than video games. Its�the sort of thing that instills faith in people that their $500 dollars was money well-spent.�

Thankfully, I'm not among them.

Meanwhile the PS4 kiosk, much like the Wii U kiosk before it, had actual games you could play on it. Imagine that!

But first there was the new controller. It feels fairly familiar, except the shoulder buttons and triggers are much closer together like on the 360 controller so you really only have to devote two fingers there rather than the usual four like on prior Dual Shocks. My only real complaint would be the return of the gummy L2 and R2 triggers. Like the DS3 before it, the DS4's L2 and R2 buttons have too much give and that's going to lead to some gameplay misfires (again).

That aside, I played Contrast and Knack. I will say that Contrast is a lot like Wii's Lost in Shadow or the kinds of 2D/3D puzzles the upcoming Zelda: A Link Between Worlds is angling at. Its a little more technically sound than Lost in Shadow was, though the demo did have a bit of framerate stutter here and there while running at 1080p.�

That said, though, I like the mix or 3D exploration and 2D platforming, as well as the whole 1920s/30s setting and aesthetic its going for. It is used very, very well for what time the PS4's timer allowed me to explore it before resetting the system to shoo me away.

You essentially manipulate lighting in 3D situations and then become a shadow and 2D platform your way up to new 3D areas. So its like Lost in Shadow for the prohibition era with 3D stuff in it.

Knack was... well... it felt like what a Crash Bandicoot game would be like if it was very slow, drunk and liked cramming legos together to make a bigger Lego robot. You can move slowly on-rails, slowly smashing things and doing very slow un-Sonic-like homing attacks, evade things slowly with no control over the camera angle or ability to lock on to an enemy. This results in slowly getting hit by things in 2013.�

What I'm getting at is the game is slow.

It looks pretty and could be a great E-rated title for kids and adults alike, but it feels like a sluggish proof of concept more than an interesting demo. This is bargain bin fare, I'm thinking. Don't worry, this game won't get anywhere quickly because it has moves like Snorlax.

As a wise man in Short Circuit 2 once said, "It is slower than molasses in January." 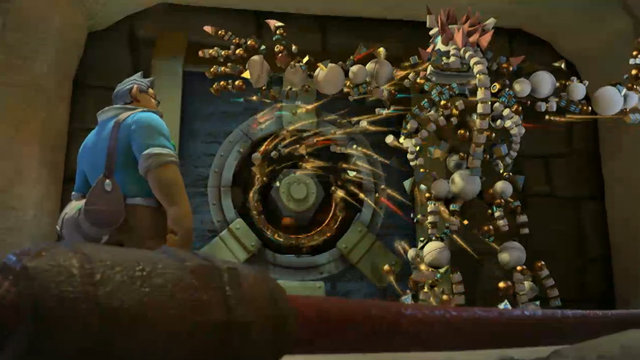 There were some other demos, including a FIFA one, but none of those really interested me to try. The kiosk did have a Vita as well, but I didn't look to see if there was any Remote Play demo there for it. My Vita was dangling from my wrist anyway.

So in summary: I know now that the Xbox One plays videos and PS4 plays games.

Pretty much the same song since E3.

Husky-Corgi is the best kind of dog, by the way. I am off to get Pokemon X now.
Login to vote this up!