11:52 PM on 11.03.2013 (server time)    0
I spoil things a lot for myself. I use guides for games, I look up summaries on Wikipedia, I am online while I am in game. It�s rare that I�m surprised in a game, since I have usually read what happens next. Playing without a guide is more stressful, in my experience, but I think there are a few instances where it was just so much more rewarding. The specific instance I�m thinking about right now was in�Cave Story. 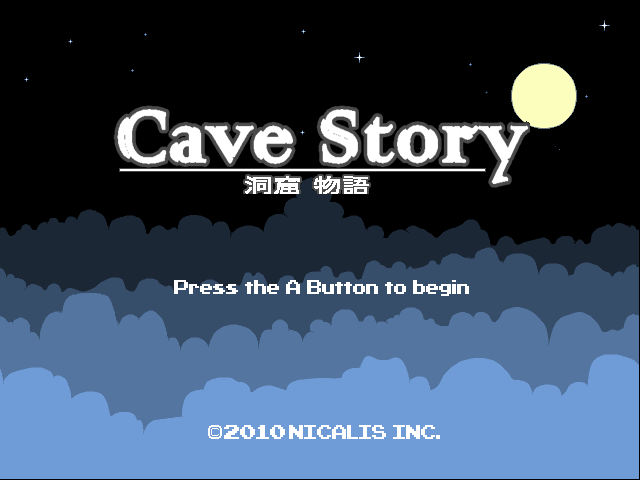 ����������� Cave Story�was released in 2004, and it�s 2013 now. It was originally a freeware PC game and has since been ported to Linux, AROS, MorphOS, AmigaOS 4, Mac OS X, PSP, Xbox, Dreamcast, GP2X, GP2X Wiz, and the TI graphic calculator. For official ports, there�s a port on DSiware, an enhanced port was released for Wiiware, and it was enhanced and released as�Cave Story+�on Steam.�Cave Story�was also remade as�Cave Story 3D�for the 3DS. The point I�m trying to make is that you've probably played�Cave Story�before.
����������� But, for those of you who haven�t played�Cave Story, I�ll give you a short explanation.�Cave Story�a freeware platformer (often incorrectly called a Metroidvania) made by Daisuke Amaya (alias �Pixel�). He made it all by himself over the course of five years, which is impressive since everything is fantastic. The sprites, the writing, the music, the gameplay; everything is fantastic. Anyway,�Cave Story�is a story about a robot in a cave. You wake up with amnesia and start wandering around. As the game goes on, you find out that you are on a floating island, which is populated by a race of bunny/cat people, the Mimiga. On the island is a special red flower; when the Mimiga eat them, they turn into a nigh-unstoppable monster. There�s also a �Demon Crown� hidden on the island, a crown that gives its wearer incredible magical power. Shortly before the game starts, there was a human expedition to the island. Unfortunately, the doctor of their group (since it�s good to have a doctor if you�re going to a mysterious island) betrayed the group, took the crown, and now has plans on world domination. There's really so much more to it, though

����������� I didn't know much about�Cave Story�when I played it first, since I hadn't spoiled it. I had heard it was great, and that it was sad. Eventually you commandeer a dragon with Kazuma, and escape from the island. This isn't just a cop-out ending; it�s set up that you�re looking for a dragon in order to escape the island. Eventually you find one, melancholy music plays, and the credits roll. This seemed like the ending to me. It was a sad ending; the music was sad, and the Doctor keeps the demon crown and will eventually wage war on the earth. If you didn't know what to expect, this was the clear ending. Still, even though I knew it had ended, I decided to do a funny (as in out-of-the-ordinary) thing; I kept playing. I loved this game so much, I didn't want it to end. I don�t know what I was expecting really; I was just messing around a little in a game I enjoyed. I tried telling Kazuma that I wasn't ready to go, and then I went through the door next to him. There was a new area, complete with mysterious, melancholy music. It was clear this was just an Easter egg; after all, the game was over. Maybe Pixel just let you explore another small screen or something. I couldn't go to the right (the direction levels normally progress). I was going to quit the game, but then I decided one more crazy idea; I tried going up.
����������� I fired up my booster 0.8, started shooting my machine gun that let me hover, and something amazing happened; the game kept going.� 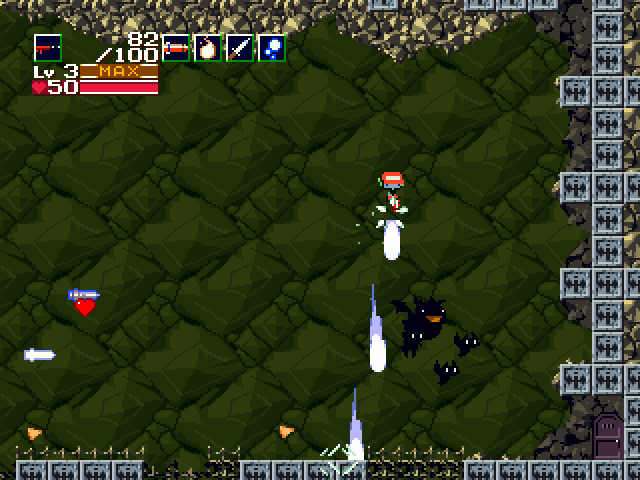 Oh right, you can hover with the machine gun

This was honestly one of the most magical moments in my gaming career. I went up, and the screen scrolled with me. This was one of the most exciting parts of the game for me. I kind of knew what to expect for a lot of the game; I�m not saying it was predictable, but the characters tell you to go here and do this. At this point, I had no idea what to expect. All I knew what that I was going up. I had discovered a secret area, and I wanted to know what was at the end. I thought maybe it would just be a small alcove or something, but something amazing happened: the game kept going. The area went on and on, and I began to wonder if it was really a secret area at all. Turns out, I hadn't actually beaten the game. There were still a few more zones left, and several final bosses. I had fallen for Pixel�s tricks; I thought his bad ending was the real ending. However, since I enjoyed�Cave Story�so much, it didn't matter. Even though I had fallen for his false ending, I kept going.
����������� There are other aspects of�Cave Story�that are better off not spoiled. If you play without a guide, you will get the bad ending. Not the one where you escape the island; this is something I don�t want to spoil. Suffice to say, you will get the bad ending your first time around, but it�ll be worth it, since the bad ending is still great, and the game is short enough to play again with a guide. I've been trying to stop spoiling things for myself if I plan on playing them eventually.
�
What about you? Have there ever been instances where you thought a game was done, and you discovered a huge amount of content you hadn't touched?
Login to vote this up!