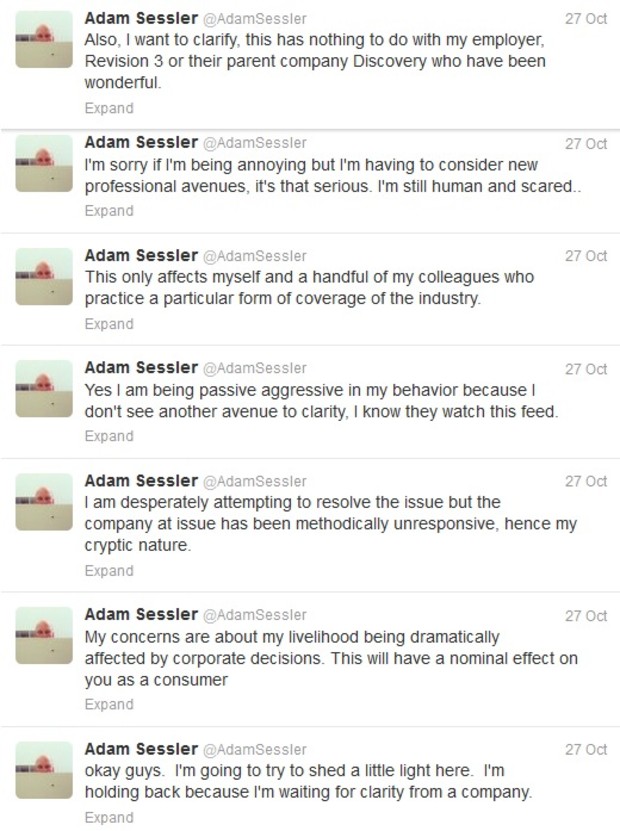 A lot of theories have been swirling around the internet since then stating that the sudden panic attack is tied to the PlayStation 4, especially when Sessler later replied for a few tweets confirming that it had nothing to do with the XBox.
Everything ranging from the rumors of Sony tightening up the ability to edit recorded video of PlayStation 4 games to possible new copyright restrictions to Sony wanting to do limited review sessions over giving out early copies of games have been guessed. However, none of this has been confirmed and it seems that the most web sites are being very quiet. Very few journalists have been expressing verbal concern while everyone else doesn't seem to be saying anything. You would think that with one of the most ironic leaders in video game journalism starts to have a public breakdown, there would be a bit more information shredding some light on its source.

Yesterday, Sessler came out with a new video centered around explaining how Rev3Games would be reviewing the next-generation consoles. He remains cryptic about his Twitter explosion but while not providing direct confirmation, his statements  feed curiosity. It seems very believable that reviewers would be overwhelmed with the massive amount of content that will be needed as both systems are launched. Sessler states that they will be working viciously hard to get their reviews and opinions up as quickly as possible, but one thing is said that may confirm that source of the issue he began hinting at over the weekend. He says that in order for these reviews to be done it does require having the system and the games available for them to review. Upon which he then adds that they are working and hoping and settle any complications that exist at the moment. It certainly does raise an eyebrow, but he quickly moves away from the topic yet that still leaves us guessing a bit, doesn't it?

Since the video was posted, I have seen a few people nearly bashing it. I have essentially seen people complain that Sessler is "whining" (for the lack of a better word) about the possibility that he and other journalists may now need to purchase their review products out of pocket. There has also been some aggression towards Sessler since he is mostly remaining quiet about the situation. So I would really like to take a moment to tackle just a couple of the complaints that I have seen from others while opening the discussion open because frankly, I find it surprising that no one is really talking about this.

I noticed there has been some complaints that Sessler is not being direct with his response. You think you need to remember - and as he pointed out in his Twitter - feeds and videos are monitored. Even if it is a personal, yet publicly displayed account, you need to have some form of professionalism and respect for your employer and employer's partners. That is business integrity 101. He probably does not want to risk bringing too much negative publicity to the situation since it seems like they are still working with the company to fix the problem at hand.  Even though we are aware indirectly that the other party is Sony, he still is respecting the company by not pointing them out and putting them in negative light to the public.

However, as a media source and having an audience rely on him, he (and other journalists) still have a sense of duty to set up proper expectations for their viewers. I am sure he still wants to put his viewers in a position to notice that there is a possibility that they may not be able to provide the latest, update reviews to their viewers just in case there are people waiting for their reviews to decide what to purchase.

We also need to keep in mind that an embargo or restrictions could exist for certain information regarding the system. If a contract has been signed or an agreement has been made between the media outlet and Sony stating that they would not discuss certain things, it is up to the party to follow that rule. Very much like how many employers warn employees to not bash the company or release confidential information on social media networks. Same principle is being applied here.

As someone with some experience in the media field and having worked alongside public relations from gaming companies before, I am a bit torn on this. I understand that not all reviewers are not entitled to free and/or early products - especially with how there are literally thousands of game "review" web sites and YouTube channels. Pretty much anyone with a cheap video camera or HTML skills can claim themselves as video game journalists nowadays it seems; it can be overbearing for a public relation or media relation representative to filter out the smaller, "independent" outlets over media outlets that actually have some sway in consumer decisions. So I can see where it might be easier for a large company to deny access to their products to avoid needing to deal with people begging for free games.

I have heard of an argument stating that businesses do pay for their supplies meaning that games would equal the needed supplies in this case. However, businesses can also run off of partnerships as well. This is how game journalism works at least from my personal experience and having had a chance to mingle with multiple journalist over the years. Partnerships are formed between the developer and the media outlet where the outlet is granted a privileged in order to better drive a product's profit by ultimately advertising that product.

In other words, you need to prove that you are a profitable source for the developer to want to invest in you; and I doubt that sites such as IGN, Kotaku, Joystiq, Destructoid, etc... provide such little profit that a company like Sony would want to completely cut off their resources. Especially when some developers advertise directly on those sites with paid ads which brings me to the next point...

What is interesting about this whole situation is that I have not seen many other gaming journalists come out expressing concerns or fears regarding this situation. Neither on the possibly of not getting early Sony products nor even on the rumored restrictions for video uploading and sharing. I know Sessler's tweets specified that only people "who practice a particular form of coverage" would be effected. This makes me believe that the source of Adam's panic comes from a more isolated incident. Perhaps maybe Rev3Games is having issues obtaining an early system or games. Right now the guess is still in the air...

Regardless, if you know anything about what he now does, he mostly does videos and a very good point was brought up in this video. As Editor-in-Chief and Executive Producer, Sessler has a lot invested in Rev3Games not only for himself but also for his staff. I highly recommend listening to the brief 7-8 minute video because the presenter does a very good job at breaking down how ad revenue works and allows internet-only companies to sustain themselves.

It does not matter if Sony puts up video capturing restrictions, creates a new policy that would make any YouTube video infringe on copyright, or cuts off early affordable access to their products. No matter what route they take or what combination of corporate decisions go into play, a company like Rev3Games is at risk at losing a lot of potential profit. Without the capability to provide the services their audience is wanting, they will lose viewers and readers. A lack of viewers and a lack of readers translates into a less money which translates to the potential layoffs.

I also find it incredibly interesting that retail managers are receiving free systems when there's a chance a media outlet may not. Granted there is no confirmed word on rather or not GameStop managers will be getting their systems before or after release, but I don't think the issue at hand steams from Sony cutting off early review copies of their products. They do not seem to be shy about handing thousands of systems over. Yet this farther strengths my first point because GameStop is the number one (if not only) video game retailer that also has a strong history of profitable success. In other words, GameStop is guaranteed to product customers for Sony and Microsoft from this generous offer.

Right now, gaming journalism doesn't know what it wants to be. It has tried TV and has failed. It has tried paper media and worked for a long time but is now fading into the digital world. A world that is becoming over saturated with video game journalists; people who think they can slap a web site together and automatically get free products. That just is not how the world works and the industry itself has become very greedy over the recent years. It is almost heartbreaking to see something like this forming, especially when Sessler is involved. He has been my inspiration to want to get into the game industry for a very long time and it has already proven to be an incredible struggle to get anywhere. Seeing how it may (or is) becoming harder for game journalists is only deteriorating my hopes of beginning able to follow my dream of being a journalist myself. I guess we will just need to wait and see what happens and hope for the best for those who will be impacted by whatever happens.
#General-Opinion/Editorial
Login to vote this up!