Impressions of Updown, a new barcade in Des Moines

1:05 PM on 10.18.2013 (server time)    0
I mostly just wanted to raise awareness about a new place that opened in Des Moines to anyone in the Midwest community, and also brag about how awesome this place is….although, I’m sure anyone on coastal areas has twelve of these within walking distance, but whatever.  So Des Moines just had a barcade open up downtown, and I took the time to visit, and wanted to give my impressions.

All photos courtesy of: http://www.eatplaylovedesmoines.com/2013/10/up-down-vintage-barcade.html.  They clearly went during 'daytime' mode, as it was much darker when I was there.  And louder.  And drunker. 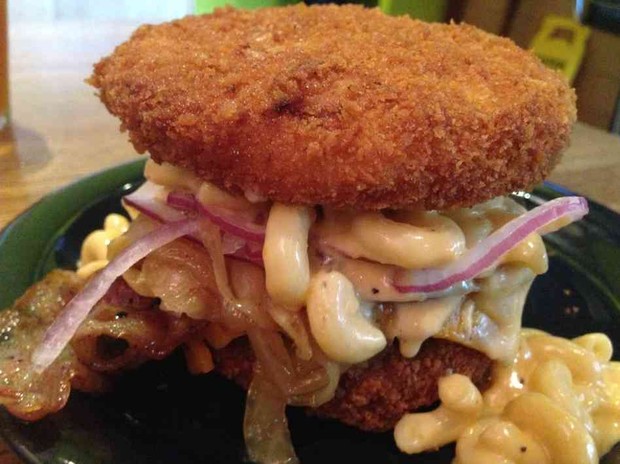 Mentioned below, Zombie burger is just down the street, and it amaaaazing

I want to end this impression with the other things that are in the area.  Updown is in the East Village area of Des Moines, which has some trendy spots.  One is called Zombie Burger, and it serves insane hamburgers.  One burger has grilled cheese sandwiches for the buns, another has fried macaroni and cheese.  The chefs aren’t afraid to try something new, and the bar is insanely good.  There is also Miyabi 9, one of the towns best sushi restaurants, pretty much just across the street.  You can also find a Lebanese cafe, a bar that has live bands and free open mic comedy shows, and a blood center.  If you want to venture another mile or so west, there is Court Avenue, Des Moines line of bars.  You can pretty much find whatever you want as far as a bar in that area (hipster dive, club, German bar, English pubs, brewery), along with another one of the cities finest food spots, Fong’s Pizza.  They have Chinese pizza and tiki drinks.  Chinese pizza includes things like crab rangoon pizza and kung pao chicken, along with honey alfredo, corn and bacon pizza, and other such weird combinations.  Basically, I really like Des Moines as a city.  There are lots of interesting and trendy restaurants, nice people, a large downtown, but without the issues of a ‘big city’...and the new barcade adds some more charm to it.  I encourage you to come and visit the city if you get a chance!
#General-Opinion/Editorial
Login to vote this up!