9:21 PM on 10.08.2013 (server time)    0
It is interesting all of the things that we take for granted when we sit down and fire up a game.  You expect a game to have rules that have to be followed, controls that allow you to control your character, some kind of difficulty that you have to overcome in order to reach a ‘win state’.  These hold constant across all games.  While games like Halo have all of these clearly defined, even a game like Dear Esther has a world where you are only allowed to walk a snails pace, the difficulty of figuring out which path to take next, and a win state of the final cutscene.  However, there is one rather curious thing that not all games have in common:  the ability to win.  Just because a game has an end state does not mean it is physically possible to get there.

Now obviously, there isn’t some kind of new super DLC that I am talking about that gates the ending of a game unless you pay for it...yet (although from what I’ve heard, Asura’s Wrath has come pretty close.  Wait!  Changed my mind.  StarTropics).  But rather, there are some games where it is impossible to get to the win state.  Think about a game of capture the flag where your team of 10 all ragequits, leaving you against 10 highly skilled player controlled characters.  Do you still think you can win?  I would argue that situation is still technically winnable.  What I am talking about is one level worse than technically winnable: 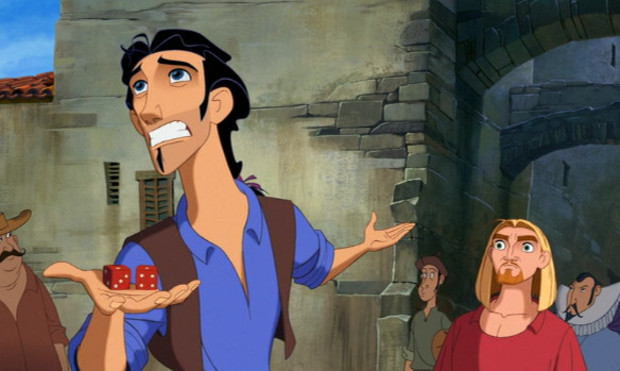 The first idea is trying to play to the highest Expected Value (EV).  Basically, within the context of the game, you are given resources and you have to determine the best time and target to use those values.  This applies to every game:  in blackjack, hitting on 19 is an incredibly low EV in every situation.  Hitting on a 16 may be the highest EV, if the dealer has a 7 or higher showing.  In this sense, hitting on a 16 isn’t the ideal move, as more often than not you will lose.  But then you have to ask yourself:  Could I have won anyway?  If the dealer hits into a 21, I lose no matter what, so might as well try and beat them, right?  Back to videogames, in Counter Strike, the highest EV move may be to throw a flashbang into a room before entering.  You may get the positioning wrong, there may be no players in the room, or the sound of the grenade hitting the floor may alert an enemy nearby to your position...but nine times out of ten, a blind terrorist is a dead one, so you toss it in.  Finally, the Magic example it basically equates to maximizing the potential of each card that you draw - only trading your creatures for your opponents when you have something to gain out of it, or playing a spell that kills a creature...of course, there are juicier targets as the game goes on, so maybe your highest EV move is to simply hold on to that resource.  Now, we get to where an unwinnable game is interesting:  at no point do you know that you can’t win.   If you know that victory isn’t assured every time you play, I think the opposite of what is to be expected happens:  instead of giving up and playing carelessly, we cling to every resource to prove that we could win this instance if we are good enough.  You can go back over every card you played and see if you can mentally turn back 10 turns to view the effect of you trading your first turn creatures for another 5 life by throwing it in front of their seemingly undefeatable monster.  Maybe you will get lucky and draw into something that lets you win, or maybe you can use a card in a certain wait to turn the tide of battle and grind out a victory, but either way, every resource is suddenly precious. And that gets to the second interesting strategy:  playing to your outs. This is actually a really cool mental exercise for any situation.  The concept is basically to visualize how you will beat the game / get the job / save the girl / save the world, and work backwards from there.  In order to beat the flagship in FTL, I’m going to need teleporters and drones. In order to buy a teleporter, I need to find a shop and have enough scrap.  In order to have enough scrap, I need to destroy ships.  Then I have to power it.  The entire game then stops being a series of instances, but a culmination of events that you are planning in order to overcome the adversity and stand triumphant. And how awesome is that!  Looking at a game like Zelda, there are a series of temples that you have to make your way through, but the game gives you the structure in such a way where you can never screw yourself out of success.  Then, take a step further:  Half Life.  You can run out of bullets or health.  BioShock Infinite:  What if you wasted all of your money on powers that don’t help you get past this room?  XCom Enemy Unknown?  That still gives me shudders just thinking about playing it for that very reason.  What if I don’t pick the highest EV move?  What if I back myself into a corner?  All that progress.  But maybe there’s a way to build myself out of it, if I just start hunkering down and making smart decisions.  See, all that does is make you more invested into thinking about what you are doing, because there is an persistant cost of actual failure.  Maybe you can stop it, maybe you can’t.  Its the difference between a high school course and a college course!  Er...playing and caring!  Liking and loving!

In the case of my game against the computer, I knew that my card had two copies of the card ‘Overrun’ - it grows all of  my creatures and gives them the ability to push damage through blockers.  I figured in order to win, I would have to play as defensively as possible, putting all the creatures I have on the board, and just wait to draw that one card to win.  In the meantime, I had to discourage the computer from attacking.

A less viable threat in a digital environment


Remember the Serious Sam example?  1 health remaining?  I played that out, actually, just the other day.  I wound up assuming there would be a health pack a few rooms over, so I figured if I sprinted through the room filled with those stupid monkeys, I could pick that up, turn and fight.  Turns out, there was ten health not too far off.  Then 25 armor.  Then another 10 health.  After about five minutes, and some incredibly close calls, I had actually farmed myself back to about 50/50.

Similarly, in Magic, I drew creatures that could block his creature long enough to draw into cards that could somewhat profitably block the opponent’s creature (I think it was just really, really bad AI, but Ill take it), so he held off on his attack.  I eventually drew into a few of my decks better cards, and was able to stabilize.  Finally, I drew a card that I hadn’t accounted for that was able to clear out about half his board and give me the win anyway!  It was actually really exciting to be so far behind, to think that he had won a dozen turns ago, and come out victorious in the end.

So a funny thing happened while writing this:  I initially thought I was really mad at Magic for being randomly impossible.  In my heart of hearts, it still feels incredibly lame to start up a single player game and know that no matter how well I play I could still lose.  It just seems to defeat the purpose as a whole of playing a game.  Thinking about it though, many games can set up these situations - they are just a little less transparent about it.  You can screw yourself out of victory in any Roguelike, and who knows, maybe there could be an impossible board for it.  But to an extent, it could still be really interesting to go through the experience, holding on to life for as long as you can.  In fact, I really want to see an impossible horror game that relies on the same core ‘feelings’ as a card game now.  Having limited resources, pitted in a world that constantly throws threat after threat against you, never explicitly telling you that there is a light at the end of the tunnel.  How often does that happen in horror films?  A group of plucky protagonists go out to an abandoned cabin, and a crazed serial killer/ plant / alien/ redneck or combination of any of the above kill all the campers except the two that tell the tale.  Who is to say you are always going to be the camper that gets away?

So what do you think?  Is an unwinnable game interesting or frustrating?
#General-Opinion/Editorial
Login to vote this up!