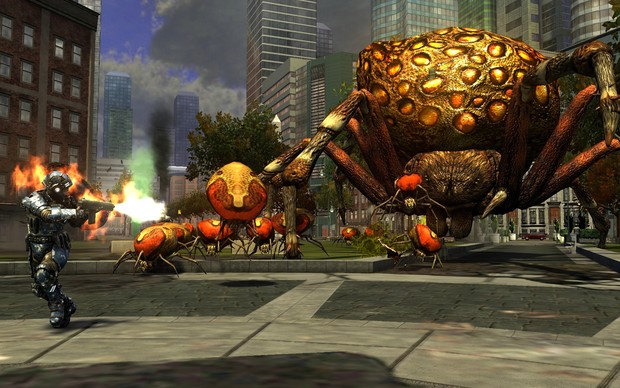 Also, because I had beaten the game to death previously, I wanted to do something to entertain myself while playing it, so I decided to do one of those Let’s Play things I have heard so much about on the internet.  I plan on showing each level off, and the level 8 gun, in beautiful 480p because I don’t understand how the software works.

Allow me to expand on that:  You can get a free software called MSI Afterburner.  This software includes a frame counter and video capture.  Neat!  It has no watermarks or any other ‘trial version’ limitations.  So what makes it difficult to use?  I tried to do a Dark Souls playthrough with it...well...I did do the playthrough, but I tried to upload it.  My half hour clip takes up about 4 GB with the base compression from Afterburner, which is pretty good all things considered.  However, the audio comes as dual channel, meaning there is one track from my microphone, and one from the game background.  For people with good software this would be nice as I imagine you could mix the levels or something.  For me though, it meant that only one track would upload to YouTube at a time, which was a problem.  I could mix the tracks, but then I got a free pass to the S.S. Stuttering, so that wasn’t an option.  So I looked up Fraps, and people complained that it didn’t have split channels, so I knew I was set.  All mixed, all the time.  After double checking that the demo worked, I got a license.  And a half hour clip (recorded at some weird resolution no one should ever use) took up 13 GB.  Which takes about 1000 minutes to upload to YouTube.  And then some to process.

Huh.  Well, I clearly needed to compress the video, which I figured would make it look like garbage.  Fortunately, I had VIrtualDub, another piece of software from the internet that required me to run an .exe file that I didn’t know about previously on my computer.  Awesome.  Protip:  Always run .exe files on your most beloved computer.  They are always not viruses.  VirtualDub had some built in codecs for compression.  I tried one, and the quality was terrible, I tried another and the size was still bloated (about 8 GB).  Not to say it is a problem to wait for ten hours while a video uploads, but I just don’t want to.  So I googled some more and found a video compression codec (x264vfw) that people apparently use.  So I went to a website with a link that told me to download an .exe file to run on my computer.  Awesome!  Naturally I ran it as fast as I could, right before sending my credit card information to this nice Nigerian man.  As far as I know it was legit, and it must have some kind of witch magic installed in it, because holy cow does it work.  It takes 8 GB files down to 500-750 MB files, without a major loss in quality (YouTube kills the rest of the quality).  Also worth noting that between Fraps and VirtualDub compressing, my framerate would drop beneath 20, and this game does not deserve that honor (although chrome is currently running at 8 according to the ticker I didn’t turn off, so maybe…).  So I couldn’t record while compressing videos, which lead to more grinding, which lead to more levels, which leads to more grinding.  So all in all, 3 programs to get game to YouTube in 480p.  All in all, an interesting process to walk through!  You can see the fruits of this labor below if you want: