Imagine you're at a fine restaurant. Your food is delicious, the service is impeccable, and your dining companions provide great conversation. Everything is perfect, and then when the waiter gives you the bill, he spits in your face. Would that ruin the experience for you? It's a small thing, really; it had no effect on the rest of your meal, which you greatly enjoyed. Besides, it's not the destination that matters, it's the journey. However, an unpleasant occurrence at the end of an event can ruin that event entirely. This is what it's like when a good game has a bad final boss; a bad conclusion ruins the entire game. I guess this has spoilers for Scurge: Hive and Arc the Lad: Twilight of Spirits, since I'm talking about their final bosses.
I recently played through Scurge: Hive. I greatly enjoyed most of the game. For those who haven't played it, Scurge: Hive is an isometric Metroid: Fusion ripoff. Bounty hunter Jenosa Arma (yes, really) is sent to a planet where scientists were experimenting on an organism known as "The Source." She gets infected, which is shown in game as an infection meter. The meter gradually increases until it reaches 100%, upon which it deals continuous damage to Jenosa, although the meter is reset at every save point. Enemies have a rock-paper-scissors type of element going; they're biological, mechanical, or energy based. Hitting them with the correct element deals extra damage, and hitting them with the wrong element heals them (or deals normal damage). Bosses also have elements, but can't be healed, so they boil down to using the element that they're weak against. The boss fights are really fun, though. They're huge cybernetic monstrosities with names from Norse mythology and multiple health bars. This is kind of a long explanation of Scurge: Hive, but it's necessary to explain how the game works in order to explain why the final boss was so bad.

An example! Note the health bar at the bottom
The final boss is separated into three parts. Technically the first fight is against the lab's security system, not against the Source, but you fight the Source right afterwards with no break, so it's functionally the same as a boss fight with three parts. The first part is great. It's some sort of sphere monster that separates into three other sphere monsters: one biological, one mechanical, and one energy. Each one retreats into a hole in the wall and you have to guess which copy is the real boss. When you shoot a copy it disappears and releases enemies that are resistant to what the real one is weak against. It's difficult yet enjoyable, and involves a large amount of switching your weapon type, which is a main theme of Scurge: Hive. However, this boss only has one health bar, so the player knows it's just a warm-up.
The real final boss of Scurge: Hive starts off very promising. You engage in typical pre-boss banter with the Source, who has assimilated most of the scientists. The Source reveals that it has been using Jenosa to help it get free from its containment. It has made a clone of Jenosa, which it plans to send out into the galaxy after it kills the original. Of course, Jenosa thinks differently, and you fight off against your clone.
Unfortunately, just like the game it ripped off--sorry, drew inspiration from--the final boss of Scurge: Hive is awful. The clone is protected by some sort of capsule in the middle of the room. You have to shoot two fleshly organ things on the side. When they're destroyed, the capsule comes down and the clone is revealed. The clone shoots balls of energy at you, and you need to dodge them and shoot the clone while the capsule is down. The biggest problem is that it goes against every precedent set by previous bosses. Fighting Jenosa's clone could be fun, but she just sits in the middle of the room. She only has one health bar, and she isn't weak against any element. All your shots do the same amount of damage: miniscule. It's just a bunch of frantic dodging punctuated by the quick burst of attack. Unlike the previous bosses, this one takes a long time, and playing conservatively is not an option. On one attempt, I failed because my infection meter reached 100%. Even though I could still dodge the Source's attacks, the damage over time killed me. That's another problem with Scurge: Hive, and difficult boss fights in general: unskippable cutscenes. The confrontation between Jenosa and the Source is great the first time you see it. It's not as great the tenth time.
The third part also sounds cool, but ends up feeling tacked on. Since Jenosa is infected by the Source, it tries to possess her and use her as its new host. The final boss fight takes place inside of Jenosa's mind. The background is solid white, and the Source is a blue jellyfish thing. The blue jellyfish drains your health but can't kill you, and it makes clones of you that can deal raw damage and actually can kill you. It's rather challenging, and you just finished a challenging final boss, and you start all over when you die. 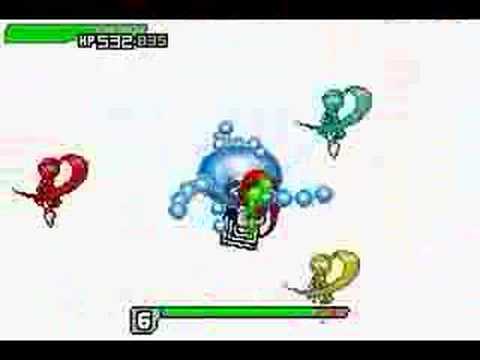 Pictured: A blue jellyfish and Jenosa clones
Another enjoyable game ruined by its final boss is Arc the Lad: Twilight of the Spirits. It's a fairly generic (yet enjoyable) PS2 SRPG. It uses circles instead of a grid system, which is kind of cool, and the main characters (Kharg the human and Darc the deimos) start off not knowing each other, but with opposing goals (Kharg wants to destroy the deimos, Darc wants to destroy the humans). Their chapters alternate, and you gather up a group of party members, each who has been affected by the other party. Kharg's party has suffered due to members of Darc's party and vice-versa. It's an interesting system, because it sets itself up well. The player can see what's going on, and you know there will be explosive results when they finally meet. Of course, in the end they join forces against the real enemy. It has pretty good music and voice acting. It's nothing special, but I enjoyed it nonetheless.
The first time I played it, my party was continuously annihilated by the final boss. I figured this was because I was underlevelled, or overused some characters to the detriment of the rest of my party. The second time I played it, I made sure to not overuse anyone, and I made sure my party members were all higher levels than my previous attempt. I was still destroyed. A trip to Gamefaqs revealed that tactics and levels didn't mean much. The only way to beat the boss's final form is by moving all your party members to either side of the screen (where his strongest attack can't hit), and to whittle away at his health with your long-range attacks.
Granted, an SRPG where you can grind generally doesn't have much strategy. After all, you can always just level grind until your characters demolish their foes However, there is always a semblance of strategy there. You make your own battle plan, choosing your characters, movement, and attacks. A final boss where there is only one viable battle plan abandons any pretense of strategy. What's more, it's really boring. Final boss fights, especially in RPGs and their variants, should be an epic confrontation. You're going all-out, using your ultimate attacks, weathering their blows, franticly healing, hoping your can kill the boss before he manages to finish off your party. I wasn't doing that; I was hiding on the sides of the room. I didn't feel like I was conquering my enemy; I felt like I was exploiting game mechanics. It was a hollow victory; I didn't feel like I deserved to win.
A bad final boss really does ruin an otherwise good game. A bad ending ruins your memories of anything good preceding it. I have no desire to replay these games either. I know that even though I'll enjoy the game, the ending won't be worth it.

I probably should write about Mass Effect 3, but I haven't played it.