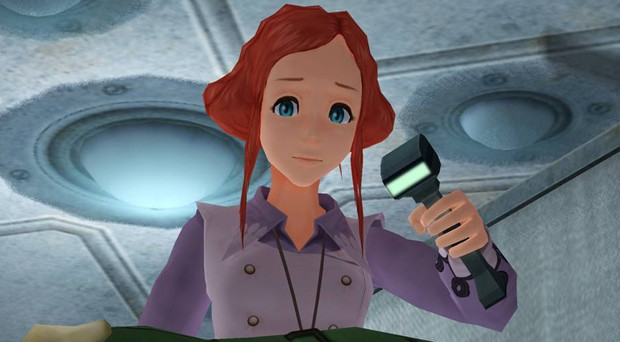 The audio can still tingle the spine, though, with haunting tracks that exacerbate the game�s unnerving events. Although some songs are reused from 999, they remain some of the most effective tracks at doing their job that I�ve ever heard. Besides the music reserved for story sequences, I found the puzzle room tunes catchy and cool, perfect for VLR�s general downtime. The biggest change, aurally, is voice acting for all supporting characters. Every character is fully voiced in the story sequences except Sigma himself, which takes some getting used to (but melds well with his occasional silent thoughts). The puzzle sequences don�t feature voice acting when characters decide to speak, but it doesn�t affect the presentation�s consistency too much. The big thing to note here is that the voice actors (at least in English) perform excellently and really carry the tone of each line, made more impressive when considering that VLR is full of dialogue paced by the player�s text-advancing speed. Zero III perfectly encapsulates what I originally imagined Final Fantasy VI�s Kefka to sound like, with a gleefully hoppy attitude that dips and rises between sentences. In case one isn't pleased with the English voices, there's the generous option to switch to Japanese instead.�

Barring a few typos (which are kind of unforgivable in a visual novel), Virtue�s Last Reward is the slicker and buffer of the two Zero Escape games currently out. The sequel is longer (I clocked 50 hours), deeper, and expands upon the concept of multiple playthroughs. But while the creators appear to have greater awareness of what they were doing with the replay system, so does the player. This transforms the life-or-death dramatic impact of 999�s endings into something more about judgment and possibilities. I ended up using the game�s handy notepad to remember crucial codes and couldn�t stop thinking about the story until one of the many room puzzles distracted me from it. Virtue�s Last Reward is a terrific and maddening sequel that challenges players both mentally and philosophically. Its setup may resemble its predecessor, but its focus is different enough to maintain a unique identity of its own. In an odd way, it provides significant ludonarrative harmony while also managing to fit a few easter eggs and inside jokes into its text.�

Virtue�s Last Reward is a riveting, tense, and introspective puzzle/adventure title that should be played by fans of the series� first entry willing to jump down the rabbit hole for a second time.

As a bonus, I've decided to share the latest video I've uploaded: a piano + ocarina cover of one of the franchise's signature tunes. Anyone who has played 999 should definitely remember this song. Thanks for reading and/or listening.
Login to vote this up!