That�s some sexy box art there, my right? Any who, what I find to be the biggest surprise that came this year was the announcement of a new Donkey Kong Country game. The game now called Tropical Freeze is being worked on by Retro Studios. I�ll be very clear that I am a huge fan of Rare�s original DKC trilogy and Retro�s work really shows that they understand what makes a good DKC game when they revived the series with Donkey Kong Country Returns. Of course I saw the game as a one shot homage to the series and thought to myself �Aw, Retro�s making a platformer with a new DKC game, how cute�.

But I�ll cut to the chase; I didn�t think there would be another DKC game to come after Returns for a long while, so when I heard Retro was making another one I got excited again, thinking they would make another respectful addition to the series. Then, it happened, Dixie Kong arrived on to the scene along with Donkey and Diddy. That really surprised me. I also noticed that they brought swimming from the original games back, it seemed like Retro was stepping their game up even more. The last big detail left with us was when Retro confirmed that David Wise, yes, David Fucking Wise was going to return as the composer for the game after so many years. Thoughts began to race in my head. The moment the first few beats of the song from the trailer began to play, I realized that Retro Studios was looking to challenge the original Rareware trilogy with Tropical Freeze. I�d give DKC Returns a fucking medal for being an excellent DKC game using only the bare essentials, but my big complaint was that I felt Retro was holding back big time. Now imagine this but with Enguarde the Swordfish back. FAN SERVICE!

So with even more elements from the old school DKC games coming back to life once again as well as the tease of the mysterious 4th playable character, my anticipation for Tropical Freeze is growing with each passing day (to the point where I can even say I�m more excited for TF than I am for MGS5, wow). It�s also safe to assume that the likes of Cranky Kong, Rambi and Squawks, are going to return. One more fact was revealed about the game, what enemy are we facing this time around? It wasn�t the Kremlings nor the Tiki�s, but rather Vikings. My initial reaction was excitement! The enemies are filled with much more personality this time around too, but then I gradually began to realize a very important aspect about the DKC games. In all 3 games, Donkey Kong had a certain nemesis that matched DK as a rival perfectly. I love Vikings and all, I think they ROOL- ya know what, fuck subtlety, WHERE THE FUCK IS KING K. ROOL!?

The person who made this awesome pic must get what I'm talking about.

Yes, the antagonist of all 3 DKC games, THAT guy. It was becoming much clearer to me. K. Rool was the PERFECT rival for Donkey Kong and one that is very entertaining and even menacing. Look, I think it�s perfectly fine for DK to have a new wave of villains for his games, it�s a great way to change things up but if it means a villain like K. Rool fading away from memory, the guy who along with DK and Diddy was the heart and soul of the DKC games, it just feels wrong. I love the Kremlings but K. Rool in particular is a timeless character. Hell Tropical Freeze is practically BEGGING for him to be in the game. I always saw K. Rool as a pirate, an invader who steals DK Bananas probably to starve the Kongs so he can be Jungle King. Why can�t we have the best of both worlds, new enemies being led by a familiar face? Whereas DK is an easier going, somewhat lazy ape who can even be brutal, King K. Rool is a cold blooded tyrant who uses cheap tactics to get what he wants; he was practically made to be DK�s arch nemesis. 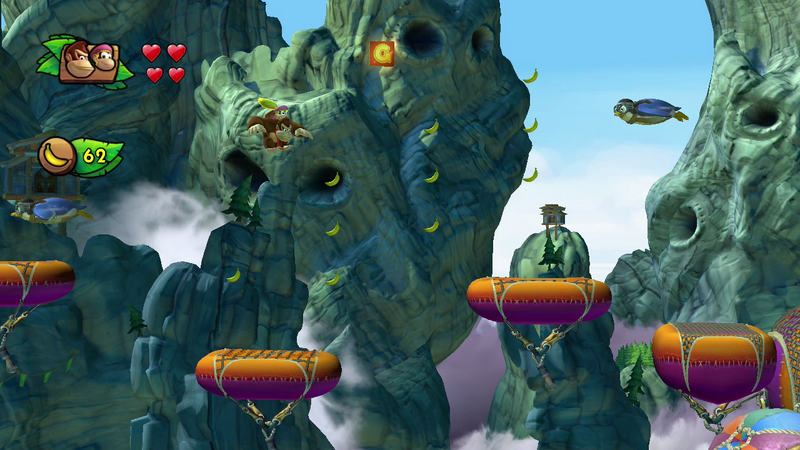 Despite my tone, I'm happy this game is getting EVERYTHING right....so far.

Retro could do wonders to his character by giving him a slight redesign, like being a nomadic dictator, somehow finding a way to lead whatever army he finds to further his goals, and if I�m going to be honest, I think K. Rool would fit in more as a Viking/leader of a group of ice pirate like animals then he is as the king of his own namesake army of Kremlings. To see K. Rool being replaced by a generic Tiki hand boss (since somehow that�s a boss type now) makes me think Nintendo clearly doesn�t care about making that ultimate new villain, so why not use what�s been in front of you all this time. I know it sounds weird of me to talk a lot about K. Rool considering I already made a blog earlier this year about how he should be in the next Smash Bros, but understand, that was at a time when I thought a new DKC game wouldn�t come in a long while. K. Rool deserves to be back in the series that made him as well as what made Donkey Kong and the rest what they are today.

I get really worked up with this kind of stuff because I don�t think this is going to be a trilogy we�re dealing with. Retro looks like they are trying to make this the big one, and what better way to end it than with the best DKC game Retro could muster up. Tropical Freeze already looks like it�s the idealized form of the big DKC game we�ve all� been waiting for; a game with DK, Diddy and Dixie, the 3 main protagonists from the original trilogy being on an epic adventure with improved gameplay.

This also brings me back to my point about the mysterious 4th character because personally, I don�t think Retro could ever disappoint me with whatever character they are thinking of. That�s just the cherry on top. Personally I hope its Kiddy Kong just to reunite the main cast. He would also make sense mechanically speaking as a character who could attach himself to Donkey Kong like the other two. Diddy can hover, Dixie is the double jump, and I think Kiddy should be you�re personal �use all you want barrel� like in DKC3. 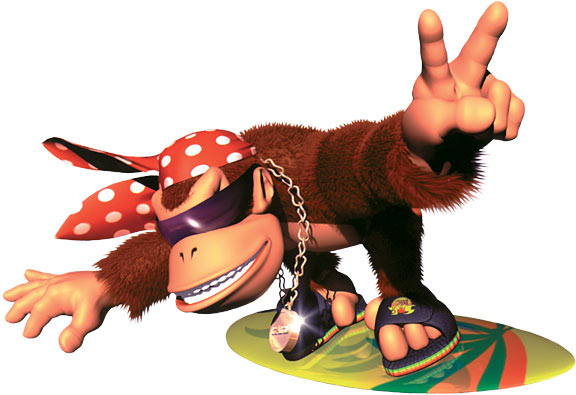 The most 90's surfer cliche was the only one who survived and made it in to Mario Kart Wii. I totally understand you Nintendo.

I also wouldn�t be opposed to Funky Kong just because I always wanted to play as him as a kid, but it also wouldn�t fit his personality about how he hates adventuring. That being said, all throughout the trailer, the levels are scattered with airplane parts. Maybe in the game you help Funky build his airplane again to take you to the next world, like Kirby�s Return to Dreamland or rather coincidently DKC3. If the 4th character is Retro�s very own Kong, that would be rather awesome as well.

And I�m burnt. I wish I could just be excited for this game normally like all the other games, but I can�t resist, Retro are truly showing their game designing muscle now, I think it has a chance to topple the Rare games, but either way I love all the DKC games for what they are. J-just don�t screw this one up Retro, please for the love of god. So, what do you all think�Oh wait, GTAV just came out? Damn my timing!
Login to vote this up!