The inner ramblings of a videogamer: Enemy obstacles and player progression. 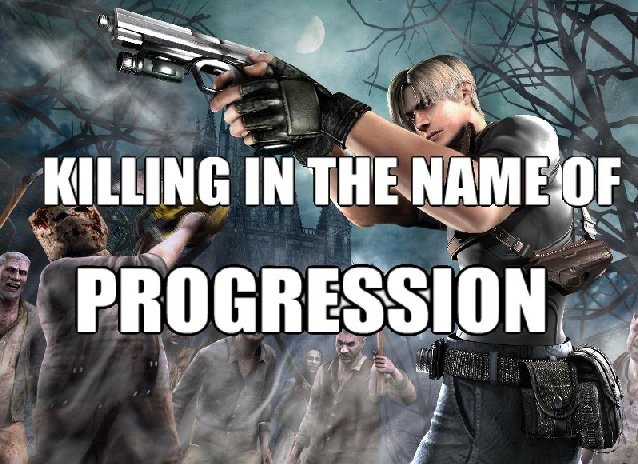 Enemy obstacles and player progression. Throughout videogame history, the player being required to kill enemies in order to make progress has been a popular and recurring gameplay mechanic, since videogames were first popularised sometime in the late 80's, and is still being used in the vast majority of modern day videogames till this day. Throughout this blog I will be referring to this gameplay mechanic as the (Killing in the name of progression gameplay mechanic) Basically, this a term I've created in order to reference a recurring gameplay mechanic that's purpose is to offer an obstacle between the player and their goal, in the form of an "enemy" or "boss" which must be killed/defeated before the player can progress.
Even though the morality of killing in videogames has been called into question quite a bit in recent years, and many games have come about lately that avoid having the player directly kill an enemy at all, I still believe it to be a very important and necessary gameplay mechanic for certain games/genres, so important in fact that many games we know and love would simply not have existed, or would have been vastly different without it.

Unfortunately I haven't been able to narrow down precisely which was the first videogame to require players to "kill" enemies in order to make progress, although I assume the practice first came about with the advent of early PC games and especially at videogame arcades, where the idea was to use enemies as a means to kill the player over and over again in order to extract as much of their pocket money as possible. If in fact this is the case, then it's likely that popular videogames such as Pacman and Space Invaders were the originators of the this gameplay mechanicwe see used so often throughout gaming history. "The stakes are never higher than when a life is on the line" after all (even if it's only a virtual life) so to allow the player to kill or be killed by enemies, made progressing more entertaining, tense and challenging. The increased difficulty after each level or enemy wave also lent to making progressing later levels extremely challenging and made getting that "high score" more rewarding.

PC games such as Wolfenstain and Doom, as well as arcade games such as Pacman and Space invaders, all used this "Killing in the name of progression gameplay mechanic" (which as I stated above is still in popular use well over 20 years after it was first implemented) this very simple but fun, addictive and challenging gameplay mechanic, kept gamers coming back for more. Those oldchool PC and arcade games that used enemies as a means to impede player progress by killing them off (in order siphon as much cash as they could from their player base at the arcades) all while offering unparalleled interactive entertainment for the time, laid the foundation for many games that would follow on the next popular platform, console gaming.

During the late 80's early 90's, the platformer (arguably the bread and butter of early console gaming) was the next popular stage to host the this perticuler gameplay mechanic. Platformer games typically required the player to progress from one side of the level to the other avoiding such hazards as pitfalls and/or enemies, with the enemies soul purpose being to impede player progress by moving back and forth, up and down or by remaining stationary. Even though the enemies at the time had very basic AI (if any at all) the level structure, their placements on the map and/or their numbers helped make up for their lack of tactical options and intelligence, creating some truly challenging platform games. The NES classic Super Mario Bro's happens to be the very first game that I played which utilised this "Killing in the name of progression gameplay mechanic" This simple platform popularised the platforming genre leading to the creation of Mario's direct competition (and rival at the time) Sonic the hedgehog (as well as many others) which unsurprisingly made use of very similar gameplay mechanics but was of course a much more fast paced game.

As I stated earlier, this gameplay mechanic can be found not only in early Arcade games, PC games and console platformers, but in just about every videogame genre. Such as the incredibly popular side scrolling beat 'em up & shoot 'em up genres, which brought us such classics as, Black Manta, Streets of rage, Contra, Parodius, R-Type, Gunstar Heroes, TMNT: Turtles in time, Guardian Heroes, Metal Slug and many, many more, they all utilised the "Killing in the name of progression gameplay mechanic" Of course the gameplay mechanic itself exists purely to create an enemy obstacle between the player and their goal, which must be defeated in order to progress. So the way in which this gameply mechanic is utilised can vary greatly from game to game and genre to genre. The Fighting game genre for example, which brought us some incredible games and franchises such as, Street fighter, Mortal Kombat, King of fighters, Samurai shodown, Tekken and Guilty Gear, amongst many others, all offered one on one fights and also utilised the "Killing in the name of progression gameply mechanic" requiring players to "KO" and sometimes Kill their opponent in order to progress to the next stage. The RPG Genre, which offered such classics as Chrono trigger, Final Fantasy, Grandia, Breath of fire and Secret of Mana, also all utilised this it, but instead placed you in a turn based battle system, sure you could choose to run from battles but chances are you'll need to fight in order gain Levels and defeat bosses. As you can see, the vast majority of retro games utilised the this gameply mechanic by creating enemy obstacles to impede player progress. Regardless of what the enemy was intended for, purely placing the enemy in the game for the player to defeat, creates an obstacle for the player to overcome in order to progress.

It wasn't until later on, as videogames began entering the mainstream and new genres and sub genres began appearing, that we started seeing the "Killing in the name of progression gameplay mechanic" undergoing a few changes. This is partly because technology had gotten to the point where videogames were capable of allowing for new mechanics to be implemented, but mostly because the pursuit for realism in gaming had created an unforeseen problem. You see as videogames become more representative of reality then arguably so too should the portrayal of killing and death, however as you are all most likely aware, the portrayal of violence in videogames has been cause for many heated debates for generations, with many in the mainstream media arguing that videogames are a contributing factor to violence in the real world. I'm not about to debate that here, but I will say that videogame violence on its own doesn't contribute to real world violence, or at least no more so than violence in movies and television.

So, instead of portraying violence realistically many games are forced to show a more "fantastical" side of violence, leading to videogame violence appearing to be over "glorified" this too led many to question whether or not killing in videogames should be removed from certain games completely. Eventually the ability to perform non lethal takedowns on enemies was introduced, this inclusion avoids the real issue of how videogame violence should be portrayed somewhat, but arguably it does enough to allow gamers to continue playing how they have been while offering another method for progressing when faced with enemy obstacles.

As it stands today, the "Killing in the name of progression gameplay mechanic" that helped popularise videogaming in the early days, is still very much in popular use. Just look at games like Assassins creed, Killzone, Devil May Cry, God of War, COD, Metal Gear Solid, Resident Evil and The Last of Us, you can see that just like the games of old, many modern videogames still use enemies as obstacles that must be defeated by the player in order to progress, the difference being now is that there are many more gameplay mechanics that allow for the player to use either non lethal takedowns, or stealth to avoid the enemy all together, at least until a boss shows up.

Personally, I find it very interesting to see how a gameplay mechanic, such as the "Killing in the name of progression gameplay mechanic" that has been in use since gaming first became popular, is still very much in popular use today. Even though the industry has been through a great many changes and offered us a myriad of additional gameplay mechanics and tactical choices, how enemies are used as obstacles for the player to overcome in order to progress, is still as popular a gameplay mechanic as ever. It really just goes to show that with all the progress videogames have made over the years, that the basic foundation for fun, engaging and most importantly, entertaining gameplay, is still present.

Thanks for reading my blog and as always if you want to add anything or disagree with any of the points I've made, please feel free to leave a comment.
Login to vote this up!