7:16 AM on 09.13.2013 (server time)    0
So I've been working my way through my backlog, and lamenting how long it's been since my most recent post, when I was struck by a burst of inspiration. I realized I could blog about various games as I went through them, starting with Okami (Wii version). Be forewarned, there are spoilers here.

Okami is one of those games that everyone has heard of, and that everyone knows is a good game, but no one has actually played. It's a real shame, too, because it really is amazing. Okami can be accurately described as "Zelda in mythical Japan" but it's really so much more than that. Granted, Okami does play like a Zelda game, and it draws several obvious comparisons, but Okami isn't simply Zelda with a new coat of paint. It not only matches Zelda titles, but even surpasses them in several areas.
You play as Amaterasu, a wolf who is also the Sun Goddess. Prior to the events of Okami, Kamiki Village was terrorized by the demonic serpent Orochi. Each year, Orochi would demand the Kamiki Village feed him a maiden of his choosing. On the night of his hundredth sacrifice, the hero Nagi defeated Orochi and sealed Orochi's remains with his sword. 100 years have since passed, and someone has removed Nagi's sword, freeing Orochi, and starting the events of Okami.

The main characters in Okami are Amaterasu, who the player controls, and Issun, her sidekick. This draws more comparisons to Zelda. Amaterasu is the silent protagonist, and Issun is the framing device who rides her around. However, it's better done than Navi, Tat'l, Tetra's pendent, Ezlo, Midna, and any others I'm forgetting. Amaterasu is actually an effective silent protagonist. Unlike Link, it makes sense for Amaterasu to not talk. She is, after all, a wolf. She is a magical, intelligent wolf, capable of understanding human speech, and she can convey her reaction by nodding or shaking her head or falling asleep mid-conversation, but she is still physically incapable of speech. That's what Issun is for.
Issun is also better than any Zelda framing device, because he is a real character. Ezlo and Midna had some input in the storyline, but Navi was just there. Issun is a full-fleshed character. He has a background, hopes, dreams, and hilarious dialogue. Since Amaterasu can't talk, Issun does all the interactions. You don't really feel that you're controlling a bland, silent protagonist, because Issun talks back. Like the sidekick characters in Zelda, he rides around on your character, and tells you your objectives. You don't feel like you control just Amaterasu; you feel like you control Amaterasu and Issun. Like Zelda sidekicks, he tells you where to go next. Unlike Zelda sidekicks, he engages in conversation, has an actual character, and is awesome.
God, Navi sucks so much.
The most obvious thing about Okami is that it's simply oozing with style. It's a beautiful game, as you can plainly see. 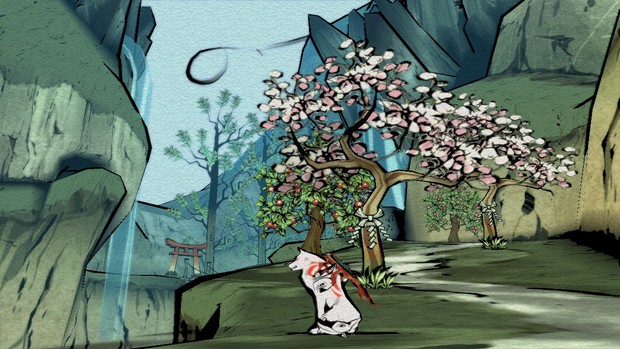 The watercolor inspired art style is a marvel to behold; not even Wind Waker looked this stylish. It adds a different, otherworldly feel to the environment. The world itself is beautiful, and the people and monsters all feel unique. When making Wind Waker, Miyamoto wanted to make the player feel like they were playing a cartoon. With Okami, the player feels like they're playing a painting.
I've always enjoyed boss fights, and Okami does not fail to deliver on this front. The bosses in Okami are great. Most of them are quite different from each other, although there are a few rehashes. Orochi is incredibly fun; he's a giant snake dragon with eight heads with a garden and bell on his back. Each head has a different weakness, and you fight him by attacking his heads, then when they're down, jumping on his back and attacking his bell. The final boss is kind of strange, a little disappointing, but still pretty fun. 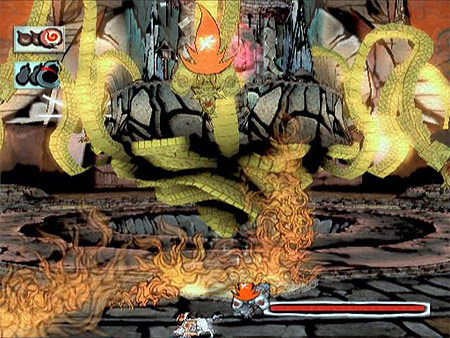 Of course, I would be remiss in writing about Okami without mentioning the Celestial Brush. You cast spells in Okami by painting them. You hold down B to bring up the painting screen, which puts a sepia tone over everything, then you hold down A to paint. Different shapes cast different spells. A straight line is a quick slash, which will be your most commonly used spell, as it cuts through objects, damages enemies, and opens chests. Other spells include drawing a circle on water to make a lily pad, or a swirl to create a gust of wind. This is probably my favorite magic system in any game; the player isn't just selecting spells from a menu, they're actually casting them. It also fits the theme of Okami wonderfully; everything looks like a painting, and the player themselves paints to use magic.
The Wiimote generally works as a paintbrush, although it can be finicky at times; there were several times when I failed to cast a spell because my painting wasn't precise enough. I hear the PS2 version, where you use an analog stick to control the brush, is more forgiving. The Wiimote causes a few other problems by nature of being a Wiimote; they just arent very precise. Attacking is done by swinging the Wiimote, which is normally tolerable. However, there are some times when you need to attack at just the right time; one of the weapon types is based on combos and timing, and waggling just doesnt feel right.
I highly recommend Okami. It's a joy to play, and that's not a term I use frequently. You know how everyone always talks about how great Okami is? It turns out there's a reason for that. 10/10.
Login to vote this up!