Journey review - It's worth it

5:48 PM on 09.10.2013 (server time)    0
During the PSN sale that went down during the PAX week (or around then) I had the pleasure of picking up Journey, made by the same people behind flOw and Flower. While I've only played flOw before (spending about 30 minutes on it), I'm willing to bet Journey is thatgamecompany's most ambitious and fullest project yet. Journey came out last year and received much attention for its aesthetics and "emotional investment". It was an indie title that won many GOTY awards and top honors throughout 2012. An "art" game, if one would want to use a pretentious term. 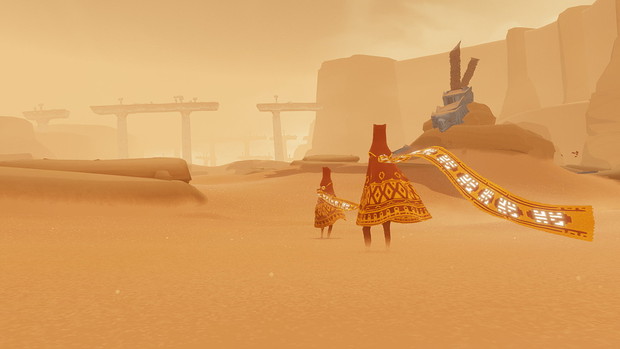 Quiet and peaceful isn't absolute in Journey however, as the levels do make time to mix up the highs and lows players experience. Journey is surprisingly engaging and diverse for the minimalist style it appears to exude. While I won't spoil it for those who haven't played the game, be assured that there are other familiar game pleasures at work besides the usual run-and-jump aspects. What I love about this game is its delight in showing players the joy of "drifting" and interacting with the game world, and it does so in a pure sense that few titles demonstrate. Traversing a wide, almost barren landscape toward a mysterious destination would bring me back to the days of riding around in Shadow of the Colossus or certain Zelda entries.�

I'd say Journey is quite worth the price listed on PSN, especially in the event that it's on sale. The game is accessible to anyone, from young children with plenty of time on their hands to casual or older adults with little time on their hands. Pick it up, play it, and let friends/family give it a try. Even if it doesn't emanate the same level of emotional punch for some players that more centrally story-focused games do, it will certainly remain one of the most unique gems in the medium.
Login to vote this up!