Let's Go Fishing! - A Silly Blog About Fishing in Games

4:21 PM on 09.08.2013 (server time)    0
Fishing is bloody boring. In real life, I mean. I've tried it a couple of times, I even caught a starfish on a school trip which was pretty cool, but it's not for me. Mainly because I'd have to go outdoors. It's also dangerous; I tried fishing in the pond we used to have in our garden (using a reed from said pond, and no bait...I was about 5 or something), but I fell in and nearly drowned, probably, which proves it is a deadly sport.

But in video games?

Do I want to take a break from fighting monsters and saving Hyrule to go angling at Lake Hylia? Yes, I will save my Rupees for it! There's an empty museum in this town full of animals that I've just moved to, want to go snag some of the aqua-life and fill it up? Heck yes, that fishing rod at Nook's Cranny will be my first purchase! I own a farm in a tiny coastal village, there's not a lot to do after farm chores. Oh, there's a river? Fishing!


Fishing is so much fun. In video games, that is. I was "hooked" on digital fishing since Pokémon Blue, which was a very simple process of casting a line and seeing if anything bit. The exciting part was battling whatever I managed to get, and doing the Pokémon thing with the balls. I would also spend hours at the fishing pond in Ocarina of Time, despite the looming chaos and turmoil threatening Hyrule. 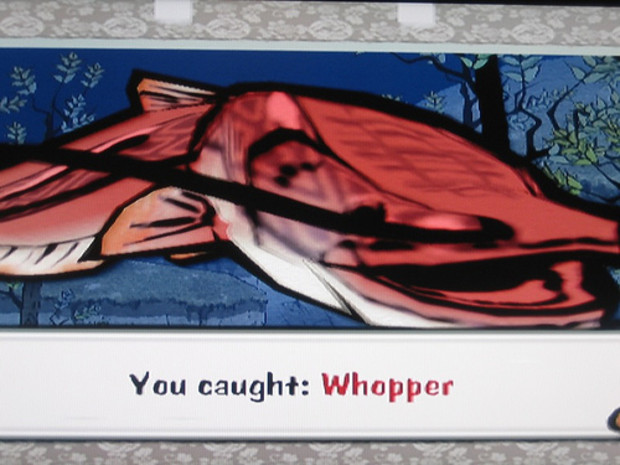 I'm kind of disappointed that I've played nothing recently that has a fishing feature. I know that kind of activity won't suit all types of games, but there are several which I think could (should) have included it.

It's one major thing missing from SWTOR; fishing was one of my favourite pastimes in WoW, but fish don't seem to exist in the SWTOR galaxy. I was miffed that Skyward Sword had no fishing mini-game. I've also been playing Fallout New Vegas, and was thinking, wouldn't it be great if you could catch Mini-Mirelurks or other mutated aquatic beasts from irradiated lakes? Something I hope they consider for Fallout 4.

In conclusion, I'd like more fishing in video games, please.
Login to vote this up!