4:37 PM on 09.06.2013 (server time)    0
Another year, and another PAX has passed by. I played games, met with people and thankfully I'm not recovering from some nasty post-convention flu. (I am sleeping a lot more, though.)

Alas, there wasn't any big outside-of-PAX events that I was aware of, nothing as awesome as last year's Final Fantasy 25th Anniversary expo thing that Square-Enix did with playable copies of FF2 and 3 on the original Famicom. (you can see that blog entry I made of it last year here.) What I did notice around the Seattle area was a flood of gaming-related entities. From seeing ads for games, to seeing retail stores show their slight understanding of video game culture. So I took a few pictures of them while I was around Seattle. 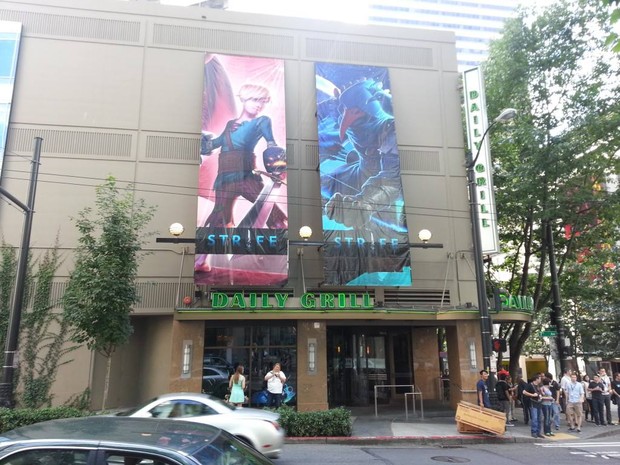 Even by the Convention Center, video games were all over the place. The Daily Grill, the restaurant next door to the convention, had banners and ads for the MOBA game Strife. PAX 2013 seemed to be the "year of the MOBA," as there were about a dozen different kinds of MOBAs being shown off. �Chasing the gravy train, as always...

I also saw Total War: Rome II and Project Diva F: Hatsune Miku ads on taxis and buses, but did not get adequate pictures of either. In fact, I probably missed a few other games-related things, but this is what I saw while I was out and about.

I like PAX, it's a cool convention. It's too bad it's being partially ran by a guy who has constant foot-in-mouth syndrome. Hopefully we'll start seeing other conventions show up in response, I want to make sure my money's going towards someone who's not a complete dick.
#General-Opinion/Editorial
Login to vote this up!