Objection! In Defense of the Gigolo 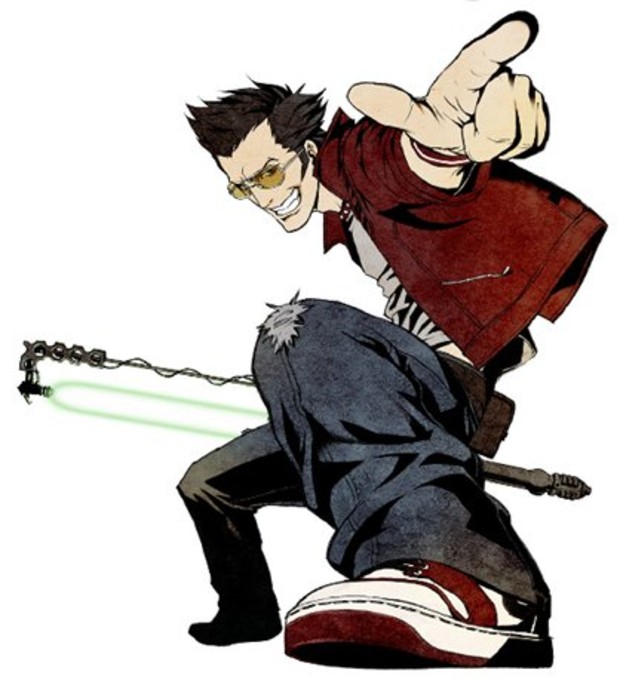 
When Shadows of the Damned came out, I wrote a piece defending some of the design and characterization choices made by Goichi Suda and the team at Grasshopper Manufacture that were being criticized elsewhere on the internet. Suda 51 is one of a handful of developers I see more as an artist than anything else. Even when he’s not directing (Shadows of the Damned, Killer is Dead) or writing (Lollipop Chainsaw), his artistic vision pervades every corner of Grasshopper Manufacture. It’s the priority. Not gameplay. Not graphics. Not story. It’s that intangible charm and creativity of a man saying, “If god is an old man in a wheelchair with a sniper rifle and the devil is the leader of terrorist organization comprised of invisible, cackling, exploding freaks, what happens when they play chess?”

I’m about half way through Killer Is Dead. The response on the internet has been somewhat mixed. It seems that most reviewers agree on its competency as an action game, but have been turned off by the vapid and (brace yourselves) sexist Gigolo Missions. The dreaded s-word, usually followed by some mention of feminism and someone complaining that games like this ruin the medium’s growing acceptance as a mature art form. It seems the gaming community is having this discussion every other week. Even though I haven’t finished the game yet, I wanted to comment on the Killer Is Dead matter while it’s still fresh.

If there’s one thing I’ve learned over the years, it’s that Suda51 games are never what they seem. Killer 7 is a socio-political mindfuck once you start parsing out the surreal madness. Flower, Sun and Rain is an experiment in breaking down a game to its base elements (and a sadistic experiment on its players). No More Heroes is an exploration of the otaku and video game sub-cultures and at times a metaphor for the video game industry itself. Shadows of the Damned is the ultimate expression of machismo and Lollipop Chainsaw flips gender norms on its head.

Because of this, I found myself approaching Killer Is Dead with a critical eye from the get-go, something I don’t think I’ve ever done before with a video game. If Mondo Zappa is supposed to be inspired by James Bond, then the Mondo Girls must assuredly be representative of Bond Girls. And yet, while the collective internet appears turned off by the notion of Gigolo missions, popular culture celebrates James Bond’s ability to effortlessly seduce any woman he desires in a matter of seconds. To be cast as a Bond Girl is an honor, a coveted role in the ongoing history of film. James Bond is an archetype unto himself. Man of mystery – suave but dangerous, romantic, confident, killing machine.

Mondo is all of these things, but compared to Bond, he has to work to get the girl. When’s the last time you saw Bond treat his girls to some perfume or bubble gum? Or necklaces made from lunar rock! Mondo has to lavish his ladies with hundreds of thousands of dollars worth of gifts before he can even hope to get any action. But it’s not just the money. Mondo is never aggressive or vulgar, he’s actually quite the gentleman. In fact, he’s kind of nervous. The only way you can build the “guts” to present a present is by sneaking in a few body shots when the lady isn’t looking, which, let’s be honest folks, every man in the history of the world is guilty of. One of our base human instincts is physical attraction. It’s nothing to be ashamed of, and certainly nothing to be offended by. I mean, you’re checking out pixels. But I’m getting off topic. The point is, the Mondo Girls have all the power in this relationship. They call Mondo, not the other way around. They are the keepers of Mondo’s ultimate power. You want a fancy drill arm? Take Natalia out for drinks. Freeze cannon? Have a moonlit conversation with Koharu. It's unfortunate that these sections have been hit with the sexist hammer, because I find it be quite the opposite.

James Bond being a creep


Reviewers have also commented on the strange pacing and structure of the story, and even I must admit that the dialogue is oddly stilted at times. But it also feels so purposeful, like every other Grasshopper production. I’m not an expert on the subject, but the moody cinematography and shadowy visuals convey a noir-like feeling. So far, Killer Is Dead seems to be an amalgam of James Bond and film noir – Suda 51 style. That’s fine by me, and I’m looking forward to uncovering what else the game might be hiding under its surface.
#General-Opinion/Editorial
Login to vote this up!