This morning marked the lowest point in my gaming life.

2:08 PM on 08.21.2013 (server time)    0
Last week i was at the game store and noticed they were selling pre-owned PS3 games under a 'buy 2 get 1 free' promotion, so i snapped up inFAMOUS 2, Uncharted 3 and GoldenEye: Reloaded. which i thought i could finish the last little bit of this morning before heading out.

I'm sure most of you are familiar with the GoldenEye story. The difference in the update is that Alec Trevelyan is motivated by a hatred of the bankers instead of his parents being Lienz cossacks and some of the locations are different. Instead of taking place in Cuba the finale is set at a clean energy facility in Nigeria, which is where i was at.

During the 'cradle' level there is a part where you need to traverse a series of collapsing catwalks, all while infinitely-spawning enemies shoot at you from all sides. Cover is limited and your health doesn't regenerate while sprinting... and you only have 90 seconds to reach the end. There is not method; you just need to get lucky.

I wasn't getting lucky. Ten times i tried and ten times i failed, and what's more is that i was totally ignoring the bowl of Frosties i had prepared as my breakfast. They were going soggy and it was all 006's fault. The bastard traitor. Why couldn't he just join Occupy Wall Street or something?

By the 15th attempt i was out of my seat. Partially because i was too annoyed to sit, but also the red light on the controller was flashing, signalling that it needed a charge. So i plugged it in, and as the charger cable is short i couldn't sit even if i wasn't so agitated.

I had no been trying this for about half an hour, and hadn't very long until i absolutely, positively needed to be out the front door, and after a few more failed attempts i'd had enough. I softly threw the controller backwards, so it would land on the sofa.�

Only it didn't land on the sofa. It was still plugged into the charger cable which tethered it to the console. Instead of gliding gracefully to the padded safety of my remarkably chic sofa, the wire caused it to snap back, and it took a nose dive right into the barely-eaten bowl of cereal. Milk went everywhere. You play 007 games to feel like James Bond... but i ended up feeling lit Steve Carell in Get Smart, which is only marginally better than feeling like Johnny English. 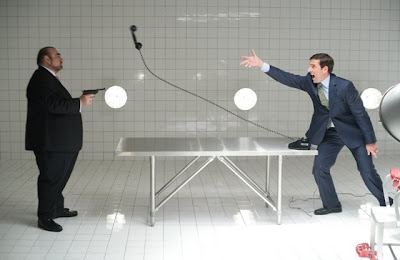