Gamecube, Wii and PS2 Emulation: it's easy, and so very worth it

2:00 PM on 08.13.2013 (server time)    0
While many gamers are anticipating the coming next generation of games, I have been, ironically, looking more and more to the previous generation, thanks to the joys of emulation. Among the super hot AAA games I've played this year are such new releases as Luigi's Mansion (the first one), Ar Tonelico and Shadow Hearts (SH in particular is a great RPG series, one that deserves a blog of its own).

I first decided to try my hand at emulation when I brought my PS2 with me last time I visited home so I could enjoy some old school RPG goodness, only to find that, for some reason, the component cable doesn't work (I get sound but not image), and the games look absolutely hideous using the standard cable, enough to turn me off them completely. Then I remembered "hey, wasn't there a PS2 emulation project"? By this time it should probably be working well, so I checked it out.

Boy did I like what I found! I thought PC emulation was something complicated that took lots of work to, well, get it to work, but it's nothing of the sort. I found PS2 emulation very simple, and it worked very well. Then I decided to try Gamecube emulation, and my experience was just as good. Even if you own a PS2 or a Gamecube/Wii, you might want to consider emulation, because it renders many games in HD, with AA and other effects. So I thought I'd put together a quick guide for those Dtoiders interested in trying it out.

Even though we're talking about decade-old games, you still need a decent PC to run them. By that I don't mean a super rig, but it can't be a netbook either. As long as you have an ok video card and an ok CPU, it should be enough. Naturally, different games can be more or less demanding on the hardware.

The name of the PS2 emulator is PCSX2, and you can get it here. In this page you can find the download, guide, and pretty much almost everything you need. Even if you're not tech savvy (which I'm not), you can get the emulator up and running in 10-15 minutes.  You can play the games directly from the DVD, or create a ISO image from the disc with imgburn.

Note that I said you could get ALMOST everything you need from that page. That's because you also need the PS2 bios, and that's a Sony copyright, so they can't link to it. There's a tool to extract the bios from the PS2 and transfer it to the PC, but it sounds rather complicated. Even if you do own a PS2, I suggest you simply type a few keywords on Google and download it from the world wide web. Then you simply unzip the files in the designated folder. Again, the whole process won't take more than a few minutes.

Quick tip: one of the things you'll find when configuring PCSX2 that's not well explained is that you can run the games in "hardware mode" and "software mode". Basically, the difference is that you can only do nice things like increase the resolution in hardware mode. Software mode uses the CPU to render the picture, and only the native PS2 resolution is available. You'll generally want to use hardware mode whenever possible, but if the game has graphical glitches or bugs, software mode usually solves them.

The Gamecube and the Wii emulator are one and the same, and this time there's no need for any bios stuff. Just go here, download and install Dolphin, follow the steps shown in the five-minute beginner's guide, and if you don't need to set up the Wiimote (if you're only playing Gamecube games, for instance), that's all you have to do. It's actually simpler and faster than setting up the PS2 emulator. If you want to use the Wiimote, it will take a bit longer, and you will also need a sensor bar and possibly a bluetooth dongle. One of the cool things about Dolphin is that you can map motions to the keyboard or controller, making some games actually easier to play, such as Donkey Kong Country Returns.

Getting the games to run

Unlike the PS2, Windows generally doesn't read GC/Wii discs (at least mine doesn't). If you're a horrible, horrible, horrible pirate who doesn't mind depriving long-dead publishers and developers of the revenue they are entitled from their long-lost games, that's not a problem, you will simply download the image from you know where and run it straight from your PC. You naughty boy/girl/transgender/whatever the hell you identify as, you!

If you have the physical copy of the game (and if you intend to play Wii games that are still in print, you really should!), Kotaku has this handy guide. It's a simple process, and it will take you about 15 minutes to complete.

I've been playing Shadow Hearts 2, and since I'm such a nice guy, I took some pictures to show you guys just how dramatic the difference can be. 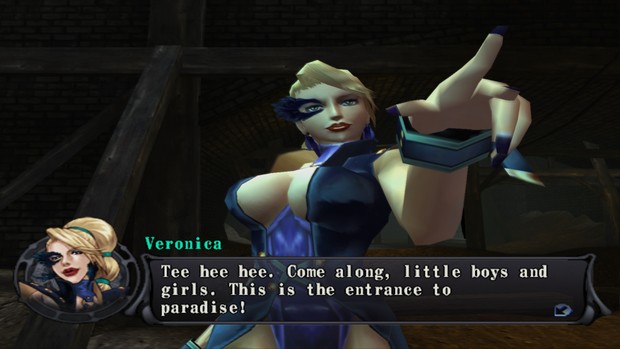 
I rest my case.
Login to vote this up!