I don't know who introduced me to it, maybe it was somebody at Giant Bomb, maybe it was a friend, but I've been messing around Salty Bet, which is arguably the most dumbest, and yet, most amazing thing I've seen in a while.

Salty Bet is a gambling-style game where you place bets with "Salty Bucks" (not real money, just fake digital cash) on who's gonna win in a fighting tournament. Usually it's CPU-ran MUGEN fights, but I've also heard you could've also bet on EVO tournaments when that was live.

This is an example of one match: 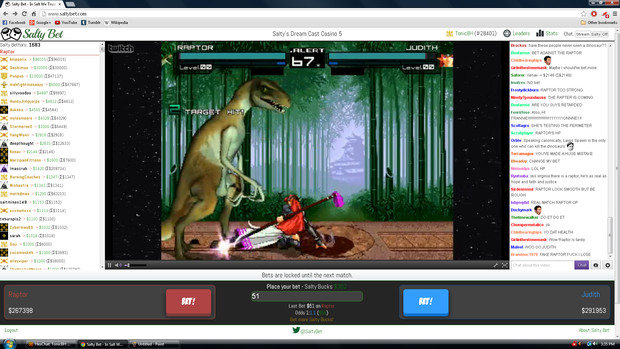 Now, I'm no fighting game aficionado -- try playing me at Injustice or Mortal Kombat 2011 sometime, you'll whip my ass -- but I love how dumb this whole thing is even without having much fighting game knowledge. The chat is rife with people voting for their "WAIFU"s (female characters) and saying "ALWAYS/NEVER BET ON DBZ" (even if it's "Gotenks GT" or something), and it's easy to get into the fever of it all, sometimes going all in on a character, only to find out the odds are stacked heavily against the character you bet on.

This is the reason why I haven't done anything productive lately. Hell, I got this Hockey game soundtrack CD I found at a Value Village last week that I'm supposed to write about, but instead I hop back on Salty Bet and waste hours betting on matches and slowly building my salty cash flow. It's that addictive.

Honestly, I wrote this because it gives me motivation to write more stuff. It also forces me to take a break on that damn site and actually do something for a change.
Login to vote this up!