3 StreetPass Games that Need to be Made 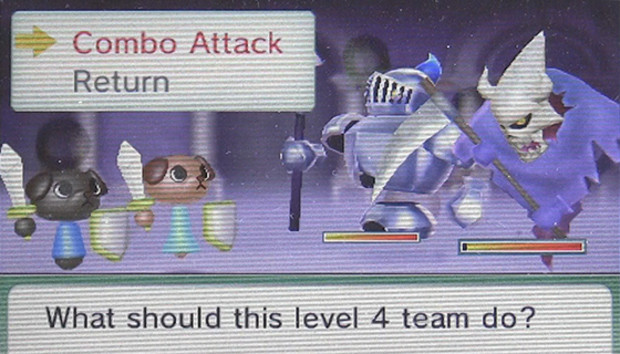 
The additional party members can execute certain combo attacks and magic spells like in Find Mii II, but the main character is unable to be a part of combo attacks. Also, level-ups apply to the party and not specific characters, so choosing to swap out a party member would allow the new party member to immediately level up to the appropriate spot.

Each dungeon is a set number of floors, but individual floors can only be unlocked by StreetPass tags. The monsters, hazards, and loot on each floor are determined by the shirt color of the StreetPassed Mii. If the party completes all unlocked floors without reaching the end of the dungeon, the player can either set up camp until another StreetPass tag is made, or they can choose to return to town and reshuffle the dungeon with subsequent tags.

If a StreetPass tag is made with a Mii who happens to be in the active party, the player has the choice to change the Mii’s class if the newly tagged Mii happens to be wearing a different color shirt. Also, if the newly tagged Mii knows a spell that the in-party version of the Mii doesn’t know, then the Mii can choose to learn one of those spells in addition to spells (s)he has naturally learned. Going through this process again with the same Mii will make the in-party Mii forget whatever spell (s)he had learned before. This would add a slight cooperative element to the game, as friends could coordinate unique party setups and build each other’s main characters accordingly.

Again, these are just my dream StreetPass games that I believe could offer interesting innovations to their respective genres. Casual games don’t need to be the share-spam extravaganzas that Farmville spawned in its popularity. The growing popularity of the 3DS and the Streetpass games are perfect launchpads in which casual games could be reinvented, and getting casual gamers interested in new genres has the potential to grow interest in deeper games and shove a knife in the heart of anyone who thinks triple A games need to adapt the money gouging practices of freenium games.

I’m interested in what others would think of StreetPass games like the ones I listed above, and I’ll certainly read any comments with other potentially awesome ideas for StreetPass games. And if anyone at Nintendo is reading this, I’m not asking for a job or anything, but if a hefty bag of cash magically appeared at my door then I might look the other way if you steal my clearly genius ideas. Wink wink nudge nudge... please?
#General-Opinion/Editorial
Login to vote this up!