10:02 PM on 07.26.2013 (server time)    0
I was recently trying to think of what I could have as my choice in weapon for the DToid FNF super mega ulta fight image, and was thinking through every game that has been special to me, and uniquely special to me.  Sure, I like Dark Souls, I am a fan of Earthbound, Mario, Sonic, and pretty much the majority of iconic weapons.  The Master Sword crossed my mind, but I thought of one that made me laugh a bit:  Bubble Bobble.  Encasing his foes in a bubble, then popping them into an ice cream cone.  Then I reflected just how personal that game was to me.  It has been with me for my entire life, without hyperbole.  So I figured I would share the magical journey of Bub, Bob, and taterchimp with you all. 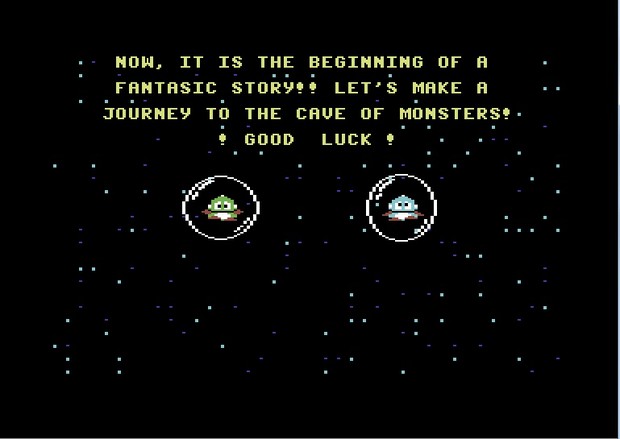 So this story begins, like many people’s stories, with me being born.  I was born in 1988, which was also the year that my parents first picked up their super special awesome Nintendo Entertainment System.  There are so many stories that I have only heard in passing, but couldn’t have possibly remembered.  My dad, as I recall, was the first to beat Super Mario Bros in the family, but my mom was able to make it through Super Mario 2.  Everyone tried to figure out just exactly what to do about Mr ‘grumble grumble’ back in the NES Zelda days.  Basically, the entire family was fixated on the video games from as soon as we were born.

The best example of this?  My brother, who is 4 years older than I am, actually picked up reading through video games.  In fact, his first word was from the background of one of the levels (although, much to my regret, I do not remember if it was the “Jump!” screen or “Popcorn” screen, but I want to say Jump).

Now, it is a strange case with this game over so many others.  I remember first seeing Final Fantasy 3, I remember first learning about Super Mario World, and I seem to recall picking up Amagon and Battletoads, but Bubble Bobble was just ingrained in my knowledge pool.  I never remember learning to play the game, I only remember playing it.  Often times, I would come home from school and my brother and I would fire up a round of it and play through as far as we cared to get before dinner would be finished, or before it was time for bed.  I remember on weekends, I would sit in front of the TV with my mom and play the game, and she would always carry us through the levels.

One of the sillier memories I had of the game is from one of the specific in game powerups:  the shoes.  Other power ups made it so you had faster bubbles, or filled the screen with water, or paused the enemies, useful abilities.  The shoes increased your move speed to a point where picking them up was almost suicidal.  As a child, I always called them Mentos Shoes.  Much like Mentos breathes you full of life, the Mentos shoes were full of death.  I remember singing that exact line nearly every single time anyone would pick up a pair.  There were also the evil toasters, the death whale, and of course the burning popcorn.

Now, this was back in the Nintendo era, so the game was naturally incredibly difficult, but online some other games you could always pick up at the level you left off (with your score reset to 0 naturally), so often you would get stuck on a single level, trying to bubble jump up the side of the screen to reach enemies up top who would rain death on you from on high, or simply bide their time until the death whale showed up.  In theory, however, you could beat the game by yourself.  The very last level can be completed solo - but you don’t actually win. You have to pick up an item that shows up for what feels like a second or two to get to the secret levels.  Failure to collect this will result in you going to a fake boss giving you the ‘bad’ ending.

So after much coordination, usually involving the ‘worse’ player camping the item spwan, we would go into the bonus levels that were a whole new magnitude of difficulty.  After clearing those, you finally reach the last boss of the game.  In an ultimate test of relationships with your family members, the game forces you to not only get to the secret door, not just get to the boss, but both players have to survive the entire boss fight with their limited lives.  This often met with heartache as one player wouldn’t be able to lock down the pattern, or would be blocked into a corner, unable to do anything except become resigned to their grim fate.  But we always would make it there, and we would always take him out.  Naturally, there was a difficulty increased palette swap mode, but we never bothered.

would be interested to know how many times I cleared the game, how many hours I spent with friends and family playing through this simple arcade game, but unfortunately that information is lost to time.  In what I consider to be understandable, yet unfortunate, my parent’s interest in videogames declined over the years.  The last console that they really were into was the SNES, only occasionally playing Star Fox on the N64.  (Also, I remember my dad playing Star Fox on the SNES, getting the warps, singing Frank Zappa, and telling me he was in the Space Armadillo...it was good times).  For about a decade, it was just my brother and me playing games, which is probably important later in this story, so please try to remember it.

It is rather amusing that the story didn’t end with the SNES, or even as recently as the Wii.  Strange things happen to you in college, and many of those things go back to simpler times.  I am a firm believer that college students are the same as 5 year olds, but now with the means to enact their desires.  A boy who wants to wear a dress?  Go for it.  Eat nothing but pringles and cookie dough?  Sounds great.  Don’t want to go to school, just want to sleep.  No one is stopping you!  This, for me, was all of those in addition to just wanting to play retro games that reminded me of the folks back home.  I know it was no speed run, but I did beat A Link To the Past in a single sitting (4.5 hours long) one day, just to prove I could.  I only died at the very end to Ganon himself, suffering a mild heart attack before realizing I had a fairy on hand.  It was my sophomore year that I remembered about Bubble Bobble, finding it both on Xbox Live Arcade, but more importantly for my nostalgia, on the Wii Virtual Console.

Clearly, I had to share this experience with someone, but who would suffice?  The answer was my girlfriend at the game - a girl who was by no means a gamer, but had a competitive spirit, and a desire to spend time together with common activities.  While I was spending a night with her folks, we started up some Bubble Bobble, and it soon grew into an obsession to beat the game, just like with my family in year past.  We now had the means to stay up until midnight trying to pass single levels, only to realize that we were too beat to accomplish it.  We didn’t manage to make it to the end before we continued our travels another three hours to spend some time with my folks.  After we said our introductions, we hunkered down in front of a screen yet again, and began to continue right from the password we had scribbled in our notebooks.

It was here that an incredibly strange experience happened.  As my girlfriend and I played the game together, my mom came over to chat and watch us play.  As items popped up on the screen, she would yell at us to get them, able to list off what every single item did.  I was completely bewildered.  After a decade, I had completely forgotten what some of the objects did, but she was able to call out every single one.  We had talked about it later, and she told us that she didn’t know that she knew, but seeing it all in action made it all come back.  It was a mix of hilarious, and touchingly nostalgic to go back to those days where I used to have the flu, would miss school, and just sit down in front of the 12 inch CRT TV, NES controller in hand, and play Bubble Bobble with my mom.

Finally, just to take a moment, I don’t think anyone who has played the game doesn’t know the soundtrack by heart.  As I recall, the game only has about 3 songs that play, and the main one is probably the happiest music in the world to me.  If ever I get alzheimers, I swear I will still remember the track.  If the world starts going wrong, if friends leave, and times get tough, just hearing that upbeat series of beeps and boops reminds me of childhood, family, friends, and just...being a kid.  Having fun.  Spending time with people important to me by controlling a dinosaur shooting spit at a walking toaster to turn him into a popsicle.  A simpler time.

I’m sure every gamer probably has a game like Bubble Bobble for them, some game that they cherish more than any other.  The strange thing is, as time goes on, there will be children who look this way on games that are out today.  Some kid who played Viva Pinata with their dad and will think fondly back on the the vibrant pinatas.  A child who remembers the good old days of playing Rayman Origins with mom, and, yes, Call of Duty with friends.  It is really amazing how these games can not only provide entertainment, but also provide such fond memories, build up relationships, and define who you are as a person.  I guess, with that, what about you, Destructoid?  Was game is your Bubble Bobble?
Login to vote this up!