Hey guys!  A few weeks back I posted about my experience with getting into DOTA 2 after a week and a half.  Well, as of today I am about 32 hours in the game.   The overall impression of the game was positive, and I made a few key statements that were agreeable, but I also made a few statements that were less than agreeable, according to the community.  I have been watching a bunch of Purge’s gameplay videos for different heroes, Inviationals, and Alienware cups, and it really seems like each player, at the very least, fills a role.

So recently, I decided to switch up my hero rotation and tried out Vengeful Spirit, who I liked a great deal, and then Centaur Warrunner, who I currently really love.  I started playing him after reading up about him on the DOTA wiki, and it seems like he has a decent stun, two interesting abilities, and a toolkit of an ultimate. I played with my friend from the last blog some more, but this time on Hard difficulty, and hoo boy, that difficulty is intense.  With heroes like Pudge and VS who rely on singling out someone, the computer gets to a point where they travel together all the time, and can teleport in right when it would suck the most.  They can stack stuns in a criminally efficient way, and I was not pulling my weight, but I was learning.  Specifically I learned a pro tip about denying:  It's annoying as hell. 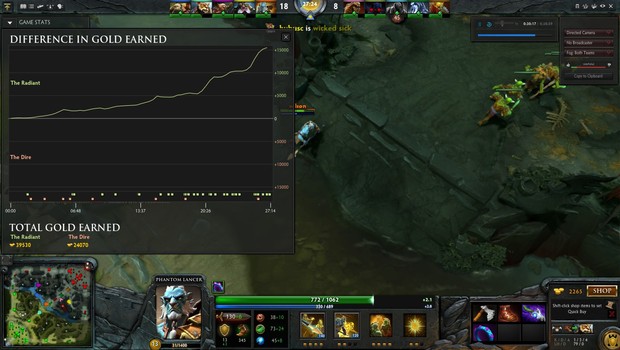 Line graphs?  What am I playing, EVE?

My support Pudge was a total bro, and landed some incredibly sexy hooks.  There were a few times where he was outclassed, but I was able to clean up.  One encounter he got away with naught but a single health.  Finally, one of our teammates was Brewmaster, and that just seemed like grade A smurfing - he had some good micro, and was doing incredibly well, and fulfilled he carry role quite well.  I was also super amused at myself in the late game, as the enemies had a Nightstalker.  At one point, he was chasing me out of their base, and I was running because I was at half life - 1400/3300 total, and he was at full health....1100....I probably could have taken him.  But I suppose my ultra conservative play style is better than feeding the enemy teams.

So overall?  This game is fun as dicks.  After 30 hours of bot fights, playing against humans is a piece of cake.  A lot of the players don’t know the basics of pushing, last hits, denies, and all that, so I am able to have a really good time.  After I level up a bit I’m sure I will look back at these days with a certain fondness, and my opponents will only get better from here.  This may just have to do with events transpiring in my personal life (unironically, my life is actually getting awesome, which is pretty great), but this game has been a ton of fun.  I feel like I have the technical aspects down.

So where can I grow from here?  I watched my matches, and the first match I died in a very sloppy manner several times.  I need to work on that.  My map awareness is absolutely terrible. so I can improve there substantially.  I saw in a video someone saying that they would look at the minimap whenever they killed a creep, but...I have problems with that.  I like to game to unwind, and to play this game properly is work.  I see a skill ceiling in my future!  Building on that, when a teamfight is breaking down, I need to know it is going on, and when we are wrecking a base, I should be there.  I went to bot just because the announcer was annoying me, and while pushing bot might be good, I should have helped to secure the ancient.  My last hitting skills are still not ideal, and I was using a quelling blade the entire time, so I still have a ways to go.  I am curious to see how a single draft match would go with me, but I feel like I would be competent with about ⅓ of the player pool, and could fake another ⅓.  I am terrible at micromanagement, so some heroes are well out my reach, but I think I could make it up.  I almost feel confident enough to be a solo mid carry against the current skill level.

As for the community....I kind of like it right now.  They were pretty inviting to me (having done my due diligence), and a lot of fun to play with.  Going back to Starcraft in the early naughts, everyone opened with a gl hf, which amused me to no end.  I found myself joking throughout the matches as we took towers.  A solo mid was able to take the T1 and T2 towers back to back with no help, and I used the old “what is the best pickup line at a gay bar”...It was met with a blank response of “...” and a discernable air of discomfort on the microphones.  “May I push in your stool?” followed by an uproar of laughter considering how bad we were pushing their shit in that game.  I had a TON of fun complementing Pudge’s hooks,  congratulating double kills, and just wrecking the other team.  In forty minutes, we formed a pretty amusing bond over a team based game online, and that is totally worth the price of....

THIS GAME IS FREE?  WHAAAAAAAAAT?!?!?
Login to vote this up!