One and a Half Weeks of DOTA 2: Impressions

As an aside, taterchimps guide to bluffing about anything:  know an item in the top 10% and the bottom 10% of whatever you are talking about, then pick an obscure item from the 60-70% range as what you ‘like’.  Cars?  I would love a Porsche 911, heh, who wouldn’t.  But I think ideally a BMW 4 Coupe would be nice.  It wouldn’t be a Pinto!  hahaha.  Pistols?  A friend of mine loves her Deagle, thing is massive!  If I were to get a pistol, it would probably be something like glock.  Would be better than a Derringer against a bear in the woods, eh?

That being said, I failed every bluff I thought I knew on DOTA.  I knew what lanes were.  I knew heroes were involved.  I knew that there were NPC mobs and towers.  I knew it was recently ruled unconstitutional, and that it was a MOBA.  Absolutely none of these things worked like I thought they would.  Now, I really want to find the game fun, and there are parts of it that are, but in order for me to get the point where I can beat the super dumb difficulty AI and feel like I accomplished something, I had to do some hard research.  Before game 1 (with my friend, but no mic) I read up on the game for about half an hour.  After my first match (which I rage quit super hard), I did two hours of research.  I would say my research to play ratio is somewhere in the 2:1 ratio.  So I wanted to present, as a complete scrub, my 1.5 week DOTA Impressions.  As an aside, I have been playing the All Draft mode (everyone can pick their hero, no restrictions).  As a further aside, I wrote most of this with intents to publish it, then played DOTA for another few days, so there are original comments and some with more experience.  They may contradict.  Good luck with that.

Impression 1:  DOTA is the Anti Call of Duty

What is gaming’s biggest pet peeve right now?  Actually, we might have to go down that list quite a ways, past DRM, and past tacked on multiplayer.  I would say past EA and Microsoft, but gamers love those companies for giving them such great grounds for a circle jerk, so they are lower on the list than homogenizing games.  Games today play to the lowest common denominator.  Look at Call of Duty:  Any player can pick up the game and have fun with it.  The worst player could (in theory) get the drop on the best and kill them with a lucky headshot.  The first time you play, you will probably rank up at least 3 times that match.  And that feels really, really good.

Not DOTA.  You want to play DOTA?  Shut up.  No you don’t.  You want to learn DOTA.  If you have never played a MOBA before and have this game, play it.  Go online, or even against bots and play it.  Try and have fun.  You can’t, you loser.  If you do not know the mechanics, if you do not know the keybindings, the game will knock you on your ass faster than Zidane in a headbutt contest.  He still relevant?  Whatever.

But here is the thing:  This is actually incredibly refreshing.  I don’t think I have ever seen a game even try as be this complicated before, and that makes it feel special.  For instance:  each character has 3 abilities and 1 ultimate, except characters that have 4 or 5 abilities, and the one guy who has ten ultimates.  TEN!  Any game that was meant to be distributed to the stereotypical/imagined dudebro shooter crowd could never have a guy with ten ultimates that you can to memorize and control  There wouldn’t be items with paragraphs of text describing what they do.  If the designers think something might be cool, it seems like they throw it in there, and that is incredibly cool!  It has made me reading through wikis nightly to see what each item and each hero can do, then getting hyped up into playing one more match. 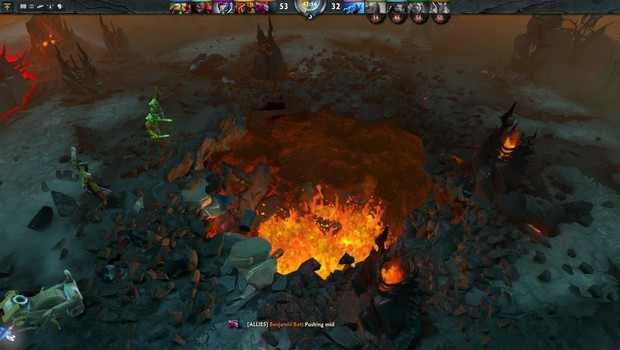 Suck on that, ROBOTS

Impression whatever:  The Procs are MLG Pro Level

I literally just found this out, and it kind of blew my mind.  So some items have a percent chance of ability, say a 2 second stun has a 25% chance to hit.  Well, using normal random number generation you could, in theory, miss the proc 20 times in a row for it.  This game implements a system that still keeps the odds at 1 in 4, but guarantees you will hit in less than 12 hits with it.  How?  They increase your percent chance each time you miss for it to proc, but start it off well below, I believe at 8.5%, then the next swing is 17%, the next is 25.5%, etc, and the overall result is, on average, 1 in 4, but in practice, never more than 10. After it procs, your odds to back to 8.5%.  The reason?  You don’t want players to rely on luck.

I could keep going on and on.  Basically, I have a pretty huge adoration for this game, if only from watching it from afar.  Peering at just how deep this game goes is truly a humbling experience.  I already feel like I will really grow to love the game more and more as time goes on, maybe even more as I get online.  My hopes are that my training makes it so I can breeze past a few matches, dominating people who haven’t put in their due diligence, but I fear that I will realize just how quickly I can be outclassed.  This game has potential to be anyone’s most played game, and for good reason.

That being said, this game is in NO WAY designed for everyone.  If someone ever says “I shouldn’t have to study for a month to play a game” they are totally right.  This game is ridiculous.  It is not pick up and play, it is not fun, it is not easy.  And people play games for different reasons, and many times people just want what is fun and what is easy.  Typically after rage quitting DOTA, I have been playing Borderlands 2 as a Sniper.  Sit back, point, shoot, watch the crits fly.  It feels empowering, it feels relaxing, but it also feels....hollow.  It is crisps compared to the deconstructed poutine with white truffle aioli on it.   People shouldn’t have to try to get into it, people shouldn’t have to do their research to figure out how to enjoy it...but once you do.  There is no turning back.

You guys?  I love this game.

(All screenshots are from my latest victory over the robot team on medium difficulty.  I had a bkb, and a force staff, and an urn of shad-oh dear god I'm becoming one of them aren't I?)
#CommunityReviews
Login to vote this up!