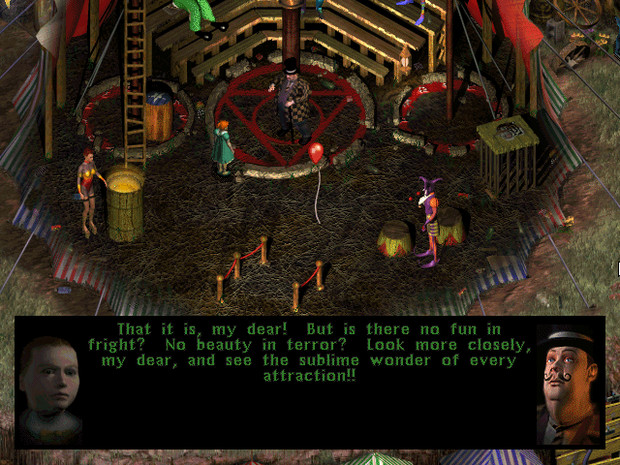 Proudly taking inspiration in Alice in Wonderland, Sanitarium is a game full of apparently random fantasy elements that anyone who doesn't give it his full attention will find merely amusing. That's why the adventure game format fits it so well. As you're constantly looking for clues to solve the mostly trivial puzzles, you focus on the details of these dream-like worlds, and you start drawing lines between them to solve the real puzzle: Who are you? And why are you here, doing these things?. The answer isn't in ringing the bells of the church so the kid with the deformed face will leave his fishing rod up for grabs, but in the details that shape this place, a place formed in the mind of the protagonist, but also in the mind of the player.

I guess what I'm trying to say is that the story is multilayered. On one hand you have a very concrete situation in every dream/world you come across, and problems will come up in that story in the form of puzzles, but on the other hand, all these say something about the broader story, which is the real life of the protagonist. Weirdly enough, my first cblog was about a game idea with a very similar concept. My thought when writing that and when playing this game were very similar; games are a great way of creating metaphors, and it's a shame not many games have exploited that potential.

Sanitarium is wonderfully creepy, it tries some new things, and does some old ones well enough. For some it might be too weird, but for any fan of adventure games, this one's a gem.


P.D: More unsettling screenshots in the image gallery, with a look at the inventory system and the annoying puzzles. Also it's dirt cheap on GOG for the next few hours.