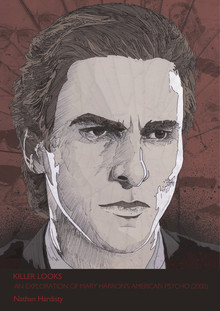 Happy Independence Day! From the country that used to own America!

Around a very long time ago I thought it would be fun to write a book about Blade Runner. Soon after, I thought it would be equally fun to do the same thing, in about eight months time, with American Psycho. Killer Looks is the sixty-page product of that stupid stubborn idea, and now it's all released in all of its shoddy glory. It's a labor of love and sleepless nights. I lost twenty pages of the damn thing around a week or so ago, and this morning I decided an entire section just wasn't up to my standards.

Killer Looks is a book about the film American Psycho, an adaptation of Bret Easton Ellis' wonderful satirical novel. Throughout the book I evaluate interpretations, the psychology of characters, feminist arguments and the political and social message underneath the entire picture in a bid to find what a 'film' really is.

I've enjoyed getting soaked in Patrick Bateman, but I shan't be doing it again anytime soon.

The full eBook can be read in two versions.

Click here for the PDF version, save as if you want.

I will be working on Kindle, ePub and toaster editions at some point.

John Pearson did the luscious cover art. His website can be found here and you can also buy fancy prints of the cover art specifically here too (for a limited time or something). I think we might be doing some fancy printed copies of the book at some point, I'll letcha know if that'll be the case.

For now, ta ta! I have things to catch up on including food and hydration. I'll see you all in a month's time for my next bookywook!

Cheers,
Nathan
#Off-topic
Login to vote this up!