My gaming story: A multiverse of possibilites

4:34 PM on 06.29.2013 (server time)    0
It all began with kicking and screaming... and clinging to the doorframe of the arcade because I didn't really want to go. I had entered a new world and suddenly I knew what my thing was, what would be my passion for years and be my all-consuming reason for living.

Video game were that reason. There I could find myself hopping over barrels, driving race cars, shooting space bugs and being a cheese wheel that ate ghosts. This was the beginning. That arcade had contained a multiverse of worlds that would eventually also show me ice climbers, street fighters, knights that jousted on ostrich-back and other strange places.

To sate my hunger for games my parents started by getting me some of those lame Commodore 64 games that were really just knock-offs off better things at the arcade. Yes, even back then we had iOS-grade shovelware. In this case it was Chomp-Chase, a game where you are a much slower and less-interesting cheese wheel that eats ghosts and Super Paratrooper which was like the army version of Space Invaders but also kind of one of the earliest tower defense games. You were just a large joystick-shaped turret - if you missed too many of those paratroopers before they landed they'd just eventually shoot you up and take you apart.

But my sister and I got bored of those two games fast. Soon we were back to building couch cushion fortresses and toy mountains in the living room... or making mudpies in the backyard which scared our collie a bit.

And lo, the parents decided they would get a Nintendo Entertainment System because it was the closest thing to arcade graphics and had a selection of more interesting games. It came with the Super Mario Bros./Duck Hunt cart and those were fun, but my dad kinda hogged Duck Hunt and my sister... well, she got too into SMB, always jumping with Mario and jerking the entire NES off the shelf and straight down to the floor below. 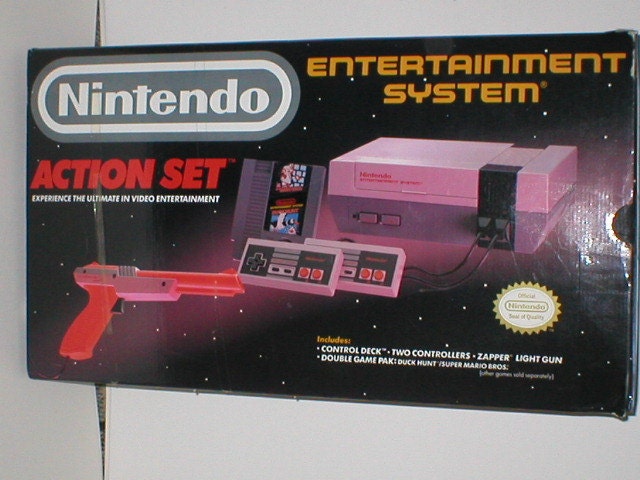 That's when I learned about the sturdiness of Nintendo hardware. A lesson I've learned again and again. I've even seen a 3DS bounce pretty high off of a concrete floor. Don't ask me how I managed the bounce, I'm still not quite sure. It still works just fine.

Ah, but I still haven't gotten to where things really began - The Legend of Zelda and Metroid. Once video games gave me larger worlds to roam, that was when I was really hooked. Prior to this I was quite the intrepid outdoor explorer, but you tended to come home sweaty, dirty, muddy, people didn't like when you tried to set things on fire and then you had to have that tick check when you came home even if you were just climbing up trees.

Well, no more of that once I had Zelda and Metroid. Now I had a worlds where I could be a pyromaniac or a demolitionist to discover new places. Sometimes the worst consequences were Moses charging me a lot of rupees for burning down the bush-door to his house or walking into Tourian without the Ice Beam and having the life sucked out of me by floating, vampiric space ticks. That last one is still a bit disturbing, but a that didn't get me spankings like the playing-with-matches thing did. 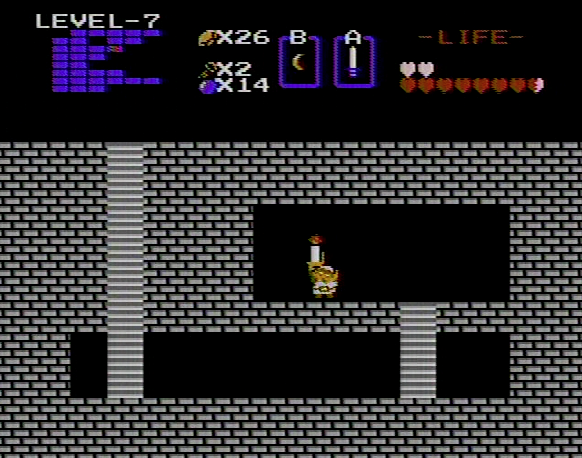 Sometimes people were nice about my curiosity, though. Ancient spacebird people left all kinds of neat weapons and missile expansions around to find and then there were those turncoat Moblins that would hook you up with rupees so you could continue your war on Ganon.

It didn't end there, it only grew. Link and Samus would have many more adventures and explore strange, new places. Meeting new kinds of life and dead civilizations. Boldly going where no pixels had gone before.

Later my exploits expanded into games like Dragon Quest and Final Fantasy Legend. Those were really my first RPGs, full of things to explore - even if some of said exploration was scrounging for things and stuff square by square. I did defeat the Dracolord, but I have to admit making the deity-killing squad of female mutants in FFL was a bit more fun for me.� And FFL's overworld theme was a bit more spirited and less melancholy than DQ's.

Final Fantasy VI (shut up, its VI, not III, VI) and Super Mario RPG were also a couple more of my gateway RPGs. It was then I learned Bowser could be a hero and the Mushroom Kingdom was pretty dysfunctional even with Mario around to save the day. With Final Fantasy VI I do regret defeating Kefka in retrospect, since he, too, was against Doma. I didn't agree with how he went about things, though, and that's why he had to be put down.

As time went on I would find more and more worlds to travel to. One had a time-travelling frog knight and a cavegirl, another consisted of a boy out of quest for revenge and asking questions about sailors. I met Link again after a trip through time and he was in some crazy town where everyone was depressed about the moon falling on them. There were also these kids that did tricks and spray-painted stuff all over Tokyo which didn't make the cops happy.

Later Deus Ex would teach me the joys of always looking for an air duct and Fallout would free me from the vault to make small talk with supermutants. They weren't all bad. I like that Marcus guy who sounds like Worf. Oh, and one day I later found myself in Tamriel and I met this lady who I killed for her boots. Turns out they let me run real fast but I couldn't see a damn thing when I wore them. �

Often, I might be exploring a surreal, post-apocalyptic version of Tokyo. Or sometimes I'm part of a tribe trapped inside a Mad Max-style virtual prison. Or a dimension-shifting luchador that can transform into a chicken. Or a mayor in a town populated by animals who've taken a progressive attitude toward crossdressing.

I play games because they just keep giving me these great worlds to explore and make me smile with their wonderful weirdness. Only in video games can you fight hordes of the undead in your heart-patterned undies or hop inside a TV and fight subconscious evils to solve murder cases. Only in video games will you ever answer an AI's questions by jumping or be a party of humans fighting carnivorous robots on the backs of two dead gods.

With so many places to go and so many people to be; with an entire multiverse at your finger tips - who can really say "no" to that?