Sega's Classic Franchises: Could They Be Brought Back? (pt. 2)

Some of Sega's Classics Reimagined for Next-Gen

If you missed it, you can check out Part One of this blog here. In it I talk about how Sega has abandoned a lot of great IPs, and some formulas that might be used to reboot them. In Part 2 I want to get specific. So let's take some of Sega's classic IPs and consider how they might be reimagined for the 2010s. I have better ideas for some than others, and I'd really like to hear your thoughts as well. I'm going to focus on AAA reimaginings for the most part, rather than straightforward HD reworks based directly on the old games.

Revenge of Shinobi is hands-down one of my favorite Genesis titles, and yes, my copy has the bosses that rip off Godzilla, Spiderman, Batman, and Terminator lol. I really, really don't know why Sega has left it to rot, especially when it has so much potential. So how might it be given a next-gen overhaul? I have a few ideas.

One would be to do a game similar to Arkham City. While Musashi isn't a a gadget-focused character, there are plenty of mobility, fighting, and ninja abilities (smokebombs, throwing knives, enhanced stealth, etc) that could be upgraded as the game progressed. Going with more tightly packed buildings would let him jump back and forth to scale them.

Perhaps better would be to stick with smaller but more distinct levels, each with a specific mission. This would be more like say Thief or Dishonored, where Joe would have a variety of ways to approach the mission. The levels could also be made replayable; as Joe unlocked new items and abilities, he could try new approaches and be rewarded by completing the mission under certain parameters. Multiple difficulties might be useful here, too; think of how Goldeneye 64 added more objectives based on the mission difficulty.

Finally, I remember playing Mirror's Edge and wishing to hell I had a sword. A ninja's parkour-like movement abilities might be fitting in a game like that, even if the levels were more linear. This would be kind of like translating the original game's linear levels into a 3D environment, with speed and efficiency and sheer style upping experience bonuses etc. Going third person might be a good idea, though, if only to make the combat more practical.

And don't forget Shadow Dancer. Could Joe's dog somehow be integrated into some of these gameplay concepts, even if only for certain levels or as something to summon when you are in bad shape?

"Really? Altered Beast?!" Yes, really! Sure, the original arcade game and its Genesis port were rather brain-dead games, though they were a bit of fun. Yet I see a lot of potential in the IP. The idea of being able to transform into a variety of were-creatures is great, and that alone could carry a game. Imagine Altered Beast as a third-person metroidvania. You would start off as just a human, gaining in physical strength and ultimately the ability the change into various were-monsters through the game. These transformations would then allow you to reach areas you couldn't before, supporting metroid-like backtracking to re-explore earlier areas with your newfound abilities (eg the dragon being able to reach high areas, a were-rhino being able to smash weaker walls, etc). Each creature could have different levels of power, too (early dragon could perhaps only do wing assisted jumps or hover; gaining the ability to breath fire would be another addition). You could also limit the time you were able to stay in were-form, adding more strategy to the battles, or allow on-the-fly transformations for crazy combos (imagine dive bombing as a dragon and shifting to were-bear at the last moment to smash through a group of enemies). And the setting would allow for all manner of freaky monsters to fight, as well as some truly epic boss battles. 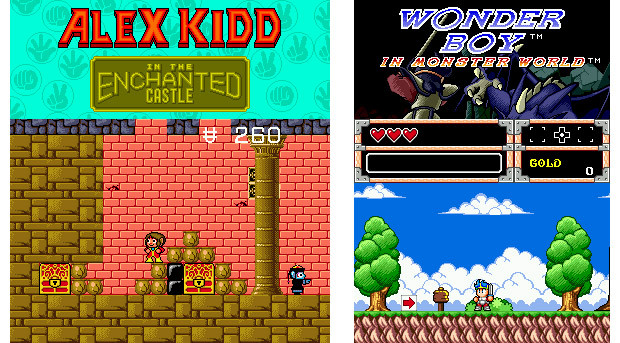 Any of these games would translate nicely into either a modern 2D (eg New Super Mario Bros or Rayman Origins) or 3D platformer (eg Mario 64). They are some of the weaker, lesser-known IPs, so going for a lower-budget title might make more sense. Though a Zelda-like Wonder Boy, even in 2D, might translate into an excellent AAA action-adventure title. It's also worth mentioning that, especially in his modern form, Sonic is really nothing like Mario. Ristar could provide that kind of experience, though. (Silly Mario! In Soviet Russia, stars collect you!)

As much as I love SoR, it's one of the most difficult for me to reimagine. A budget HD sequel that keeps the same formula would be the obvious way to go. But what if we tried something different? How about a third person action title focused on combat like Devil May Cry? How could we set it apart? Allow co-op play, online or 2-4 player split-screen. This would allow for multiplayer combos (eg lemme hold this guy while you punch him), as well as players being able to assist each other, Left 4 Dead style, when they are pinned or cornered. By adding multiplayer, we'd be keeping an important part of the original game while simultaneously setting the game apart from other third-person action titles.

This formula might work nicely with Golden Axe, too - beyond the settings, the games are very similar. Although Golden Axe also has the elements needed for a great action-adventure RPG, too...

I really want a new Phantasy Star that is not an MMO. One possibility would be to forget the JRPG stuff altogether and try something more Bethesda-like. Imagine a Phantasy Star world as a vast as Skyrim, but far more vibrantly colorful and mixed with technology. You could keep exploration slightly more limited (some areas aren't accessible until certain tasks are complete, just like the original games), but the idea of the Phantasy Star world remade in Skyrim/Fallout-like scope? Amazing! Companions would certainly fit in. How about we start with Nei?! The same idea might be applied to any of the other Sega RPGs, and there are many other examples of RPGs in modern 3D form that might be taken as initial models.

Another possibility would be to mix JRPG-style storytelling and its larger parties with Diablo-like ARPG combat. That's similar to the first two Dungeon Siege games, which used a party system to set themselves apart from Diablo. Okay. Hmmm. Oh wow. Yes, yes, yes, I am really liking this idea. The turn-based combat and random encounters were by far the most irritating part of Phantasy Star II and many other JRPGs. This would remove the annoying stop-start-stop-start of turn-based encounters and really let the game flow. 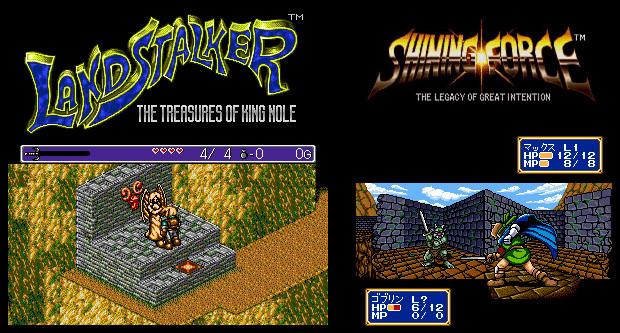 Landstalker, though, is unique in this bunch. It's more an "adventure" game, and was meant as Sega's answer to the SNES's Zelda at the time. While the isometric perspective caused some frustration, the game was generally well-received. Why not give Zelda some competition again, either by bringing back Landstalker or doing an adventure game spinoff of one of those other RPG titles. Either a top-view or third-person 3D view would work, depending on budget and intent. No isometric, though!

Most of these games are so purely arcade that it's hard to image them as anything else. Or is it? I can think of two models that might be excellent for reworking them into the modern era, particularly the first three. First, it's pretty easy to imagine doing a game similar to Rogue Squadron with Galaxy Force. It would require a bit of world-building, as the IP is sparse on story, but if the game could keep the over-the-top bombast of the original arcade hit it would be a very exciting title. It would also scale; it could be done as a AAA retail title, or as a smaller download title. Panzer Dragoon might fit the Rogue Squadron formula nicely as well.

Thunder Blade, on the other hand, might be reworked as a sort of 3D Desert Strike, or perhaps redone as a twin-stick shooter like Renegade Ops. It and Afterburner might also work as semi-simulators; games that mix arcade action with some more realistic flight physics.

The Genesis' classic, original 2D fighter. Not much need to update the basics here - 2D fighting games are still "a thing". But you could also bring in more Sega characters to round out the roster. I'm not saying go Smash Brothers and bring in cartoony characters. But Shinobi and the casts of Streets of Rage, Altered Beast, and Golden Axe would fit right in. Hell, Sega might have a big enough roster to simply make a fresh fighting game (and cherry pick a few characters from ET to join in the fun). "Shinobi & Sega All Stars Fighting Championship"?

What Do YOU Want to See?

Okay, that's quite a huge list and this is a way longer blog than I meant it to be! I'm curious what you think of these ideas, what your own ideas are, and what ideas and IPs I'm missing entirely here. There are some genres I didn't get to like Sega's racing (Rad Racer, Outrun etc) and lightgun (House of the Dead) games. And off the top of my head I've also missed Fantasy Zone, Space Harrier, Nights, Space Channel 5, and Jet Set Radio Future. Any ideas for these titles?

In any case, it seems to me that Sega is sitting on a gold mine of cool series. So get off your butt and do something with them, Sega! In the meantime, all we can do is dream...
.
.
.

Though modders and indie devs might take matters into their own hands, too... 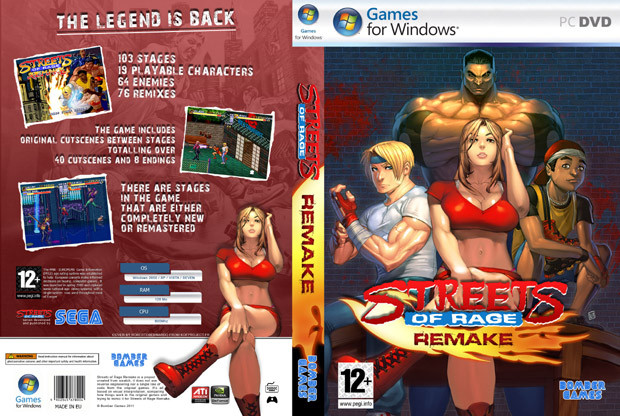 Streets of Rage Remake was shut down by Sega, but not before the game was completed (you can find it on torrent sites, and it's quite good). I believe the fan-made cover above borrowed from this artist's work. Included because I love Blaze and she's, umm, smokin' in that pic.

This mod takes the best levels of Sonic Unleashed and puts them into the gorgeous Sonic Generations engine. I was shocked to find this mod, I didn't think these games could even be modded. I wonder what's next...