Last year, I bought Skullgirls and this heavy $200 arcade stick. I couldn't really play against many people online back then, but I kept myself busy by learning how to play each of the several fighting games that came out that year.

I've been able to play online with more regularity recently, thanks to getting a fiber-optic internet...thing. I have no idea how it works, I just know I can play fighting games online mostly lag free. So after training as well as I could, I got the crazy idea to go to my first tournament ever. 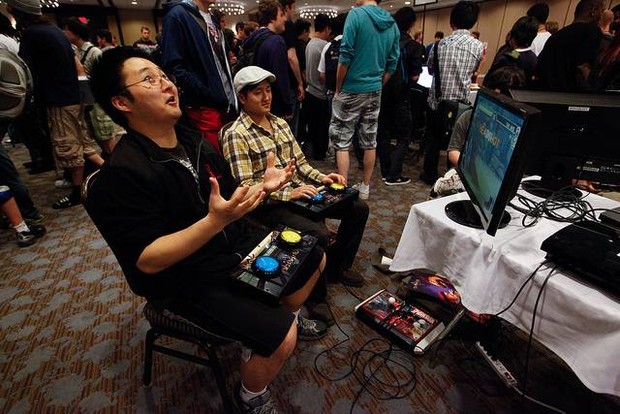 Anyway, I did somewhat well in this tournament! Didn't get out of pools, but I beat a fair amount of people and even �frauded� two of them (when you win five rounds to zero). By the time I was eliminated, I got a good amount of experience, and even got some direct training on how to play Markman by the tournament organizer (Thanks Keits!). I'll definitely be picking up this game when it comes out.

Saturday[u]:[/u]
Skullgirls:�Holy crap, I did terribly in this game. I mean, I had an idea of how bad I was (because I lose every online match I play), but it was even harder to deal with in person. I played three matches and didn't take a single round from anyone I played. Didn't even get close. I did play a couple casual matches afterward, but didn't do any better or learn much from it. Then again, I didn't know where to start as "how do I get my ass kicked less?" doesn't tend to lead anywhere. Oh well.

BaraBariBall:�I entered this tournament because of the free entry, and was pleasantly surprised when I finally got my hands on it. First of all, this game should have had some more exposure. Until the finals there was only one table with two setups to play on, in the back of the ballroom. It's a really fun game, a combination of Super Smash Bros and...whatever sport it is where you have to dunk a ball into the opponent's pool of water.

Luckily I shared a hotel room with two experts of the game and learned a lot of tactics from playing with them. I beat a few people in the tournament but was ultimately eliminated. Like Divekick, it's a game that's simple to pick up but takes a certain amount of skill to master. It is very accessible, but practice and character knowledge pays off.

Here's a video of the aforementioned experts playing to better illustrate what it's like.


Mystery Game Tournament:�This was really special, and something that sets UFGT apart from other fighting game tournaments. There was a small setup of three TVs near the main stage where you entered into a tournament playing...something. At seemingly random intervals, the tournament organizers would switch the game to something different. I saw Sonic Adventure 2 Battle being played, Virtua Fighter Kids, weird, obscure fighting games I had NEVER heard of, and Hydro Thunder during my pool.

To sum up how strange and fun this tournament was, one of the finals matches was Soul Calibur 2 on DDR pads. It's that real.

I had way too much fun and laughed way too hard while playing these weird games, and I will be entering the Mystery Game Tournament for sure at next year's Ultimate Fighting Game Tournament. Here's a video of the Grand Finals, where you can really see how most matches go: players scrambling to find out how to play before eventually figuring it out and putting on a really hype match.

Since I was eliminated from every game I entered by Sunday, here are some other things I just wanted to note.

CHECK-INS: Remember to be early for your tournament pools, everyone. Because sometimes they'll pronounce your name wrong and it takes longer for you to check in than everyone else. Most people don't use the term "perfidious" in normal conversation, you see.

MARVEL VS. CAPCOM 3: I watch a ton of streams, but I've never actually seen this game being played in real life. Holy crap, it is fast and flashy. The streams really don't do it justice. After watching some matches, I see why people get so into this game: it's like it was created specifically to draw attention and excitement.

People got REALLY serious about this game too. While I was in Divekick pools I heard some guy yelling at the station behind me. Turns out a full-on argument about the game/car ownership had broken out and he was getting REALLY upset. So upset that photographers rushed over to capture a possible fight breaking out. And during finals, another fight almost happened on the main stage!

Myself and a lot of other players talk a lot of trash about Marvel vs. Capcom 3, but I understand now why people get so into it and why it's considered the most hype fighting game out. I probably won't play it ever, but I understand.

FUN & GAMES: While I had some downtime, I checked out this fun little diversion. Located near the back of the ballroom, there were three $1 entry non-video games to play for fun and profit. Yes, games where you actually had to interact with people IRL.

If you won any of these games, you get a raffle ticket and a lot of �doubloons� to cash in for prizes at the prize table. To make sure everyone had fun (and kept giving money to play!) they even gave losers a small amount of doubloons. Basically, you messed up if you left this tournament without getting SOMETHING from that prize table.

I spent most of my spare cash playing Divekick 21, a blackjack variant where you basically have hit points and can pass undesirable cards to others. So while my first few games were pretty amicable, some people want to play a little rough. That means DIRECTLY BUSTING OTHERS BY HANDING THEM CARDS in blackjack. It was really fun, and I even won a game!

I played a friend in Balrog Ball as well, which I can't describe but reminds me of a similar ball-rolling game that I played at Magic Mountain years ago...plus Street Fighter. The important thing is, I beat him and got another raffle ticket and some more doubloons.

I didn't win any of the raffles but left with a cool UFGT9 mug full of candy, and a small, fancy glass (also full of candy). I hope the Fun & Games tables return next year, as they're a great way to kill time between your matches. Or just hang out...I swear I saw some people just playing these games the whole tournament and never saw them play a video game. It was that good.

THE CROWD: This is another reason why I want to go to more tournaments. You really can't get the same energy watching a stream than you can watching these players live while sitting in the crowd. These people were absolutely hilarious. A man of questionable sobriety with a funny hat spent $100 combined in character auctions for Injustice and Marvel vs. Capcom 3, only to lose immediately and get mocked by the announcer on stage. But he won a raffle later so it's all good.

Audience members pulled out money to bet on an impromptu rock-paper-scissors match. People not only react loudly to someone pulling off flashy combos in a game, but yelling along with the characters on screen as they did super moves! My personal favorite being a few upstanding citizens yelling �FUCK YOU!� as Lobo flips off his opponent.

I also noticed that after every match I played, a handshake (or fist/elbow bump if you're germaphobic) is customary. Even if it was the most rage-inducing match ever, you shake hands. It's just a video game, in the end.

This match is pretty incredible to watch, but being there and hearing the crowd lose their minds at the conclusion made it unforgettable.

There's so much more to add, but I'll wrap it up here. Next year, I want to go back, improve my game, and bring my own console to play Virtua Fighter 5: Final Showdown with others. I saw some people playing it in the Bring Your Own Console area but didn't have time to join, unfortunately.

Going to a tournament was a humbling experience, as I learned that I'm nowhere near as good in any of these games as I thought. I have a long way to go, and I won't excuse it by saying �well, I spread myself too thin by playing too many games�. Nope! It gave me the drive to learn more and compete even harder in the future.

If you're even remotely interested in fighting games, go to a tournament. It was expensive for me, but it was worth it. I can't say what you'll get out of it, but what I got was a renewed interest in the games, and the motivation to improve myself even more as well as attend local tournaments.

It showed me, for better or worse, what games I really want to put more work into. At this point I'm still playing Persona 4 Arena regularly, I've gotten back into Virtua Fighter 5 Final Showdown as pretty much my �main� game and am playing it a lot, and I got so discouraged by losing in Skullgirls that I haven't touched it since...I don't know about that one now. We'll see.

So, thanks to Keits and his staff for making the tournament run smoothly and providing TONS of extra stuff to do outside of competition. Thanks to all those Godlike Sundays guys for sharing a hotel room, being hilarious and fun to hang out with, and keeping me up at 4 AM playing Capcom games, damn it. And thanks if you read this. Hopefully I've sold you on seeing a side of the fighting game community most casual players don't see.

I'm still playing all the fighting games I can get my hands on, too. I've got Tekken Tag Tournament 2, Street Fighter X Tekken and Injustice to work through so one of those will be up next.