A Shoggy Bit of E3 Wishes and Speculation

7:15 AM on 06.03.2013 (server time)    0
Hello Destructoid, you're probably wondering a few things. Who or what is a Shoggoth? Why is it talking about procrastination? What exactly is this thing on my other tab and is it safe for work? Well I can answer the first two and take a wild guess at the third (it probably isn't, I'd close out of it now if I were you). A Shoggoth is a Lovecraftian horror known for its shape shifting abilities but in this context, it's just what I like to call myself. Is it because I'm flippant? Not exactly but I won't hesitate to change my stance on something after X amount of time has elapsed.


My stance on the Xbox and Microsoft for example! If you asked me back in 2001 about the then upcoming game consoles, I would have said "'I want the Xbox because it seems like it'll be the strongest and therefor offer the best games". If asked about then-next generation consoles again in 2006 I would likely say "The Xbox 360 seems like the friendliest console and besides, I really liked Fable, Halo, Otogi, Mech Assault and, Crimson Skies!" When asked which of the next generation consoles I'm most looking forward to today however, I'll likely cock my head to the side and reply with, "I already own a Wii U, I'm just waiting for more games to be released for it...would you like to come over and watch Star Trek on it with me?"

Since the Xbox One reveal though, I've gone from being mostly uninterested in Microsoft's latest console to completely sickened by it. There is a silver-looking-lining though and that's the fact that Microsoft is boasting 15 exclusives for the console which will be revealed at next week's E3. We can all hazard a guess that the words Halo and, Gears will be used for some of these properties and, maybe even Fable; all we know now is that Forza is one of the illustrious 15 so what about the other 11? I have no idea but I think I have a good idea for a few of them.

Revival and Rebooting seems to have been a major theme of the past few years in entertainment as a whole so I think it wouldn't be too far fetched to assume Microsoft will do this to an extent. We know that Rare for example has teased the revival of a historic IP which could be anything from Banjo-Kazooie to Killer Instinct and, maybe even Conker. Since the Xbox One mandates the use of the Kinect 2.0 it's also safe to assume that Rare will be working on Kinect Sports season 3. Other properties that have been exclusive to the Xbox in past (and thus ripe for rebooting) would be Whacked, Fusion Frenzy, Crimson Skies and, Mech Assault. If all of those are being rebooted then that leaves several holes open for completely new IP (not counting Quantum Break so there's at least one hole filled...shut up).


I don't have any proof that any of those will be announced or even made. For all I know the next time I can play a round of Mech Assault or, Whacked will be the next time I boot them up on my Xbox. Also, despite a complete lack of proof from any source at all, I can't get it out of my brain that Fable 4 is around the corner. Journey didn't seem to kill the franchise anyway and unless I'm mistaken Fable 3 sold despite being pretty terrible (opinion).

Now let me talk a bit about things that are far easier to foresee: Nintendo's E3 event. I'm lucky enough to live within a few miles of a Best Buy that will be hosting some of Nintendo's E3 demos (Strangely the Best Buy that was chosen is the worst one in my area). As was stated in another article, Nintendo has claimed that 4 unreleased Wii U games will be playable at this E3 event. Since so little has been said or seen of Mario Kart U, I really don't expect to see it turn up at my local Best Buy: The same can be said of the next 3D Mario and especially Smash Bros U. The next Nintendo Direct will more than likely talk about all of these games but I don't see them being playable. What I do predict will be playable however;

Mario and Sonic at the 2014 Sochi Olympics

A lot was shown of Mario and Sonic at the Sochi Olympics which leads me to believe that it will be presentable as a demo in time for E3. Pikmin 3 has been in development and was indeed slated as a launch-window title so that's what makes me sure it'll be at Best Buys next week. I've only seen screen-shots of Unmasked but I think it would make for great PR for Nintendo to show off enough of that game to confirm that yes; there are literally several hundred Batmen in this game (and hopefully Snowflame). Sonic Lost Worlds would be a wild card: I was weighing that against Wonderful 101 which was another launch title game and wouldn't be surprised if either were playable next week. This is all conjecture on my part of course and could be completely wrong. New Luigi U and, Game & Wario will be out in June after the event so I'm hoping they aren't one or two of the 4 playable Wii U games at Nintendo's E3 event; especially considering importers have likely already reviewed and rated Game & Wario. 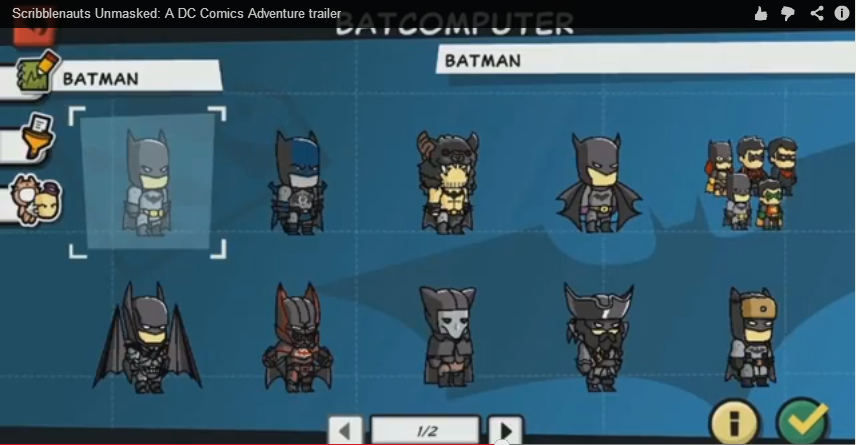 I guess Yellow Lantern Batman is on tab 2


Of course we won't know until E3 what will be announced, shown off, playable, etc. I have to confess though that I haven't been keeping up with Sony and their developments. It's not because I dislike Sony, I actually have a PS2 hooked up to my TV (though I've been using it to play nothing but Final Fantasy and romantic-comedy anime). The fact that Sony is going to do better than Microsoft though already seems like a foregone conclusion so I don't feel the need to follow them too closely. I do look forward to seeing the actual PS4 though, once it's revealed next weeks...hopefully. I look forward to E3 this year even though I'm too far away and not nearly important enough to go to the true event. Luckily, I'm able to visit E3-Lite at my local Best Buy which is far more than I've ever been able to do in the past. What about everybody else though? Any predictions, expectations or, hopes for E3 2013? As a last word I'm going to express my hope that Nintendo will announce that it's planning to revive Teleroboxer and release the newly revived 1st-person robot-boxing sim on the 3DS.

You know you want some of this
#General-Opinion/Editorial
Login to vote this up!