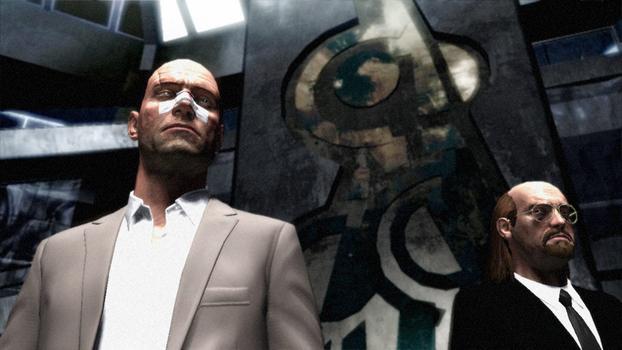 (Let me preface this and state this is my first blog. So it'll likely be very rough around the edges.)


I'm proud to say I'm a huge fan of "Kane & Lynch: Dead Men". It was the first game I was truly hyped to play on my new PS3 and despite all the bad press around it I genuinely enjoyed it. From the moment I heard of the game I was enthralled. The marketing had me in it's grips hook, line, & sinker. Then i finally got to play it and I fell in love with this hideously gorgeous game. Now I'm no apologist for this game but I think it's a true gem that gets a bad rep.

The game is heavily flawed. The controls are unnecessarily stiff. The AI controlled team is stupid and them repeatedly telling me "FUCK YOU" wears on my nerves. Hell the gunplay is down right horrific. I've played many a shooter far superior to this game. But this game still won me over.

The game has a scummy kind of charm to it in my eyes. At the time I had seen nothing like it. It was felt like I was in a heist movie with a gang of psychos. The characters are some of the most morally reprehensible creatures I've ever seen in the medium and  I loved them. I find that it's rare that you find a story cast their lead as a truly despicable person. It's refreshing in my eyes. I'm tired of the cool rebel anti-hero who secretly has a heart of Gold. Kane is a savage bastard and doesn't shy away from it. And he only has the scars and broken family to show for it. He doesn't try to repent for his crimes, he doesn't care about who he's hurt, he's only out to save his daughter who hates him. He's not even heroic in that sense he's still being selfish. In a sick way he's more human than most characters in games or movies. Now for Lynch he was just a sick sick bastard. I loved how raw he was. I really felt like he would snap at any moment and just start killing everyone...which he did. I like they didn't try to balance the team out with a lighter personality. They basically chained two crazy men together, gave them gun, and told them to paint the town red.

Speaking of towns this game had some incredible locals. I was so excited to see where the game would take me next. Every new mission was a breathe of fresh air. Never having to just stick to one place for most of the game. The opening escape got me amped for everything that came afterwards. The bank job had me standing on my feet jumping around as I went deeper and deeper into the bank. And every second of the Japanese missions was mind blowing. This game had some incredible missions. But I have to say it all fell apart for me in Cuba. The story just took a steady dive me for me right there.

That's my biggest gripe with this game. The story is good but it falters for far too long after the construction yard fight. The introduction of the other "DEAD MEN' and the war zone just annoyed me. I mean the stakes were raised but it felt like it stopped being a heist game and tried to be a military shooter. I wasn't a fan of it. While I'm speaking on dislikes I have to mention the gun play again. At times I would almost rage quit the game because of how difficult it was because the shooting sucks. I wish Eidos would have taken the time to polish the shooting in this game. It looks like they put a lot of love(funny thinking any love can be found in a  game this dark) into this game. But couldn't be bothered to polish it. And the biggest issue I have with the game is it's endings. They just feel so pointless. While I love how bleak the true ending is. It's just make no sense to give me the option of having two endings if they are basically the same. (spoiler alert. If you haven't beaten it)


Why even allow us to rescue Rific and Shelly?

But what's done is done. I love this game and I'm deeply saddened with the piss poor sequel. But that's a completely different blog. With that said I'd love to hear what you guys think of the game good, bad, or whatever.
#General-Opinion/Editorial
Login to vote this up!