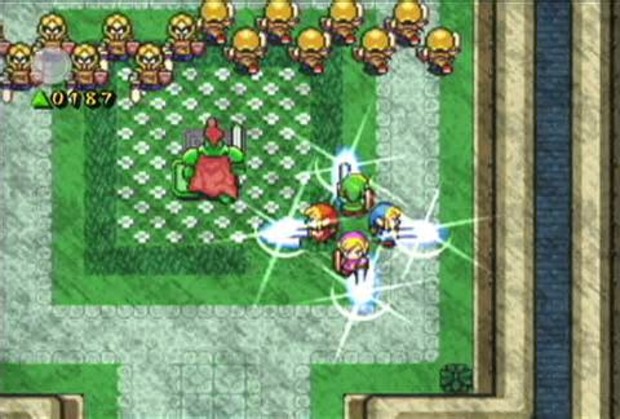 I bought this game when it originally released but never really had the chance to play it with three other players. I eventually sold it and, upon meeting some new people a few months back and starting to plan this evening, I repurchased the title. Sure, the hardware overhead is pretty insane, but damned if this isn't the most fun I've had with a multiplayer game since Capcom's Dungeons and Dragons series was in arcades.

Graphics
The sprites in Four Swords Adventures look a lot like those in Minish Cap. They do look a bit blocky on an HD screen but are overall quite pleasing. The lighting and special effects applied to the sprites are nothing short of amazing. I absolutely loved the effect of transporting to the Dark World; it has a very flat, Paper Mario sort of feel but is quite whimsical and charming.

Gameplay
As much as I love The Legend of Zelda series, sometimes the combat is a bit slow. Fighting a few enemies at a time is cool but sometimes I want more. For reference, I loved fighting the horde in SKyward Sword. This game mostly follows tradition but the group is sometimes tasked with fighting tons of enemies at once and that sort of chaos is nothing short of amazing. Honestly, arrows are flying, swords are swinging and bombs are exploding; it's a visual orchestra of violence that has to be seen to be believed. Nintendo wisely limited the amount of gear Link can carry; each Link has a sword and one item. This streamlines the game in such a way that no menus are needed. Such a change would have gone a long way in Final Fantasy: Crystal Chronicles.

Staying true to the series, this game isn't all combat. In fact, the group spends more time solving puzzles and trying to figure out where to go next. While that is very "Zelda," having a group to help out really makes this game feel unique. I've often thought using GBAs as controllers was overkill but I've definitely changed my mind after playing with the group. I loved having the ability to explore different regions than the other players while trying to figure stuff out. It also added a new level of depth to the game.

Verdict
The Legend of Zelda: Four Swords Adventure is the best multiplayer game I've ever played. The designers of the game made some very controversial decisions but they all pay off in multiplayer. There's nothing else quite like this game. All of that praise aside, the single player is pretty awful.

With the Wii U gamepad and Nintendo Network voice chat, Nintendo needs to release a new version with higher definitions sprites and online play. That would be the game of forever.
#CommunityReviews
Login to vote this up!