I know that there are a lot of concerns with regular bacon, just to name a few:  price, calories, not being kosher, so it seems only natural to want to substitute it with something a little bit cheaper in an effort to try and liven up your breakfast and/or 3AM drunken pancakes. 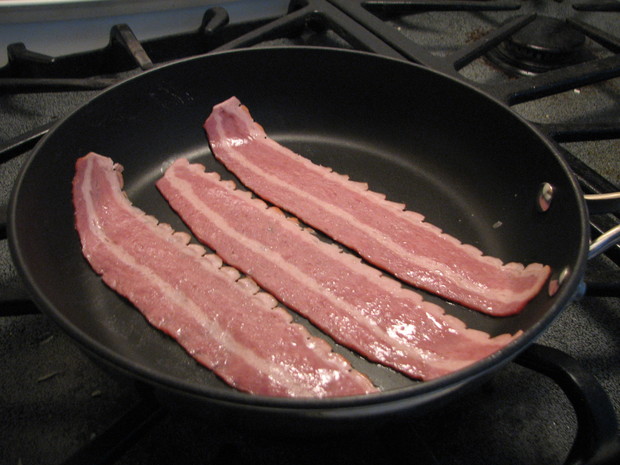 Finally, I tried to make a pancake in the remaining grease because there are few pleasures more guilty (one being frying thick cut bacon in a cast iron skillet, then deep frying an egg in the bacon grease.  I miss dating a girl who lived on a farm....)  The grease did an admirable job of trying to lend its flavor, but ultimately wound up imparting the unsavory musk onto what would have been an otherwise enjoyable chocolate chip pancake.

Overall, Turkey Bacon, to me, is like normal bacon dressing up in drag and trying to pick up guys in the bars downtown.  It looks the part, once you get it in your mouth everything seems to be right, but it doesn’t take long before you realize that everything has gone horribly wrong.  If I ever meet a strip of bacon in a bar, I would be checking for an adam’s apple is what I’m getting at, here.  Ultimately, you are left with a clone that doesn’t understand why the original was so appealing, and it just makes you want to go back to the original experience.

Overall Score:  7.5/10
[7.5’s are a hallmark of being pretty well alright.  You might want to eat it if there is nothing else greasy in your apartment if you are pretty well drunk, but you could probably also find a Perkins that is still open.  If it were to fix a few fatal flaws and throw in some fatback then it would probably be pretty darn good]

[Ed:  This was originally meant to be a review of Turkey Bacon that I had, and well, one thing lead to another.  Also, now I can totally go for some bacon.  Seriously.  Finally, any spelling and/or grammer mistakes are intentional and part of the parody.  Totally]
#Off-topic
Login to vote this up!