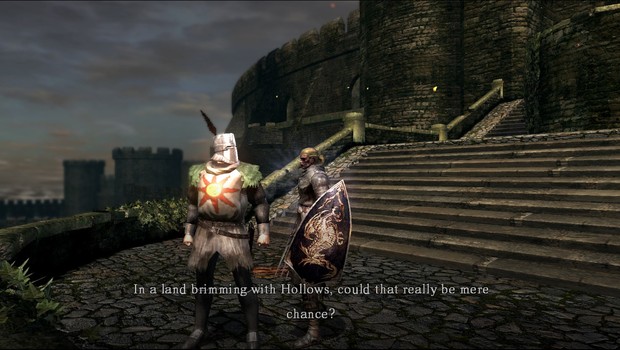 I wish I knew how to quit you, Dark Souls.  I have slowed down to get the above games in my busy, busy schedule, but I started up a Vega (claw, for you international readers) character.  As a challenge outside of just “use the claw weapon” I have decided to play the game hudless.  This is actually pretty cool as there is a lot of detail that I never noticed before when my HUD was sitting on top of it.  It also takes out the ‘choke’ factor from the bosses because I never know if I am really close to finishing them off or still have half the lifebar to go.  Spoilers:  Its half the lifebar.  The claw sucks.  I have been using strong magic weapon with the Oolacile catalyst to buff the damage against bosses, but I have made it to Simon and Garfunkel and just haven’t had the energy to get past them yet.  Like the Dragon Bone Fist, the claw has a laughable range, so it can be hard to hit boss characters in their boss genitals.  It also has a unique after roll attack in the form of you roll forward and do a lunge stab, which is really Vega like, but often times it is a liability instead of a hilarious luxury.  Notably against Rogers and Hammerstein where you are frequently rolling to avoid their attacks.  Maybe someday I will win against them, but for now a break to other games has been nice.

Finally, I put together a little video for you all to possibly enjoy, featuring all the games mentioned above:

So what have you been playing lately?
Login to vote this up!