12:28 AM on 05.02.2013 (server time)    0
Ubisoft has to get some kind of medal for putting Far Cry 3: Blood Dragon in the hands of gamers. Not only did they release it as an arcade title using the Far Cry 3 engine, but giving us something so unique that it is one of the most original, and wildly imaginative games to come out in years. Your name is Rex Power Colt, and you have to stop your mentor for taking over the world. That is as far as the story goes, the story here is non-existent, but what makes it work is the fact that both the script and voice acting is so intentionally bad that it makes everything about this game awesome. I cannot really explain why on what makes the script good. You just have to check it out yourself. Every eighties action movie tropes is in here, and it is something that has to be seen to be believed. If there is one downside about the script, it is that the one-liners Rex says tend to repeat themselves a bit too much, and there is not many. They play it straight, but a few winks here and there keeps it light. Thankfully, the game itself is fantastic as well. 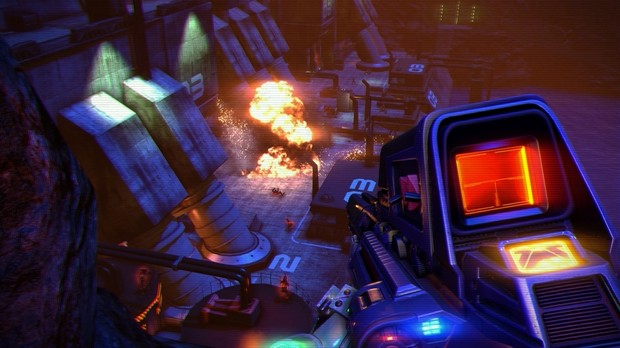 If you played Far Cry 3, you have some idea of what to expect. The only difference is that stealth takes a back seat in Blood Dragon. Stealth is still an option, and you get a neon bow for use, but it is meant to be played with guns blazing. Each gun is a blast to use, and with the upgrade system, they become better than before. That sniper rifle that you use can use explosive rounds, and you are free to cause as much chaos as you want. That became my main weapon. There are collectibles o help your weapon acquired upgrades. You can find VHS tapes, doctor notes, and TVs. Once you find your favorite weapons, you will end up unlocking the attachments so you can use it to its full potential. However, there is no skill trees like in the original Far Cry 3 game. One of the things I was worried about was the fact that all this neon eighties action would get tiring after a while, but thankfully that is not the case. The main event in this game is the Blood Dragon themselves. They are basically dinosaurs with neon lights all over their body. They are tough to kill, and they can do a great deal of damage, especially their laser eyes.

The most Metal screenshot ever in gaming

I played Far Cry 3: Blood Dragon on medium and it took me about seven hours to complete everything. This includes doing all the side missions, collecting all the collectibles, and finishing the story. I only died a few times, and that was towards the start of the game. Other times was failing to save a hostage. Seven hours may not be a lot, but giving that games now are sixty dollars with less game play, the $15 price point is a good deal. That is not to say everything about this game is amazing, there are a few graphical glitches, nothing game breaking, but animals can disappear during the attacking animation, the AI can get spastic sometimes, and the explosions don�t explode properly. One of the final missions would have been better, but worst of all is that there is no carry over or new game plus. You will not get to use the weapons are have earned in the way that you wanted to. Therefore, if you do everything the game has to offer before doing the final missions, and you upgraded your favorite weapon to the max, you will not get to use it as long as you wanted. I was hoping since that Far Cry 3 did the same thing; the developers would learn not to do it again. They took what they had, priced it right, gave it a decent length and they should be applauded. This is unlike anything you have ever seen. This puts other $60 games to shame.
Login to vote this up!