Call of Duty has become something of a phenomenon in the Gaming industry. The series' is almost consistently winning awards, breaking sales records and being released to widespread and critical acclaim. Admittedly, I missed Modern Warfare and the original Black Ops when they made a splash earlier this generation because I haven't been interested in first person shooters since their earliest incarnations on DOS PCs. However, I wasn't content to be on the outside looking in and with the purchase of my shiny new Wii U I decided to finally take the plunge and see just what all the hullabaloo surrounding the series was and I've walked away from the experience with mixed feelings.

Today's blog is going to differ from my regular format because this game requires no introduction to the vast majority of the gaming public. Chances are you've already chosen a firm stance in regards to the Call of Duty franchise and my words won't sway you either way. Nevertheless, I felt the need to organize my thoughts online in hopes of starting a dialogue about Black Ops 2. 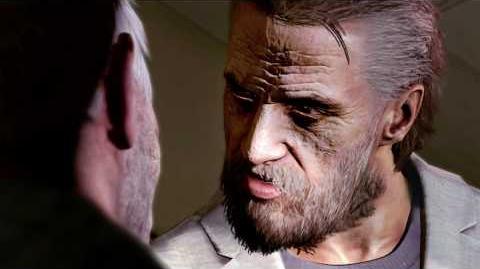 "Are you looking at me?"

The first thing that leads me to scratch my head in confusion is the game's plot. Some people may accuse me of wanting too much from what should essentially be videogame junk food but I don't think it's asking too much for a game's story to at least be enjoyable. Instead Black Ops 2 does everything in it's power to deliver a very basic revenge story in the most convoluted fashion imaginable. The game feels the need to shift perspective between characters and settings to the point of disorienting the player. The game's antagonist sees an unrealistic rise to power and his character suffers from an extreme lack of motivation. Menendez's lofty goal's seem entirely disproportionate to his reasons for having them in the first place.

I was really glad that the developers aimed to have a smooth running game. Black Ops 2 seemingly runs at a consistent 60fps and that really complements the action on screen. Another positive note for me was just how much diversity there was to be found in the gameplay. The game delivers one action-packed arcade sequence after another. You'll operate such a wide variety of futuristic military technology and it really helps to keep the core experience from becoming stale. However, my lack of ability did hamper my experience and even on the easiest difficulty I found myself dying frequently. I couldn't help but think that the action would be much better framed and that the opposition would be much more manageable if the easiest difficulty level was played on-rails.

I'd like to stress that I still had a lot of fun with this game. It's certainly not my favourite game on Wii U but I certainly don't regret my purchase. Call of Duty is obviously competently made and I can concede that any gripe I have with the game may simply stem from the fact that I'm not part of the series' target audience. Regardless it's a franchise I'd like to maybe revisit in the future. I'd also like to hear from you guys, is there anything keeping you from getting the most out of Call of Duty? Let me know in the comments below.