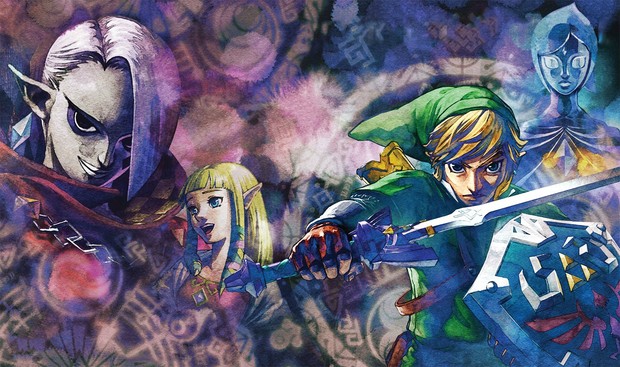 The cast
The Zelda series is defined by character like no other series in gaming. Thanks to Ocarina of Time, "Hey! Listen!" is essentially part of the cultural lexicon. SS is no slouch in this department and, in fact, it ups the ante over previous games.

Some of the characters seen in SS are so unique to the series that I cannot help but love them. The Old Lady in the Sealed Temple has the same presence as the monk in those old Kung Fu films. She speaks in riddles and pushes Link to spiritual growth. Fi is my second favorite companion character; Midna still holds that title. I really enjoyed Fi's character arc and her interpretive dance was always fun to watch. By the end of the game, Groose had evolved from a complete douchebag to a likeable character. I love the scene in which he realizes that he's not capable of being the hero like Link is. He seems a bit bummed, but moves beyond it and becomes a better person.

That brings us to the most fabulous villain ever, Girahim. Link has never had such an interesting and fun villain to interact with. Ganon/Ganondorf is plain evil and, honestly, not that interesting. Girahim, on the other hand, is a Bond-styled villain. He oozes confidence and menace. There's nothing quite like him in the series; thus, he's quite refreshing and I enjoyed seeing him whenever he appeared.

Challenge
If I had to name one major disappointment with the Zelda series of late, it would be the difficulty level. Rather, it would be the lack of difficulty. As much as I love Twilight Princess, those boss battles were fun but in no way challenging. Skyward Sword returns the series to its previous level of difficulty and then intensifies that with much more challenging puzzles. I really hope that Nintendo keeps this level of challenge in future titles. I really enjoy games that challenge players to improve and then reward that growth. I thrive on it.

In conclusion
Eiji Aonuma's team has done a superb job on Skyward Sword. It has some of the best design and creativity the Zelda series has ever produced. They've created an amazing groundwork for future titles in the Zelda series. I cannot wait to see what they create next, free of the constraints of the Wii hardware.
Login to vote this up!